Congratulations to Annette Wrafter our first winner of a pair of tickets for the 1st August. There are 2 more pairs of tickets to be won by answering a new question below 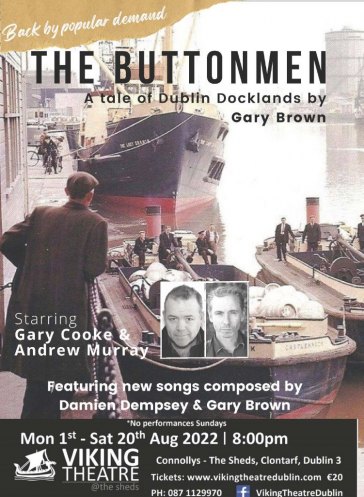 The Buttonmen is a tale of Dublin’s docklands written by native Dubliner, Gary Brown. It centres on two brothers Dessie and Gino Dunne, both dockers. Dessie the older brother is a Buttonman. The “Button” gives Dessie privileges and status over other dockers. Dessie loves the docks and the life of a docker. He connects with the history, customs and traditions of the place. Gino the younger brother on the other hand is a non “Buttonman”. He has no real love for the life of a docker and rails against what he sees as a degrading and uncertain way to earn a living. Set in the early 1970’s change is coming to the docks of Dublin and lurking beneath the story of these two brothers is a dark underbelly of jealousy and addiction. As they talk and sing about their life on the docks, fear and danger are never far away. The Buttonmen features new songs written by Gary Brown and internationally acclaimed singer-songwriter, Damien Dempsey. The play stars Gary Cooke as Dessie and Andrew Murray as Gino.

Tickets are limited for each show and can be purchased from the Viking Theatre website: vikingtheatredublin.com

“A great night out “ Noel Pearson, Film and theatrical producer “Not to be missed” Joe Duffy, RTE presenter

To be in with a chance to win a pair of tickets  – all you have to do is answer the following question:

Ringsend is on which side of the river Liffey?

Send your answer with SeniorTimes in the subject bar to: THIS EMAIL ADDRESS

5 Winners of Mindcrafting – How to Mentor Your Ageing Mind announced