In the latest in her series of writers in these islands, Lorna Hogg profile the hugely popular historical novelist Ken Follett 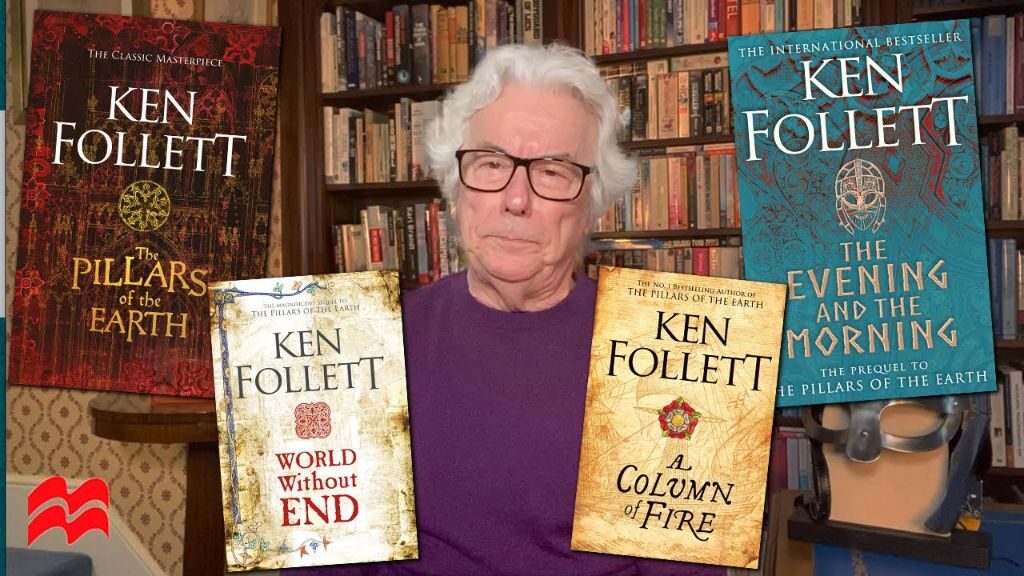 He has written  36 books, of which he has sold 170 million copies in 80 countries, in 33 langauges. Three of his books have been turned into television mini series – in  which he has had two cameo roles. He has been awarded  a CBE, is a Fellow of University College London, and is active in many literary charities – and also an enthusiastic bass guitar player. So, if you harbour ambitions to write a best seller, Ken Follett is one of the best authors to ask how it is done.

He is generous with press access and information on his workstyle. At a recent presentation at the Foreign Press Association, London, he stressed how much he enjoyed the European Friendship Tour he took with three other authors in 2019, to reassure European readers that ‘we still love you’. However, it quickly becomes obvious that disciplined and demanding research and planning play a major part of his success.That fact impresses some rather patronising book reviewers, who nevertheless concede admiration for his thorough preparation.

Follett was born on 5th June 1949, in Cardiff, the son of a  tax inspector. He was later joined by a brother and sister. His parents were both staunch Plymouth Bretheren believers, and Ken’s childhood contained no films or television. He enjoyed reading, and developed a stong imagination. The family later moved to London, where he applied himself to his studies, and went on to read philosophy at University College London.  He also developed strong political Centre Left convictions, which still remain in his life.

Follett married his first wife, Mary Elson, in 1968, and they had two children. In 1970, he took a post-graduate course in journalism and joined the South Wales Echo. However, in 1973, he left to work in a small London publishing house, Everest Books of which he later became Deputy Managing Director. He has joked that he started writing in to pay to fix his car  – The Big Needle was his first novel. Major success followed with the 1978 spy thriller Eye of the Needle, which was set in World War Two. It sold 10 million copies and earned him the 1979 Edgar Award for `Best Novel’ from the Mystery Writers of America.

Follett soon became known for spy thrillers, including The Key to  Rebecca, A  Dangerous Fortune and A Place called Freedom.’ He moved to thrillers with Jackdaws, also with a World War Two setting, and The Hornet Flight  (2002) His personal life was also changing. He and his wife divorced, and in 1985 he married Daphne Hubbard, who served as Labour MP for Stevenage from 1997 until 2010. Their life in Hertfordshire now includes his two childen, three step children –  and two Labradors.

In 1989 Follett started the form of writing for which he would become internationally famous – epic novels, which in turn grew to sagas. Pillars of the Earth (1989) told the story of the building of  a medieval cathedral, in a small town, Kingsbridge, in a time of social anarchy. Undoubtedly helped by his own interest in and visits to English cathedrals, it made  the best selller lists, and became a TV mini-series. World without End (2007) is set a hundred and fifty seven years later, taking the story through The Black Death. Column of Fire moved the story to the religious wars of Elizabethan times, and Kingsbridge’s growth following the Dissolution of the Monasteries. His new book, The Evening and The Mornin’ (2020) is a prequel – we go back to the Kingsbridge of 1000, the time of  The Dark Ages.

So just how does one write a best-seller?  Surprisingly, readers often offer ideas, such as ‘you ought to write about…’ or ‘I had an idea..’ However, Follett points out that the idea may offer one or two dramatic incidents,but he knows that his novels needs some fifty up  to one hundred dramatic scenes to move the story forward.

On the first day of writing a new book, he sits down and thinks about its context. In the case of the Kingsbridge saga – he questions what the town was like at that stage. How did it develop? How did the market place and cathedral grow? What was the conflict like, between those who wanted development – a bigger bridge, a larger cathedral – and those who wanted things to remain as they were, or return to the old  days? These ‘notions’ will produce some fifty to one hundred scenes which will drive the story forward.

On Day Two, he asks ‘what happened before and after these changes?’ The story grows organically, he explains, constantly creating dramatic scenes – so that it is constantly offering the reader something to think abous. Focus is constantly needed – from remembering a character hair and eye colour, to relationship details and dates.

Drawing in the reader

Follett’s writing draws us in because he has the ability to paint a picture of the age in which it is set. That requires considerable research, on which he spends at least a year before writing. His travels for The Evening and The Morning took him to the splendid Bayeux Tapestry, in Normandy. As well as the famous battle, the beautiful art work shows scenes of everyday life. From scenes of log chopping, hawking and hunting, to the detail of passengers wading out through shallow water to board boats – images of contemporary life are formed.

He points out that we don’t have much detail remaining from the times – but admits with  a grin, that ‘Historical novelists can make it up!.’ His research is wide ranging, from visits to the Viking Museum in Oslo to view the the famous dragon headed boats and contemporary carvings, to an expert in ancient coins and a forge master.

Follett admits that he has long been interested in politics and the abuse of power, and this is reflected in his work. ‘My stories are often about fighting, freedom and civil rights, right up to the Suffragettes.’  Evening and Morning is about a fight for justice, in the Dark Ages, a time when there was no rule of law, just the power of the local Chieftain or Lord. One of the theme is the conflict between the Anglo Saxons and the Vikings.

We sometimes think of the latter as romantic  adventurers. However to locals, they were violent invaders, traders as well as slavers, who ‘for hundreds of years treated (what is now) the United Kingdom like  a shop’.   Then there were the Normans, ‘at that time possibly the most sophisticated society in the times – waiting their moment.’

His interests and travel over the years have given him a love of Europe, and he was a vocal opponent of Brexit. He is at ease with European culture – and his heroine Ragna, in The Evening and the Morning, who arrives in England to marry, finds it a shock after the civilsation of Normandy. Europeans certatinly love Follett’s books  – he has inspired a statue in Vitoria-Gasteiz, in the Basque Country, a fact which his friends find  ‘hilarious’, but of which he is very proud.

He allows for three years to produce a book. One year to research and plan – most of the research is done in the first year. ‘Then, I work on the first draft for about another year, and it is sent to friends and experts in London and New York, plus experts in history, police, scientists..having experts check my work saves me from quite a lot of errors..’

Next comes the edit and any re-writing. He notes, when typing it out, how sentences could be made shorter, so that the book is improved, and which will aid the all important movement of the story. He also watches out for that common problem of authors – ‘ideas bubbling around’ for future books. He avoids working on them, preferring to keep his enthusiasm focussed. And yes, he has an idea for his next book – but won’t talk about it.

He writes long books – the average is about 900 pages.. ‘Pillars of the Earth had to be a long book – think about it. But the thing about it is that it stays with people. I read a lot –  and a few weeks later, I couldn’t tell you the plot. I was attracted to the idea of writing a book which would stay in people’s memories…. motto   – “Never read a boring book – especially a long boring book1’’’

With One in Eight Over 75 Years Suffering from Heart Valve Disease, People Urged to Have an Annual Stethoscope Check

Are you hearing a ringing in your ear? Here’s how to manage it