Aubrey Malone on the history of Oscar snubs, curses and scams 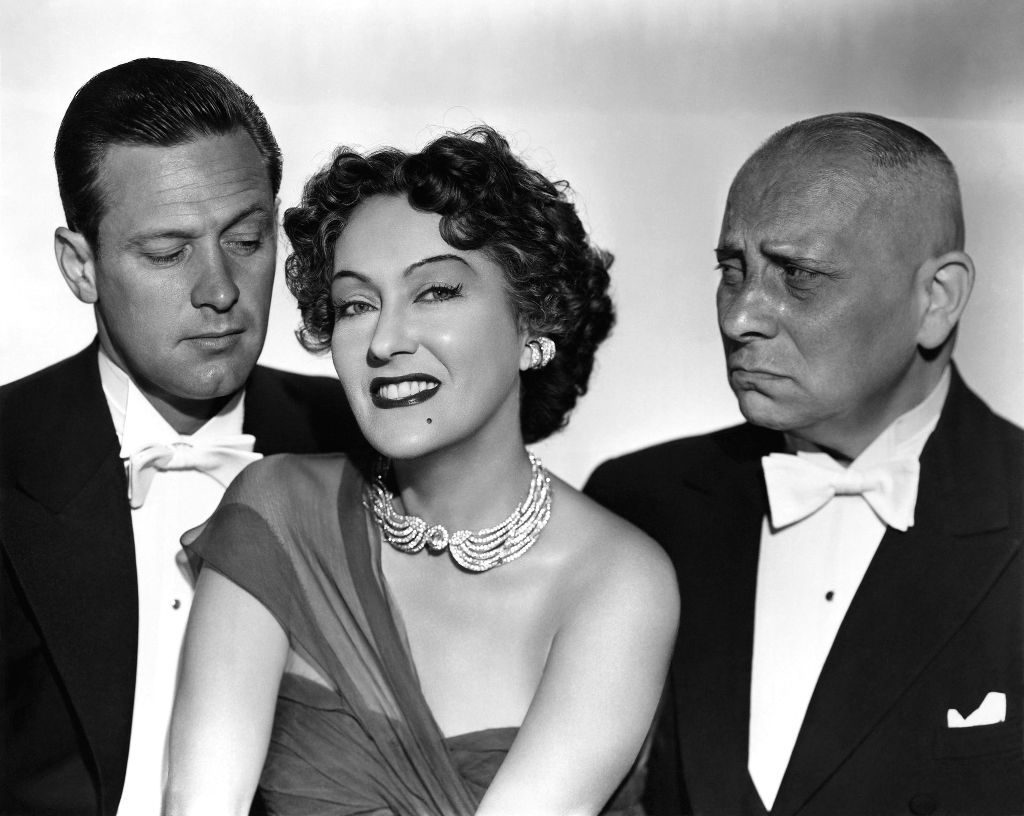 Barbara Stanwyck, seen here with her co-stars William Holden and Erich von Stroheim, was devastating as the ankle-braceleted Phyllis Dietrichson in Double Indemnity also lost out in the Best Actress race that year, to a predictable Ingrid Bergman in Gaslight. Stanwyck was another star to – criminally – never win an Oscar in her illustrious career

When Faye Dunaway read out the wrong name for last year’s Best Film Oscar after being handed the envelope with the misleading information on it by Warren Beatty, 89 years of Academy efficiency seemed to be wiped away in the blink of an eye.

La La Land became Lapse Lapse Land. The sun shone on Moonlight. And red faces all around were the order of the day. The accountants behind the error took the main hit but some people felt that Beatty, with all his experience of such things, should have held back for a little longer before, as one writer put it, ‘throwing Dunaway under a bus.’

Even so, it wasn’t the first time something went amiss at the annual shindig. In 1970 George C. Scott embarrassed the Academy by refusing his Oscar for Patton, saying he didn’t want to be involved in a tussle with his colleagues that amounted to a ‘cattle mart.’  Two years later Marlon Brando followed suit by saying no to his statuette for The Godfather, citing Hollywood’s mistreatment of the American Indian as his reason. For many people this was less laudable than Scott’s stance because Brando had already accepted an Oscar many years before for On the Waterfront, thereby ratifying the Academy’s value system. (His reply to this charge was, ‘We’ve all made mistakes in our lives.’)

More significantly, does the Oscar always go to the right person? Hardly. There have been more bad decisions than good ones in the event’s 89-year history. Will his years 90th anniversary of the annual beano continue the injustices? Probably. I picked out a selection of the more appalling presentations that have been made over the years, in no particular chronological order, for reasons that seemed to be about everything except the film – or star -in question

Wayne won an Oscar in 1969 for a limp performance as the eye-patched desperado Rooster Coburn in True Grit, thereby denying the likes of Dustin Hoffman and Jon Voight for scintillating performances in John Schlesinger’s Midnight Cowboy – not to mention Peter O’Toole in Goodbye Mr Chips. Everyone knew it was a Life Achievement award in disguise for the ageing cowpoke but it dented the credibility of the ceremonies hugely.

Taylor won Best Actress for an even more lacklustre performance than Wayne’s in Butterfield 8 in 1960. Once again, the reason was nothing to do with the movie because Taylor had been at death’s door with pneumonia shortly beforehand. She only pulled through due to her throat being cut open by a fast-thinking doctor. The actress that should really have won that year was Shirley MacLaine. She’d been irresistible as the unlucky-in-love elevator operator Fran Kubelik in Billy Wilder’s bittersweet comedy The Apartment. Taylor herself admitted Butterfield 8 was a terrible film and said she loathed it. In a line as acerbic as anything from The Apartment itself, MacLaine lamented the night’s injustice with a resigned, ‘I lost to a tracheotomy.’

In 1951, after Marlon Brando burned up the screen in a sweat-stained T-shirt as Tennessee Williams’ boorish Polack Stanley Kowalski in A Streetcar Named Desire, reprising the Broadway role that made him famous, his name seemed almost written on the Oscar. But Brando was a rebel and Hollywood didn’t take too kindly to rebels at that time. When Brando said he wouldn’t attend the ceremonies his goose was effectively cooked. Instead Bogie got the gold for an avuncular turn in John Huston’s lightweight The African Queen. Brando had to wait three more years before standing on the Oscar podium for what was his rightful due.

Redford won Best Director for the very ‘ordinary’ Ordinary People in 1980. He almost me to have a minor coronary in the process as Martin Scorsese’s Raging Bull, also in the running, had electrified me to my seat when I saw it earlier that year. Thankfully it has retained its status as the mother and father of all boxing movies, as well as being Robert de Niro’s finest hour as Jake La Motta. But on that fateful night in 1980 genius lost out to mediocrity.

De Niro wasn’t quite so fortunate four years previously when he was toppled for the Best Actor award for Taxi Driver in a powerhouse performance as the disaffected Vietnam veteran Travis Bickle. Finch won instead for Sidney Lumet’s Network. It was a fine performance by him but not in the De Niro league. Why did he win? Probably because he died shortly before the ceremonies took place. Death has always been a good career move in Hollywood. This was no exception. Taxi Driver was also denied the Best Picture award that year – by a children’s fairy-tale called Rocky, featuring that, um, pre-eminent Method actor Sylvester Stallone.

Newman won Best Actor for The Colour of Money in 1986, reprising his role of pool shark Eddie Felson from 1961’s The Hustler, the film he really should have won it for. He should have got one for either Hud, Cool Hand Luke or The Left–Handed Gun, the 1986 award being a retrospective debt paid to him by a guilt-stricken Tinsel town. Newman knew this too. Every year before this when he was nominated and lost he used to throw a ‘No scar’ party at his Connecticut home to drown his sorrows. When success finally came his way, he threatened to boycott the ceremony in protest. It was, he said, like a man chasing a woman for twenty years. When she finally said yes to his overtures the man went, ‘Sorry, honey, but I’m too tired.’

William Holden won Best Actor for Staling 17 in 1953 but the rightful winner should have been Alan Ladd for Shane. Ladd wasn’t even nominated that year because of a row with Paramount, the studio he was leaving after being many decades there. They weren’t impressed with this and didn’t lobby for him in the Oscar preliminaries. Internecine squabbling, in effect, caused his elimination from the race. Neither did Shane win Best Film that year, as it should have, or Best Director for George Stevens. It departed the Dorothy Chandler Pavilion empty-handed that night apart from a Cinematography award for Loyal Griggs – and even this was shared jointly with the cinematographer from another film, From Here to Eternity, which scooped almost everything going that year.

By 1992, when Pacino won Best Actor for Scent of a Woman, he should already have had a brace of Oscars on his mantelpiece. His performance as a blind man here was adequate but not Oscar-worthy. Stars playing people with disabilities always do well on Oscar night and the Academy decided it was Pacino’s time to shine. He was actually better in Glengarry Glen Ross that year. He was also nominated for that role in the Supporting category but lost out to Gene Hackman for Unforgiven. The two awards should have been flipped over. In fact, I would nearly have given the whole cast of Glengarry Glen Ross Oscars for their performances. Sadly, the film wasn’t even nominated for Best Picture or Best Director.

Attenborough won Best Director for Gandhi, one of the most boring films ever made, in 1982. Why wasn’t Steven Spielberg nominated for E.T.? Who remembers Gandhi today – I mean the film, not the man? Worthy people do not always make worthy film material. In fact, it often works the other way. Villains are usually more appealing than heroes. Gandhi also won Best Film over E.T. that year. The gala line-up of losers was compounded by the inclusion of Missing, Footsie and The Verdict – all of which knocked strips off Gandhi on the entertainment front.

Can anyone honestly say Hepburn deserved the Best Actress award for Guess Who’s Coming to Dinner in 1967 over Faye Dunaway for Bonnie & Clyde? So why did she win? Because Hepburn’s co-star and live-long lover Spencer Tracy, whom she played opposite, was visibly dying on screen. (He only lasted a fortnight after the film wrapped.) Again, like Finch in Network or Wayne in True Grit – or even Bogart in The African Queen – she nabbed the sentimental vote. In the same year, Rod Steiger won Best Actor for In the Heat of the Night. Again, it was a sterling performance but was it as good as that of Warren Beatty in Bonnie & Clyde? Or Dustin Hoffman in The Graduate?

Rod Steiger should have won an Oscar for The Pawnbroker.  He was denied by Marvin’s eccentric comic turn in Cat Ballou. Wrong decision. Of course, The Pawnbroker, dealing with the theme of the Nazi holocaust, was too discomfiting for the conservative Academy. So, apparently, was Richard Burton’s career-best performance in The Spy Who Came in From the Cold, also ignored that year. In fact, Burton was never to win an Oscar. In this he joins such luminaries as Montgomery Clift, Kirk Douglas, Alfred Hitchcock, Charlie Chaplin, Peter O’Toole and a host of other brilliant stars who somehow fell under the radar. Many of them were vouchsafed Life Achievement awards in lieu of ‘the thing itself’ to salve Hollywood’s conscience but this was small recompense. Usually it was a case of ‘too little too late.’

McCarey won Best Director for Going My Way in 1944 in yet another example of Hollywood going soft. The outstanding movie of that year was Double Indemnity, the best film noir ever made in many people’s view, mine included. But McCarey got the nod over Billy Wilder, who helmed Double Indemnity, in one of the most outrageous injustices in Oscar history. Barbara Stanwyck, who was devastating as the ankle-braceleted Phyllis Dietrichson in Double Indemnity also lost out in the Best Actress race that year, to a predictable Ingrid Bergman in Gaslight. Stanwyck was another star to – criminally – never win an Oscar in her illustrious career.

They made amends to Wilder the following year when they gave him Best Director for The Lost Weekend but I don’t think they should have given Joan Crawford the Oscar for Mildred Pierce that year. Gene Tierney, another actress who would never win an Oscar, was incredible as the cold-blooded killer in Leave Her to Heaven. Crawford said she was too ill to attend the ceremonies but after she won she made a miraculous ‘recovery,’ as only Joanie could. In fact Michael Curtiz, who directed her in the film, ended up going to her home to present the award to her in person. It propped her spirits up even better than Lucozade.

Holliday won Best Actress in 1950 for a forgettable comedy called Born Yesterday, thereby denying Gloria Swanson, who’d given the performance of the century in Sunset Boulevard.  It wasn’t Swanson that got small, it was the pictures. ‘Nuff said.

Aubrey Malone’s book And the Loser Is.. will be published shortly by Vernon Press. It’s a history of Oscar snubs, curses and scams.