Continuing her series of profiles of notable writers from these islands, and where they came from, Lorna Hogg recalls the life and works of Arnold Bennett

If association with a city or area of countryside, is the lasting legacy of a fortunate few writers, then Arnold Bennett’s `patch’ is The Potteries, or Five Towns, in Staffordshire. This area in the English Midlands was the home of china during the Industrial Revolution – and of Enoch Arnold Bennett. He was born on 27th May, 1867 in Hanley, then one of the towns making up The Potteries, and his home ground produced some of his most memorable work- including  Clayhanger and Anna of the Five Towns. 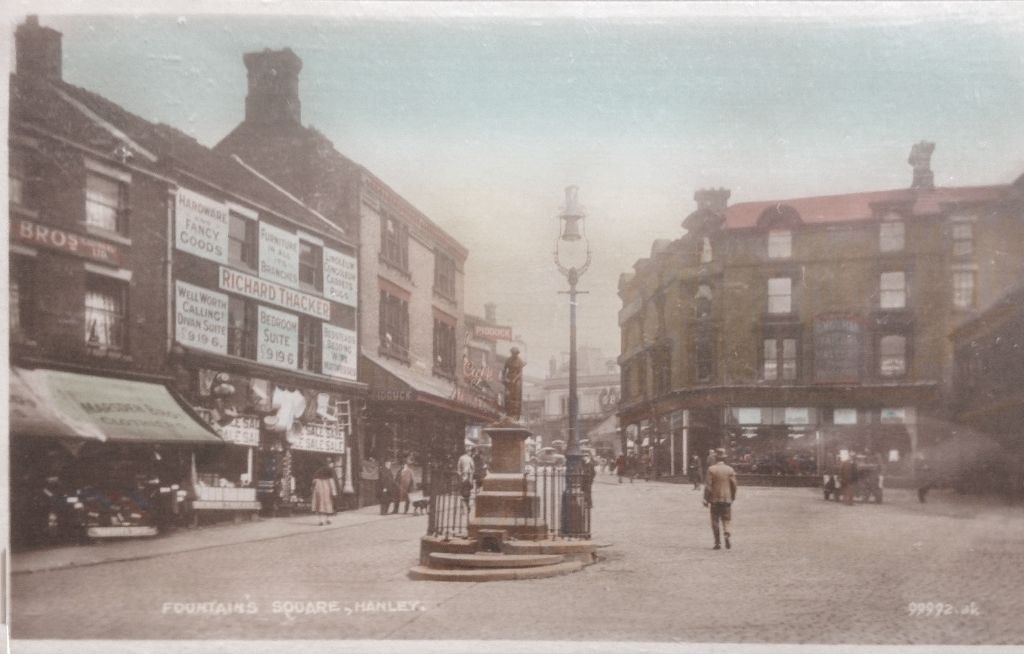 A period view of Markey Square in Hanley, Staffordshire where Arnold Bennett was born in 1867

Bennett’s own story was as intriguing as any of his literary plots. He was born the eldest child of an upwardly mobile Wesleyan family of three sons and three daughters. His father had, in addition to his drapery and pawnbroking business, trained to become a solicitor, and had high expectations for his eldest son. The boy was well educated, and harboured a desire to become an architect. This was the era at the start of free education for all, and young Arnold spent some years, with excellent teachers, at the Wedgewood Institute in Burslem, plus a spell at a Grammar School, and could have gone on to the University of Cambridge.

His father, however, had other plans for him, and young Arnold joined his father’s solicitor’s firm at the age of 16 – with his tasks including rent-collection. He also started writing in his spare time, and at 21 became a clerk in a solicitor’s practice at Lincoln’s Inn in London. His new friends there inspired him to read more widely and also to continue writing, often for magazines.  In 1894, he became the Assistant Editor of Woman Magazine.

He had retained his desire to publish a book, and succeeded with A Man from the North. (1898)  This story of a young and innocent man’s early experiences and loves in London, it apparently brought in less money than the cost of typing the manuscript. However, Bennett learned swiftly that he would have to produce popular fiction in order to earn a living. 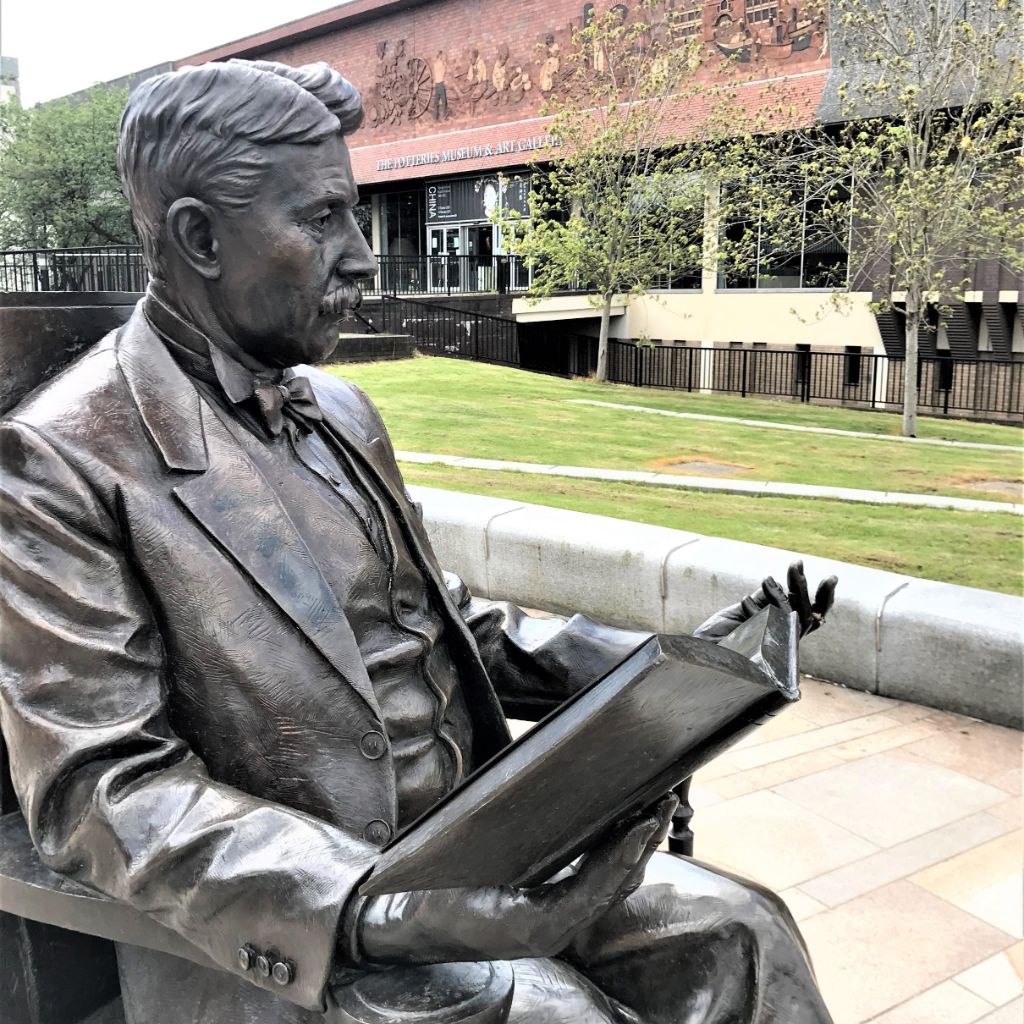 He was promoted to editor at Woman Magazine, but still saw himself as an author, even though some of his early efforts were described as `pot boilers.’ He received good notices, however, for Anna of the Five Towns (1902), with its Stoke on Trent setting. It told the story of values and expectations of life in the backgrounds from which he came. Its heroine suddenly inherits a large sum of money on her twenty first birthday, but has to come to terms with the outlooks and standards of her surroundings.  The quirky Grand Babylon Hotel was published the same year and Bennett now found some financial security. He purchased and moved to Trinity Hall Farm, where his family joined him. His father however, died shortly afterwards, and his mother moved back to Burslem. His sister was about to marry  – so as a long time Francophile, now freed of family responsibilities, Bennett decided to leave for Paris. 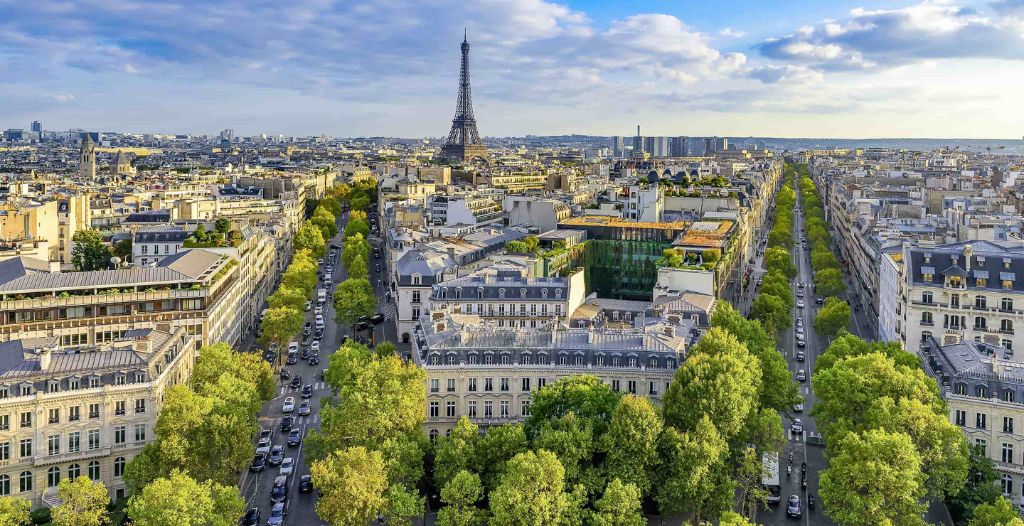 Bennett was then 35, unmarried, shy, with little confidence around women. However, when he moved to the 5th Arrondissement, and started to mingle in ex-pat and local society, he found it easier to form relationships. His literary radar remained as keen as ever.  A chance observance of a beautiful young woman laughing at an older, embittered one, sparked the realisation that the latter was once young and lovely as well. That provided  inspiration for The Old Wives Tale, a story of two sisters and their lifelong relationship. At this time he also became influenced by such writers as Flaubert and Balzac.

In 1905, Bennett became engaged to a young American girl. However, plans were suddenly cancelled when she   broke off the engagement. He was helped to recover by Marguerite Soulie, an actress whom he married in 1907 – and the success of Clayhanger proved a financial and critical success for him 1910.

A trilogy within one volume, it tells the story of Clayhanger, who inherits a family business in a Victorian provincial town. It pits a hard-nosed self-made man and businessman Darius, against his son Edwin, who of course has a different generational view and set of values. A gentler soul, Darius wanted to become an architect (which  Bennett had wanted to do) and didn’t conform to the standards or even outlook of his father. The second volume,  Hilda Lessing tells the story of Clayhanger’s wife Hilda, and her early life as a shorthand clerk in London and Brighton, and her disastrous first marriage. The third volume, These Twain highlights the differences in outlooks of the two – many inspiring marital clashes.  The final volume, The Roll Call details the life of Clayhanger’s spoiled stepson George. The boy grew up in financial security, but now faces World War 1. In these stories, Bennett’s detailed observance of the standards, manners and outlook of the characters led to him being dubbed the ‘Laureate of the Commonplace.’

In 1911, he visited the  United States, and achieved even further financial security, with deals on book and publication rights. He could now consider himself financially secure. In 1912, he returned to England, purchased a home, Comarques, in Essex – and developed his ambition to become a playwright. Milestones proved to be a popular success – telling the story of several generations of a family, and was written in collaboration with Edward Knoblock.

During World War I, Bennett joined the Ministry of Information, then run by Lord Beaverbrook, whom he knew – and who called upon him to write Allied propaganda. Bennett’s role grew with the war’s progress, and he gradually oversaw the Ministry so successfully that he was later offered, but declined, a Knighthood. Instead, he returned to his new area of work – playwriting, and had work performed at the Lyceum Theatre in London. His enthusiasm for new art forms grew – he started writing popular self-help books – including  How to Become an Author  and also retained his journalistic instincts.  He continued to learn and be influenced by contemporary authors – such as Joyce, and felt strongly that literature should reflect the realities of modern life.

His marriage, however, was quietly failing, and he separated from his wife in 1921, living the rest of his life in West London- and became a newspaper columnist.  He then met and courted a young actress, Dora Cheston. However, Marguerite refused him a divorce when he wanted to marry the pregnant Dora, so she adopted his name by Deed Poll. They had a daughter, Virginia May in 1922. Bennett’s prolific literary output continued. Overall, it included some 34 novels, seven volumes of short stories, various self help books and 13 plays (some collaborations) plus contributions to 100 newspapers and periodicals. He was also a generous supporter – and sponsor, of new talent.

In January 1931 he and Dora went on a short trip to France, and Bennett unwisely drank tap water. Typhoid followed and he died on 27th March of that year. He was recognized as one of the more noteworthy novelists and forward thinking writers of his generation. However, succeeding generations have been more critical. Many modernists disliked him. It might have been due to his somewhat Victorian view of women – which of course, helped to inspire his world view and forensic representation of life and ‘patch’. 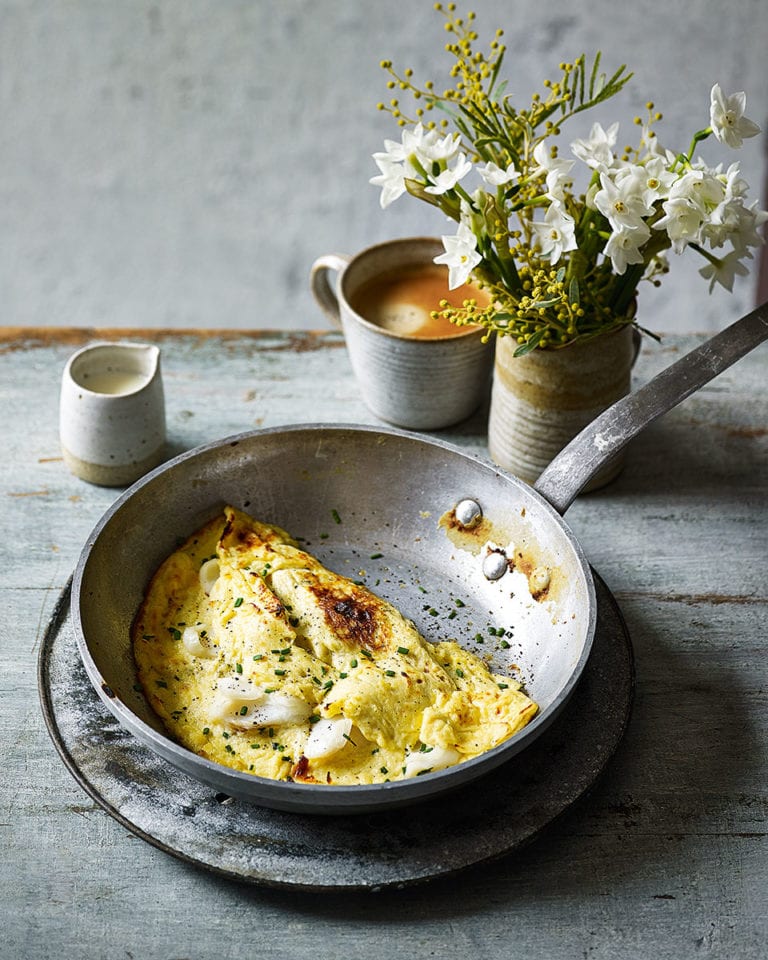 Eggstra, read all about it: Omelette Arnold Bennett

An easy-to-cook adaption of the classic dish by Delia Smith. Serves two or three

This magnificent omelette of fresh eggs and smoked haddock was the favourite of  Arnold Bennett when he resided at The Savoy Hotel, London  for a period in his career and is said to have written the novel Imperial Palace during his residency. The novel is based on day to day events at a large hotel and is said to be based on life in The Savoy. It was published in 1930, the year before Arnold Bennett’s death.  Omelette Arnold Bennett still features on the menu of The Savoy Grill.

Omelette Arnold Bennett is an open omelette, topped with smoked haddock in a creamy sauce, and grated Parmesan cheese.

To begin with, measure the crème fraîche into a medium saucepan and bring to a gentle simmer.

Add some freshly milled black pepper but don’t add salt yet because the haddock can be quite salty. Then pop in the prepared fish and let it poach gently, uncovered, for about 5 minutes.  Meanwhile, make up the sauce: separate one of the eggs, breaking the yolk into a small bowl and reserving the white in another bowl. Add the cornflour to the yolk and whisk well. When the fish is cooked, use a draining spoon to lift it out into a sieve placed over the saucepan, to allow the liquid to drain back. Press lightly to extract every last drop of liquid, then place the sieve containing the fish on a plate.

At this point pre-heat the grill to its highest setting. Now bring the liquid in the pan back up to simmering point, then pour it on to the egg yolk, whisking all the time. Then return the whole mixture to the saucepan and gently bring it back to just below simmering point or until it has thickened – no more than one or two minutes. After that, remove it from the heat and stir in the cooked haddock, tasting to see if it needs any salt. Next, whisk up the egg white to the soft-peak stage and carefully fold it into the haddock mixture.

Now for the omelette. First beat the 4 remaining eggs with some seasoning. Next, melt the butter and oil in a frying pan until foaming, swirling them round to coat the sides and base. When it’s very hot add the eggs, let them settle for about 2 minutes, then begin to draw the edges into the centre, tilting the pan to let the liquid egg run into the gaps. When you feel the eggs are half set, turn the heat down and spoon the haddock mixture evenly over the surface of the eggs, using a palette knife to spread it. Now sprinkle the cheese over the top and place the omelette pan under the grill, positioning it roughly 5 inches (13 cm) from the heat source. The omelette will now take 2-3 minutes to become puffy, golden brown and bubbling. Remove it from the grill, let it settle and relax for 5 minutes before cutting into wedges and serving on warmed plates.

This recipe is from Delia’s Complete How to Cook, The Delia Collection: Fish