‘When the nights were long, the music was loud and everything seemed possible’

Ballpoint Press, a Bray based publishing house, has just launched a book of essays recounting the dance mania that swept over Ireland throughout the 1950s and right up to the 1970s.. P.J. Cunningham, editor and publisher, in company with fellow editor Joe Kearney, sent out the call earlier this year for memories relating to dancing experiences within this timeframe. The response includes chance meetings and mischief together with tales that are filled with humour. On a historical level, this significant period in the social culture of Ireland was back-dropped by worldwide revolution and unrest. An era dominated by the war in Vietnam, the Cuban Missile Crisis and which saw the assassinations of U.S. President John F. Kennedy and Martin Luther King. In Ireland, particularly during the 50s, people were dealing with crisis of a more personal nature. There were plenty of lonely bachelors eking out a living in rural communities and the Catholic Church had a huge influence on the moral tone of the country.  Interestingly, 2017 also marks the fiftieth anniversary since Patrick Kavanagh passed away, a much loved poet whose documenting of life spent working the soil, especially in works such as ‘The Great Hunger,’ is a searing portrait of loneliness and devastation resulting from the isolation that accompanies rural living. Kavanagh’s poetry and prose is a good place to begin understanding life in rural Ireland at this time. 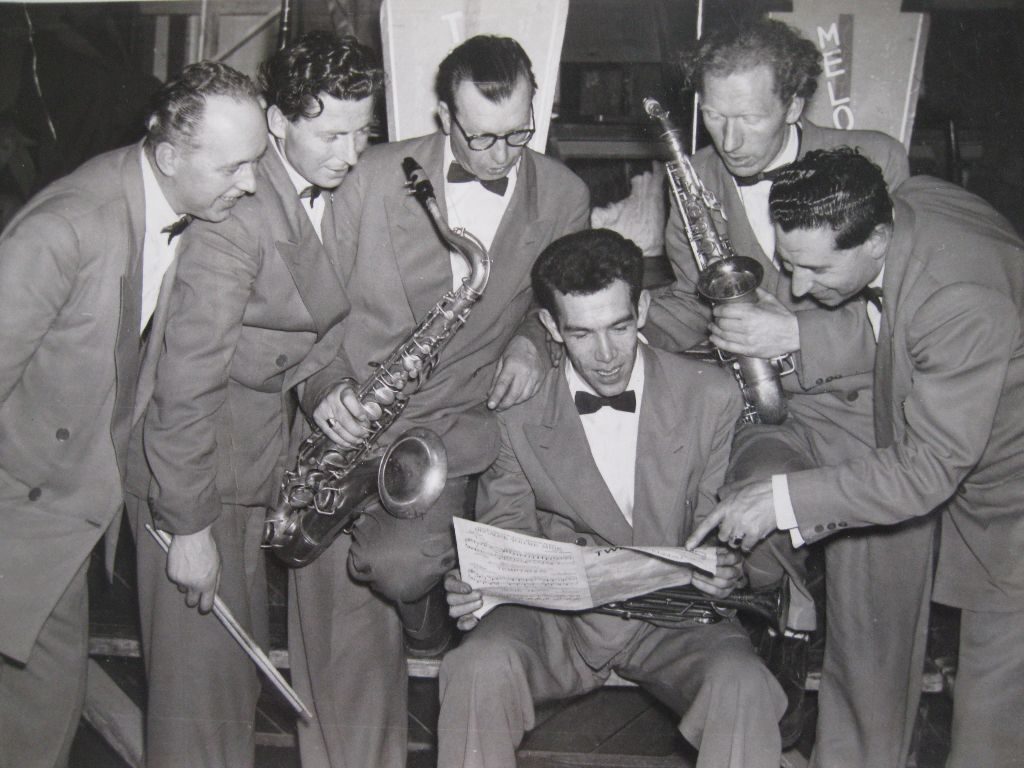 The ever popular Melody Aces

‘From the Candy Store to the Galtymore’ is a collection of essays recounting the stories of well-known people as well as ordinary folk. There are stories here from Britain as well as Canada and New York. This inclusive element is a major strength of the book. It ensures that there’s a number of perspectives and viewpoints. Between the covers of this publication, the reader will find personalities such as Margo 0’Donnell (the ‘Queen of Country and Irish’) and Fr Brian D’Arcy, chaplain to the stars.  One of the many lovely anecdotes recalled by D’Arcy concerns a time when Brendan Bowyer toured in England and received a major musical award. At a gig in Liverpool, Bowyer was supported by the Beatles. Lennon and McCarthy were reputed to have been ‘in awe’ of Bowyer and the Royals, particularly coveting their luxury touring wagon. When they expressed their envy and the doubt concerning whether or not they would ever be able to afford one like it, Bowyer told them to ‘keep writing your songs and who knows, maybe one day you’ll make it.’

The stories in the book come from all over the country. County Offaly is represented by myself (really thrilled to be included) and also by other Offaly kinsfolk such as ‘Ricey’ Scully, a musician turned Impresario. He tells about the night U2 played at The Garden of Eden in Tullamore. Paul McGuinness, their manager, repeatedly told Ricey that his group were going places, despite the low numbers who turned up to hear them’

The stories are not all filled with humour however. Eddie Marmion (County Louth) remembers the night of July 31st, 1975. Eddie played with a band called Country Sounds and on that night, both his band and the Miami Showband played in Banbridge. It was a fateful night as it turned out. Eddie’s session ended an hour earlier than the Miami’s. He tells of passing the spot of the massacre minutes before the illegal checkpoint was set up by loyalist para-militarists. Eddie still bears the survivor’s guilt that haunts him to this day.

The sixties may have been termed ‘swinging’ (in everywhere from London to San Francisco), yet, in Ireland, a woman’s place was still very much in the home. Who can forget the Late Late Show’s ‘Housewife of the Year’ competition?  The ideal woman/wife/mother was firmly cast in the role of homemaker, the ‘Angel in the House’ concept, epitomised by the Victorian poet written by Coventry Patmore. The poem was published in 1854 but it could well refer to the role of women in sixties Ireland also.  However, paradoxically, this was a time when the country jived and quickstepped the weekend away. Women removed their headscarves, sprayed on the hair lacquer and the eye-liner and slipped on their stiletto dancing shoes. While Ireland waited to enter the E.U. and become more outward looking as a nation, young men and women alike decked themselves out in their best dancehall finery each Friday, Saturday and sometimes Sunday night too.

‘From The Candy Store to the Galtymore’ is a social history document recounting those times when as many as 800 professional and semi-professional showbands criss-crossed the country. Names like Joe Dolan, Dickie Rock or Brendan Bowyer could scarcely keep up with the nation’s insatiable demand for the throbbing beat of an electric guitar or the sight of an energetic musician thrashing the life out of a set of drums. Ireland had well and truly left the Céili era behind. Electricity gave rise to amplification and this new sound, literally ‘electrified’ the listeners. It was as if the country was gripped by an obsession. Dance became the means of expression, a release from the humdrum world of farm or factory work. It gave many young people something to look forward to, something to put on the ‘glad rags’ for each weekend. There was also the hope, of course, of meeting a sweetheart and indeed, many romances began under the pulsating glitter-ball in the local ballroom.

The radio too played its role. New musical influences from across the Atlantic began to filter into Irish homes.  The Showband era collided with Rock n’ Roll, jive and twist.  The first popular band is credited to The Clipper Carlton (Strabane). Their style was to constantly move about the stage. Huge crowd drawing magnets were Tom Dunphy and the Royal Showband (Waterford). Brendan Bowyer’s ‘The Hucklebuck’ is an anthem of the time.  Dickie Rock performed big ballads (his voice today is as good as ever to this day). In 1967 (the year Patrick Kavanagh passed away), Dickie Rock represented Ireland in the Eurovision Song Contest. Other bands popular at the time included The Dixies and Donie Collins (Cork) and Billy Brown and Derek Dean (The Freshmen, Antrim).

In the late sixties and early seventies, rock, blues and soul entered the arena. The new bands were The Arrows, The Real McCoy and The Chessmen. Country n’ Western style singer Big Tom and the Mainliners, together with Larry Cunningham and the Mighty Avons provided marquee carnival dance attractions. Also, ’mega’ attractions,’ such as Margo, Philmena Begley and Brendan Shine, ensured that punters were spoilt for choice. ‘From the Candy Store to Galtymore’ is an important addition to social history in Ireland. It will be of interest to anyone who danced throughout this era when the night was filled with rhythm and excitement pulsed through veins at the prospect of a good ‘jive’.  It will also chime with anyone who’s read William Trevor’s ‘Ballroom of Romance,’ a masterpiece in terms of capturing, as Kavanagh also did, the expectations and disappointments attached to the weekly escape from the daily grind and drudgery. Set in rural Ireland in the 1950s, The ‘Ballroom of Romance,’ focuses on Bridie, a woman who has been attending the local dance hall for years, hoping to find a good husband who can help work her family’s farm.  However, her only prospects seem to lie with alcoholic Bowser Egan as all the good men have either been spoken for or have emigrated.

As I’ve said, it’s a pleasure to be included in Ballpoint’s publication. Hopefully, my own memory will resonate with readers. Can there be anything more joyous than dancing?

With permission from the publisher, I’m including an extract here from my own inclusion in the book:

“……..And then, miraculously I was 16 and it was my turn to shine. For the big occasion, my sisters came down from Dublin with a new sleeveless dress and matching jacket, silky seamed nylons, make up and perfume. There was also a new pair of pointy-toed shoes with high heels.  I remember the dress well. It had tiny pink roses on it and a white collar. It didn’t seem at all odd that I wouldn’t be wearing a dress made by my mother. Although she’d often made dresses for me, on this occasion I was treated to a shop bought outfit. One of my sisters tied my hair up with pink bobbles and the other put make up on me, my first time to wear it. Blue eye-shadow and mascara set off a light dusting of face powder.  My lipstick was a bright colour and shiny but it tasted strange, like plastic, and I worried that it might stain my teeth.  While I was being prepared for dancehall bliss, I was bombarded with the ‘dos’ and ‘don’ts’ of dancehall etiquette.

I was never to refuse a boy’s request to dance (I never have and never would either). I was to be careful with the slower dances and not allow any liberties. My partner’s hand could travel no lower than mid-way down my back and I was to resist any efforts to be pulled into a tight embrace. On no account was I to accept the offer of an orange or lemonade. On the face of it, having a mineral with a boy seemed innocent enough but they assured me that it had deeper significance attached to it. That if I were to go for the mineral, it meant the boy had another agenda. Mother had already advised me about these subtleties.

When I was completely ‘done up,’ I stood on the fitting chair in the parlour-cum-bedroom and looked at myself meticulously in the mirror over the small fireplace that every room in that council house had. I saw the backs of my legs, noting the seams of my stockings were straight.  I saw that the dress came to just above my knees and when I stepped down and looked at my face and hair, I could hardly credit it was me. I thought my sister had been a little heavy-handed with the make-up but she’d assured me that by the end of the night, it would be well worn off.

As it happened, my first dance experience was in a giant marquee, erected because there was a festival on.   It was late autumn and the weather had turned cold. Hugo Duncan and The Tall Men were playing. We set off, the ‘Three Musketeers’ mother christened us. She stood at the gate waving, watching us all the way down the street…” (Extracted From the Listening Wall to the Dancehall).

Finally, a reminder that there are a number of events planned for Patrick Kavanagh’s 50th anniversary.  The Rural & Literary Resource Centre at Inniskeen, Co. Monaghan which houses an archive of Kavanagh’s work, will host readings by the poet’s graveside on 30th November. Prominent Co. Monaghan writers will each read a favourite Kavanagh poem. The Centre, formerly St Mary’s Church, has a series of paintings which commemorate Kavanagh’s epic poem ‘The Great Hunger.’ It also has a series of panels depicting ‘A Christmas Childhood,’ one of the nation’s favourite poems. In 2000, The Irish Times listed 100 favourite Irish poems. There were ten of Patrick Kavanagh’s poems in the listing.

In search of Bigwig and friends..