He has been hailed as the greatest Irish poet since William Butler Yeats.

To celebrate his legacy, Seamus Heaney HomePlace a new £4.25 million arts and literary centre has opened in Bellaghy, where he grew up and where many of his inspirations nurtured. At the opening, its artistic director Sean Doran said he believes it to be “the first purpose-built centre dedicated exclusively to literature on the island of Ireland”

Although Bellaghy is in County Derry it is positioned just above Lough Neagh making it actually closer to Belfast than to Derry city. Seamus Heaney’s wife Marie, who was at the opening, came from Ardboe small village on the western shores of Lough Neagh and so it was an area Seamus got to know well and wrote of it in ‘A Lough Neagh Sequence'(Door into the Dark) and ‘Toome (Wintering Out). 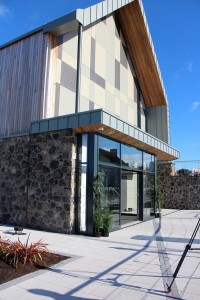 HomePlace is built on the site of the former RUC station in Bellaghy. It was designed with what the architects refer to as ‘a subtle nod to the site’s historical past’ and so included an elevated viewing platform across the surrounding countryside, a landscape which so inspired Seamus Heaney. The permanent exhibition fills two floors with personal stories, family photographs, the recorded voices of friends, cultural figures, world leaders and the voice of the poet himself reading his own words. His pen and words make exhibits hanging on nylon strings. It is all fully interactive using the technologies of video, of audio, of touch screens and  there is even a recreation of the poet’s Dublin study. He lived in Sandymount, Dublin, from 1976 until his death.  The new centre includes a café and a shop selling gifts, souvenirs, arts and crafts and an opportunity to buy Seamus Heaney books. The Belfast poet Michael Longley said “This building will become an echo chamber for the poets beautiful lines.”

There isn’t a great deal to Bellaghy, I walked it. slowly, in perhaps a quarter of an hour. At one end there is Bellaghy Bawn, a fortified house  dating back to the early 17th century when the town was one of many built and settled under the control of the Vintners Company of London (hence the London in Londonderry) as part of the Plantation of Ulster. There was the Bellaghy Temperance Masonic Lodge which seemed to be closed, so I crossed the road to Doc’s Central Bar which was open. There we drank a toast to Seamus, who they say, enjoyed a glass or two of whiskey. Unfortunately for my research, ‘Doc’ Dotherty the owner said that as far as he knew, Seamus never set foot in the place. I told him about the bar I came across in Madrid that displayed a sign which read: ‘Hemmingway never drank here.’ With the new Seamus Heaney HomePlace centre, all may change for Bellaghy. According to Ursula Mezza of the the Mid Ulster Council, the projected target is to have 35,000 visitors per year.

The larger shopping towns in the area would be Magherafelt and Cookstown. Magherafelt bus station was fondly remembered and mentioned by Seamus in Stepping Stones for school time reunions with his mother

The Heaney home, as Seamus grew up, was not in Bellaghy town but a short distance away on a farm called The Wood. It is still a working farm and the home of Seamus’ brother Hugh. The farm and the adjacent bog land are featured in many of his poems, The Ash Plant, Bog Oak, The Other Side and in ‘Digging’ where he listens from an upstairs window as his father digs below.

He was born at Mossbawn Farm near the village of Castledawson in 1939. Local Historian historian Eugene Kielt showed us where the old thatched and whitewashed house was about 30 yards in from the road where the family suffered an early tragedy. Seamus’ younger brother Christopher, age three, was struck by a car and died. No one was really at fault, it just happened. It was recalled by Seamus in the poem ‘Mid-Term Break’

In the porch I met my father crying –
He had always taken funerals in his stride –
And Big Jim Evans saying it was a hard blow.
The baby cooed and laughed and rocked the pram
When I came in, and I was embarrassed
By old men standing up to shake my hand
And tell me they were ‘sorry for my trouble’
Whispers informed strangers that I was the eldest,
Away at school, as my mother held my hand
In hers and coughed out angry tearless sighs.
At ten o’clock the ambulance arrived
With the corpse, stanched and bandaged by the nurses.
Next morning I went up into the room. Snowdrops
And candles soothed the bedside I saw him
For the first time in six weeks. Paler now,
Wearing a poppy bruise on his left temple.
He lay in a four foot box, as in his cot.
No gaudy scars, the bumper knocked him clear.
A four foot box, a foot for every year.

Seamus Heaney is buried at St. Mary’s Church in a far corner of the cemetery beside an ivy topped stone wall under a sycamore tree and a hedge of snowberries. The Heaney/Scullion family graves are beside him, containing his baby brother Christopher, his mother, his father, his two aunts and his sister Anne. The parish priest, Fr Dolan, took us there. He felt Seamus should have a place of his own and felt that this spot was suitable and fitting. One visiting journalist asked if Seamus had faith. The priest’s answer was reflective and thoughtful and told of an essentially good man but I’m not convinced we got the answer. Maybe there is no answer but just the day before I had read and was touched by his poem ‘When all the others were away at Mass’. The poem recalls when he was at his mother’s deathbed and the priest, as he put it “went hammer and thongs at the prayers for the dying,” Seamus wanders back in thought, to peeling potatoes with his mother.

When all the others were away at Mass
I was all hers as we peeled potatoes.
They broke the silence, let fall one by one
Like solder weeping off the soldering iron:
Cold comforts set between us, things to share
Gleaming in a bucket of clean water.
And again let fall. Little pleasant splashes
From each other’s work would bring us to our senses.
So while the parish priest at her bedside
Went hammer and tongs at the prayers for the dying
And some were responding and some crying
I remembered her head bent towards my head,
Her breath in mine, our fluent dipping knives–
Never closer the whole rest of our lives.

The headstone is plain, has no religious iconography, just the words, ‘walk on air against your better judgement’, an epitaph from his poem ‘The Gravel Walks’ and recited by Seamus at his acceptance of the 1995 Nobel Prize for Literature. 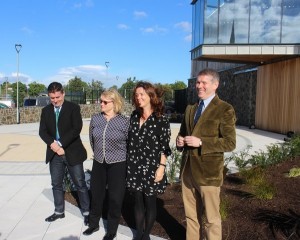 We drove from Dublin to Belfast, switched from the M1 to M2 and joined the M22 just north of Lough Neagh and near Moneynick continued on the A6 to Toomebridge along the Hillhead Road, turned onto the Deeppark Road to Bellaghy and the Seamus Heaney HomePlace, 45 Main Street, Bellaghy (www,seamusheaneyhome.com). That drive took almost two and a half hours.

I stayed at The  Ardtara Country House, secluded in 8 wooded acres near the village of Upperlands, the nearest town is Maghera.