These creatures were the bane of my childhood existence on my parents farm. Dodging the wicked turkey cock every time I went to fetch a bucket of water from the well at the far end of the haggard was an essential art as he was wont to fly at and peck and scratch anyone who was unfortunate enough to cross his path. My siblings and I were terrified of him but he never attacked my father hence he regularly escorted us on our way to the well if it coincided with his journeys to the hay and straw ricks as he was drawing fodder and bedding for the cows and cattle twice daily.

In Spring when the hens started to ‘lie’ an indication that they would soon start laying eggs, and needed the cock to thread them so as the eggs would be fertile, they would just flop down in front of me without warning, causing me to trip, fall and spill the water or worse still sometimes break the eggs that I had carefully collected from their nests in my apron for mam to store.

The worst indignity of all was when a hen not laid for two  weeks I was instructed to take her to another turkey cock usually at the other end of the parish in case ours was infertile. Usually two were taken at a time in a cardboard box on the back carrier of the bike. Imagine the remarks passed and questions asked by farmer’s sons who were usually laying /coppicing hedges along roads and lanes or yeaning ewes in the fields! Such excursions weren’t forgotten until the next dance attended when the first question asked when tripping the light fantastic was ‘did you have to use a saddle’ as opposed to ‘do you come here often’. Saddles had to be used when a wicked turkey cock trampled on and tore the back of a hen that he was about to thread.

The eggs were stored in tea chests half filled with bran until the hens were ready to cover a sitting.  This was announced when a hen refused to leave the nest after laying an egg. After 24 hours a clutch usually 12 or 13 eggs were carefully placed under her under cover of darkness and it took 1 month for them to hatch. After 9 or 10 days eggs were tested for fertility again in the dark using a flash lamp which was held underneath the egg, clear eggs were deemed to be infertile and taken away but it was exciting to see the clouded outline of a little turkey beginning to develop in the fertile eggs. My Mother always said come on now and we will say a prayer after the rosary that there will be no thunder or blasting in the nearby quarry until after they are hatched as the noise would kill the unhatched chicks. 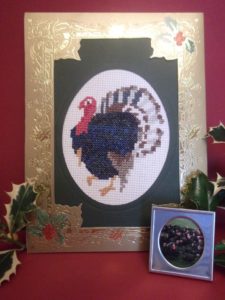 Once a clutch was hatched the following recipe was adhered to for the first 3 days of the new turkeys existence: Special Scrambled Eggs 1 quarter mug of milk, 1 knob of farmer’s butter, two eggs, 1 dessert spoon of chopped dandelion leaves and 1 dessertspoon of nettle leaves, this was cooked as any Scramble recipe but we didn’t bother with the toast! It tasted delicious and having cooked it three  times a day for three days I can assure you that I always enjoyed the first spoonful before allowing the wee turkeys to feed/peck it from my fingers, afterwards they moved onto mash/ration.

When they got old enough they decided to perch in the highest trees in the haggard and I got cruel hardship trying to get them down and into the turkey house before dark. The young cocks were never too impressed by this interference in their preferred roosting arrangements and some of them were starting to get wicked at this stage so the cycle began again. Luckily it was only for a few weeks as most of them were sold at the Christmas markets.

I have included a turkey cock motif worked in X stitch and mounted in a Christmas photo frame also a small photo of American bronze turkeys mounted in a silver Christmas cracker frame.