Dermot Gilleece on the life and extraordinary times of Eddie Jordan

Eddie Jordan lives in Monaco these days, which is something of a change from his early years in St Kevin’s Gardens, just off Dartry Road on the south side of Dublin. Though his sporting associations have to do mainly with Formula One motor racing as a team owner and later a television pundit, he also developed a keen interest in golf, which can be attributed to his father, Paddy, being a one-time captain of Bray Golf Club.

Indeed an idyllic childhood encompassed school holidays of morning golf followed by sailing afternoons with Bray Sailing Club ‘in those little dinghies.’ He retained this sense of adventure into an adult life which was both varied and fulfilling.

No challenge seemed too great for him. Like in the early 1970s, when in desperate attempts at getting a business career off the floor, he sold smoked salmon to French rugby fans from a stall at the top of Grafton Street. The man has always had style, which was especially evident in his dealings with a major golf champion.

I’m thinking of an extraordinary situation at Silverstone, where Gary Anderson, the chief designer for Jordan Grand Prix, was anxious to do some testing. So it was that the track manager, Brian Pallott, was phoned to make the necessary arrangements. ‘Can’t be done,’ said Pallott. ‘The track is taken up for a private day.”’

Intrigued by this, Jordan wanted to know who had booked it, but Pallott wasn’t saying. Typically persuasive, however, he persisted until the track manager eventually relented and revealed that Nick Faldo had taken it over to put a newly-purchased Porsche 959 through its paces. This, incidentally, was the same, ultra-exclusive car which Faldo’s American girlfriend, Brenna Cepelak, severely thumped with a nine iron after the pair split up in October 1998. (As she intended, the damage was extensive and quite costly to repair). 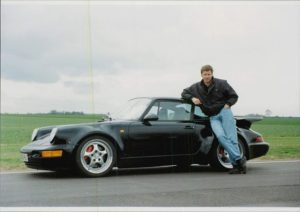 The upshot of Jordan’s persistence with Pallott was that a deal was done. If Faldo would allow the grand prix car on the track, he would receive the reward of a drive in it. And that’s what happened. Jordan recalled: ‘We had to take the seat out to allow for Faldo’s size and it meant there was room later for Anderson to have a spin and then for Chris Rea (the popular rock singer/guitarist] to drive it. The pay-off for me was an invitation to play a round with Nick at Sunningdale, a short while afterwards.’

He went on: ‘Now, I have had the good fortune of playing quite a bit of golf with guys like Nigel Mansell, Alain Prost and the useful Jacques Laffite, but to play a private round with the winner of all those major championships would be something else. Though I was aware that ideally, Nick liked to play with low-handicap amateurs, he seemed willing to indulge me off 12. Or so I thought.

‘Sure, he was pleasant and helpful with my game and I found it fascinating to note the care he took with every shot, as he mirrored the high levels of concentration I would associate with Formula One drivers. But when it came to talking, all he seemed interested in was cars, just like his fellow professionals, Nick Price, Greg Norman and Frank Nobilo had been. Still, I’ll always remember that round with Faldo, if only for the crazy circumstances which brought it about.’

Always keen to indulge his Irishness, Jordan thoroughly relished returning home for the 2006 Ryder Cup at The K Club. ‘I thought they did a wonderful job of staging it,’ he recalled. ‘In fact it’s hard to see it being surpassed as an Irish sporting spectacle. My only complaint was that Ian Woosnam [European team captain], Darren Clarke and the boys should have learned from Formula One drivers how to spray champagne more elegantly.’

He continued: ‘Great credit was due to the Irish Government for their investment and belief in the project, and to Michael Smurfit for giving us such a great venue. When I think of some of the conditions we faced in the difficult, early days of the Eddie Jordan Golf Classic at The K Club, the course looked absolutely amazing. Then there was the privilege I had of playing at various times with almost every member of the European team.

“You cannot come to Ireland and expect seven days of sunshine and the welcome made up for the weather. They reopened a couple of rooms in the Shelbourne Hotel for the Ryder Cup and I was fortunate in being one of those who stayed there to witness this great old institution reclaim its former glory. And Dublin on the Saturday night was wild, making Valderamma [1997] look decidedly muted by comparison.  I’ve seen some big shows in my time, and the 2006 Ryder Cup stood comparison with the biggest of them.’

Indeed it extended into a memorable fortnight for Jordan, given that on the week prior to the Ryder Cup, he had Tiger Woods and his former caddie, Steve Williams, as guests at his Wentworth home, located on a corner where the end of the garden looks out on the fourth, fifth and sixth holes of the famous West Course. 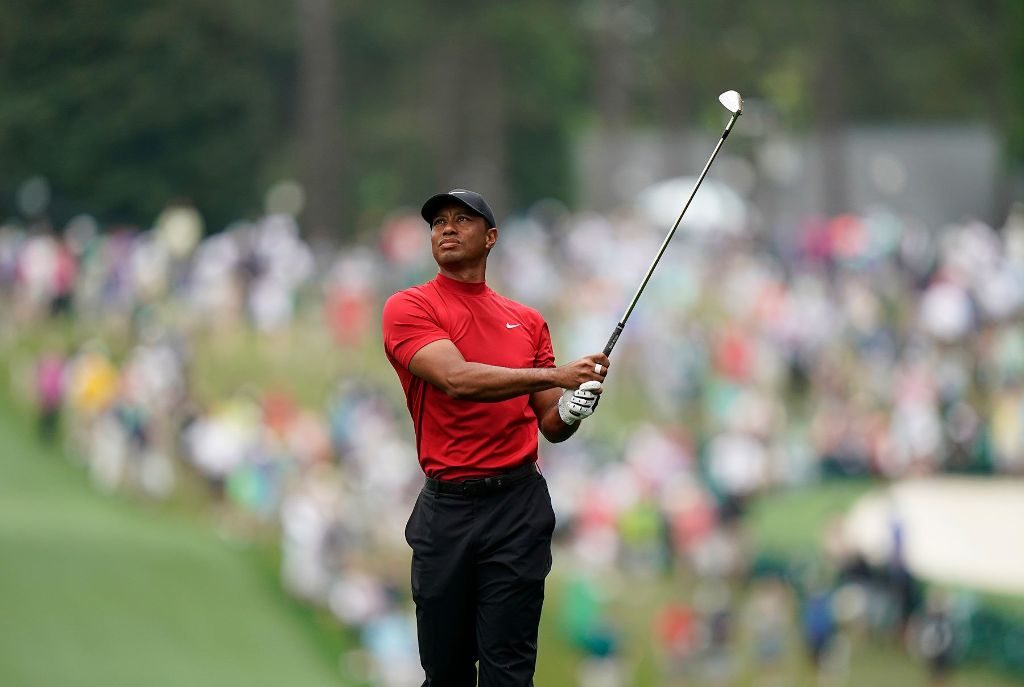 Tiger Woods hits from the first hole during the final round for the Masters golf tournament Sunday, April 14, 2019, in Augusta, Ga. (AP Photo/David J. Phillip)

‘Steve was a massive fan of Jordan Grand Prix and he told Tiger about us,’ he said. ‘The upshot was that I offered to put them up during the World Match-play Championship in Wentworth. The two of them along with a chef and other members of Tiger’s team stayed in the house while myself and Marie [Jordan’s wife] moved into the annexe.

‘In the evenings, Tiger used to go out my back garden and practise on hole five where he had quite an audience by the time he reached the green. Then he’d slip away into the trees, with people probably thinking he was going to the loo. Instead, he was heading for the back entrance to my house.

‘We thought he would leave when he was beaten in the first round of the championship on the Thursday, but he stayed in the house for a full week. Then came the really interesting bit. Though Tiger’s management company at the time, International Management Group, had offered to pay us £15,000 for the week, I later told them the price was double that. Then I requested that two cheques be written for £15,000 each, one made out to the Tiger Woods Foundation and the other to my charity CLIC [Cancel Leukaemia in Children]. When I told Tiger what I had done, he thought it was classic. A great move. He loved it. Then I explained that this was normal practice in motor racing.’

Like eager youngsters swapping stories, Jordan wondered if I still remembered Old Sotogrande all those years ago –1994, in fact — when himself, his wife Marie, J P Fitzgerald, who would later become Rory McIlroy’s caddie, and myself played the final hole in almost total darkness, having started the round in the late afternoon. It was an occasion we liked to remind each other of from time to time, as if to cement the sort of relationship he tends to maintain with contacts in the media, even now in his 71st year.

By way of response, I reminded him of 1998, when a quintessentially British institution was filled with the plaintive note of the uileann pipes, as he put his own, personal stamp on the launch of the Jordan Mugen-Honda 198, at London’s Royal Albert Hall. Meanwhile, the Theatre Royal in Drury Lane has a picture of another Jordan launch with Riverdance. ‘I always liked to give these occasions an Irish context,’ he observed.

After embarking in 1991 on involvement in the ridiculously-expensive world of grand prix racing, he would solemnly describe each upcoming season as ‘a make or break year in which I’ve got to deliver.’  Which didn’t always happen. Survival was the key.

These days, considerable wealth makes him a lot more comfortable, though bedroom slippers and Ovaltine are still a long way down the road for Ireland’s favourite motorman.

Tantrums on the tees..

How private jets built the fortunes of golf’s high flyers