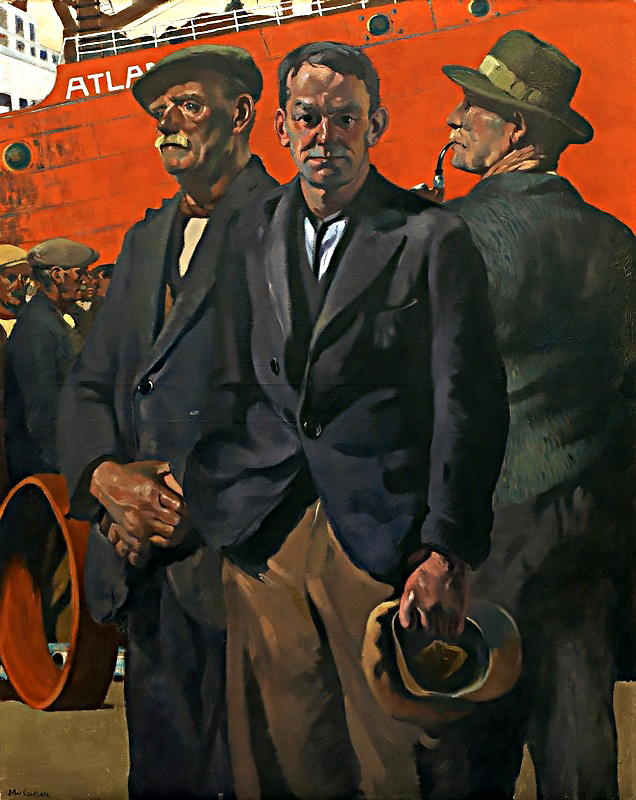 Dockers by Maurice MacGonigal at The Hugh Lane Gallery

The Hugh Lane Gallery in Parnell Square, along with most of Dublin’s galleries and museums, announced it was opening to the public again and promoted this on social media with a painting by Maurice MacGonigal. The painting titled Dockers shows three dock workers set dramatically against a red cargo ship.  MacGonigal, although Dublin born and schooled by the Christian Brothers in Synge Street, is perhaps more better known for his West of Ireland landscapes and considerably less known as one of my art tutors all those years ago at the National College of Art, which at that time was crammed into the basement under the National Library in Kildare Street next door to Leinster House.

Coinciding with this opening announcement, a provocative two-part TV programme on art by classicist and broadcaster Mary Beard was rerun on BBC4. The two events within days of each other reminded me of my more innocent years.

Maurice MacGonigal was a cousin of the renowned stain-glass artist Harry Clarke and he began his painting career as an apprentice at the stained glass studio then run by his uncle Joshua Clarkes at 6-7 North Frederick Street. Sadly the studios closed in 1973.

Maurice as my Professor of Painting, would stand looking over my shoulder and suggest improvements to my drawings by taking the pencil from my hand and drawing his version on the paper beside mine. He was a man of few words. ‘Put rhythm in your lines’ he’d bark and walk away. It took me some time to work out what that meant. I did eventually by closely studying the drawings of the old masters in the National Gallery in Merrion Square and it changed my understanding of art forever. Briefly, a line becomes rhythmic by different weights put on pencil when drawing – exactly as MacGonigal had shown beside my efforts.

There was to be another curt and abrupt intervention. After a few weeks pencil drawing ‘from the antique’- that was the practice of copying classical white plaster and marble casts of the human body using just pencil or charcoal on white paper. Half way through a class, again looking over my shoulder he told me to pack up and leave. ‘There is not much more we can do for you here, I’ll see you in Room 8’. I thought he had dismissed me. I arrived at Room 8, opened the door and mortifyingly dropped all my pencils to the floor, rolling around the feet of a circle of students at easels around a live and real live nude woman – a life drawing class was well under way.

The BBC programme I referred to above that brought it all back was Mary Beard’s Shock of the Nude.  An appropriate title for all those years ago as an innocent only child stooped, picking up pencils. I left the one that rolled beside the naked foot of the model. For me art history had come of age, from ancient Greeks to all those Venuses, Botticelli, Titian, et al., to very explicit drawings of Picasso or Egon Schiele. In the TV programme we saw Mary Beard in Cork’s Crawford Art Gallery bravely chiseling away at a fig leaf to discovers what lies beneath.. Which brings me back to the National College of Art in Dublin all those years ago – while the female models were nude, the males kept their trunks on.

Shortly after my departure from the college, and nothing to do with me, MacGonigal resigned as the Professor of Painting, following a revolt of students against what they called ‘the conservatism of the curriculum’ and which he considered would overturn ‘the professional authority of the college’. MacGonigal later would also vehemently oppose Charles Haughey’s tax-free offering to artists, arguing that it would fill Ireland with the ‘art parasites of Europe’.

An Bord Pleanála have granted planning permission for a €15 million visitor centre in the Dublin mountains at Massy’s Wood and the Hellfire Club on Montpelier Hill. But it seems the devil is in the detail, for it has fired-up the locals, well, the 170 that sent in submissions proffering: ‘deeply disappointed, shocked, preposterous, a vanity project.’

The South Dublin County Council’s project team say they will take the local issues raised into account. The centre will attract approximately 300,000 people a year, have 275 individual car parking and dedicated coach parking spaces. The Hellfire Club itself will undergo some conservation work.

The centre will have a cafe, shop, toilets, changing facilities, a walkers’ lounge, exhibition area and an education centre including a 50 seat auditorium. I imagine the underside of all tables will have unrestricted views…so any cloven hoof will be noticed immediately.

Two Casinos and a Castle 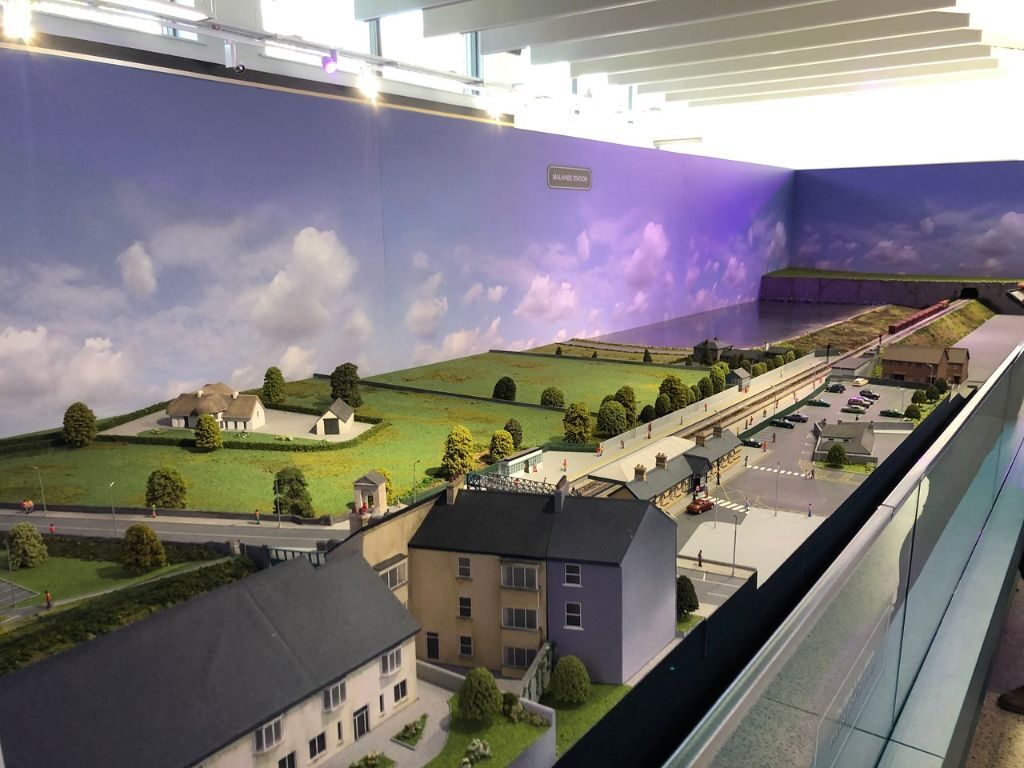 There are lots of casinos in Dublin but only two where you can’t loose your shirt or win enough to afford a Charvet replacement – recall the 1991 Moriarty Tribunal revelation that Taoiseach Charlie Haughey spent nearly £16,000 on those bespoke shirts. But I digress, these two casinos derive from the old Italian word ‘casa’ meaning ‘little house’ and have nothing to do with gambling.

The Casino at Marino, just three miles north of the city centre, was a folly but a beautiful one and one of the finest example of eighteenth-century neo-classical architecture anywhere in Europe. Currently it is closed to the public due to ongoing major restorations by the OPW Office of Public Works. At night it is magnificently illuminated.

Travel past and head to the second, the thatched roofed Casino Malahide beside the railway station. Newly opened it contains one of Europe’s most extensive model railway collections. Recently renovated this large thatched house was once the hunting/shooting lodge for the Talbot family of Malahide Castle.

The castle and the casino are managed and operated by Shannon Heritage. As the name might suggest they operate many projects in the west, Bunratty Castle, Dunguaire Castle, King John’s Castle, Craggaunowen Castle and Knappogue Castle but increasingly as many projects in Dublin, GPO Witness History in O’Connell Street; Newbridge House and Farm in North County Dublin. Now they have added Casino Malahide to Malahide Castle and Gardens. And they have come up with a hard to beat family excursion which includes a tour of the castle followed by a short walk to visit to extensive model railway collection at Casino Railway Museum.

The collection began in the Churchtown home of Cyril Fry, a railway engineer/draughtsman at the Inchicore Railway Works. The work was continued by Thomas Tighe another retired CIÉ craftsman

Malahide Castle was built on lands once ruled by the Norse-Irish – Dublin Vikings until the Anglo-Norman invasion of Ireland. Sir Richard Talbot of Shrewsbury in England was one of Henry II’s knights during the invasion of Ireland. For his loyal efforts Sir Richard was rewarded by King Richard II with the ‘lands and harbour of Malahide.’ The castle, originally built as a fortress became home to the Talbot family from 1185 until 1976. They lost possession for a short time after the Cromwellian conquests when Oliver Cromwell gave it to Miles Corbet, Chief Baron presiding over the Court of Exchequer- one of the Dublin Four Courts. Following the demise of Cromwell, the Talbot family were restored to the estate. Corbet went on the run, was eventually captured and hanged at Tyburn in London.

During over 700 years in the castle the Talbots had their ups and downs. They backed the losing side of King James II in 1690 and fourteen members of the family died in the Battle of the Boyne.

Peter Talbot, while a Jesuit priest in Portugal became close to England’s King Charles II as the king was preparing to marry Princess Catherine of Portugal. Factions in the royal court were never happy about his influence with the king and forced his retirement. Back in Ireland he was appointed Archbishop of Dublin in 1669. Protestants in Ireland, alarmed by Talbot’s closeness to Charles II and the prospect that the balance of power in Ireland might shift to the Catholic majority, protested vigorously resulting in even more oppressive laws against Catholics. Talbot again was forced into exile in Paris. He returned some years later, an old and ailing man, was arrested and charged with complicity in the Popish Plot. He was imprisoned in Dublin Castle where ironically, his former rival Archbishop Oliver Plunkett was a fellow prisoner in the cell next door. Talbot died there and is believed to be buried in the churchyard of St. Audoen’s Church. 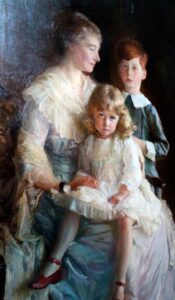 Talbot family painting in Malahide Castle – Mum with the last Lord Talbot of Malahide – Milo – the red haired boy – spy? and sister Rose who burned his papers when he died

The Talbots later converted to Protestantism, perhaps out of conviction, perhaps to hold on to their castle and lands. Interestingly the Talbots always claimed that there was a ‘Priest hole’ in the Castle behind secret doors in the Oak Room that led into a cupboard with a false floor which probably gave access to a safe escape tunnel.

The last Lord Talbot of Malahide was Milo, listed as a British diplomat. But there were always rumours surrounding him. In Cambridge in the 1930s he was tutored by Guy Burgess and Anthony Blunt. Both of them later revealed to be Soviet spies. He was never charged but his friendship with them led to his early retirement in 1956. His sister Rose inherited the estate but not the titles. And she added to the fuels to the spy whispers when following his death in 1973, she was seen burning his papers.

Malahide Castle and Gardens: open daily 9:30am to 5:30pm www.malahidecastleandgardens.ie/