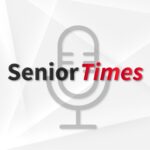 Gary Cooke meets Irish rugby legend, broadcaster and author Tony Ward the Irish former rugby union and football player during the 1970s and 1980s. He played rugby as a fly-half for, among others, Munster, Leinster, Ireland, the British and Irish Lions and the Barbarians. Ward was selected 1979 European rugby player of the year

Mairead Robinson talks to the author of ‘The Secrets of Ageless Ageing’, Karen Ward