In the latest in her series of literary excursions in these islands, Lorna Hogg pinpoints the locations for the inspiration of the modern children’s classic Watership Down by Douglas Adams

If you like children’s stories with elements of allegory and fantasy, from such authors as C.S. Lewis and Tolkein  – you’ll enjoy stories from Richard Adams as much as your grandchilden will. Created by a loving father, to keep his children amused during car journies, the book has gone on to entertain succeeding international generations.

Richard Adams’ life was largely lived in one beautiful rural area of England – the Hampshire Downs. He was born a doctor’s son, on 9th May 1920, in Wash Common, near Newbury, and grew up  in the village, near to Whitchurch, in Hampshire. He enjoyed the beauty of the Downs, or hills,  in all seasons. He was familiar with their ancient forests, with kites and kestrels flying overhead,  the wildflower meadows, and trails, the gallops for racehorse training  – and of course, the rabbits.

After school, Adams went to Worcester College in Oxford to read modern history. However, he was called up in 1940, and joined the Royal Army Service Corp. He served with the Airborne Company in Palestine, Europe and the Far East. Those who served with him stayed in his mind, and later inspired some scenes and characters in Watership Down, including Bigwig. On leaving the army in 1946, Adams returned to college and then settled down to a quiet life in Whitchurch. He married Elizabeth, daughter of an RAF Squadron-Leader, and worked as a senior civil servant in  the Ministry of Housing and Local Government, but doing some writing in his spare time.

The family was joined by daughters Juliet and Rosamond. It is now the stuff of legend that Adams made up a series of fantasy animal tales to keep them amused on car journeys   – and it was his daughters who insisted that he write them down. They also overruled the original death of rabbit Bigwig. The stories, which became Watership Down, were set in the surrounding area, telling of the struggles and challenges of a band of rabbits, who had human virtues such as courage and loyalty.

It tells of circumstances all too familiar to-day – a peaceful rabbit warren is under threat from a housing development, and the story is the struggle of the rabbits to to find a new home. They come across human dangers, such as poisoned fields, but also aggressive rabbits. The struggle is intense, but eventually, the rabbits find a new home. It has been suggested that the story is an allegory, of man’s indifference to nature. It has also been compared to Greek mythology, and some reviewers have seen religious symbolism. One of its strengths is Adams’ skill with anthromorphology. He gives the animals some human abilities – they can speak and rationalise, but retain their natural charceristics, and his lack of sentimentality about them sets the book apart.

Encouraged by his daughters, he sent the story to a publisher, and survived the first of seven rejections. Adams proved to be an example of what he taught his grandchildren – to persevere. Eventually, Rex Collings accepted it, and Watership Dow’ was published in 1972. It proved an immediate success, and went from strength to strength to sell over a million copies worldwide. Adams also received two of the the top prizes for  childrens’ fiction – The Carnegie Medal, and the Guardian’s Children’s Fiction Prize.

In 1974 his second novel appeared, again centred around animals, in an imaginary world. Shardik has a hero, a bear god, living in an imaginary background, who helps the enslaved inhabitants retrieve their old empire. After Shardik, Adams was able to retire from the civil service, and become a full time writer. The Plague Dogs  draws attention to the shadowy world of animal research, in a hard hitting tale. A thoroughbred terrier and  a mongrel escape from a government research centre, and the story covers their adventures when they escape. Part of Adams’ success lies in his ability to present  animals as reasonable and caring creatures, rather thn sentimentalised furry stereotypes. He steered away from sentimentality, and was prepared to deal with death.

Adams had spells as writer–in-residence at the University of Florida, and also at Hollins University, Virginia. In 2015 received an Honorary Doctorate from the University of Winchester. He continued his interest in nature with such works as A Nature Diary, and severa animal books written for children. The lure of Watership Down proved irrestible however. In 1996, Adams took up the tale again, with a collection of short stories – Tales from Watership Down. 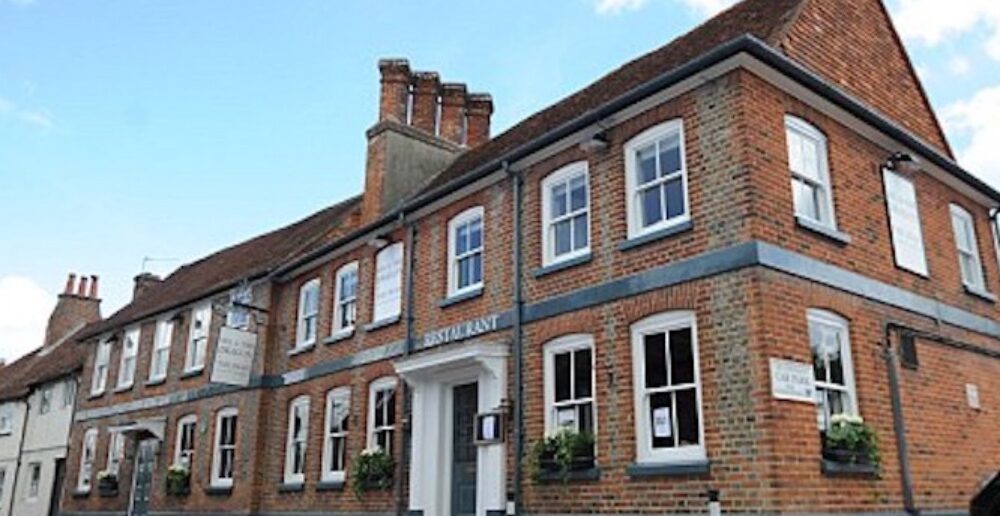 The Bell and Dragon at Kingsclere

The original book has been filmed in various formats, and a well received TV version screened on Christmas Eve 2018. Sadly, Adams was not alive to see it. He celebrated his 90th  birthday with his family in 2010, with a family party at the atmospheric White Hart Inn in Whitchurch, and died on Christmas Eve 2016.

Watership Down is set on the beautiful downland which stretches from Hampshire through Berkshire, and tough planning laws have preserved its serenity and peace. Views stretch for miles – Highclere Castle is visible, and racing gallops dissect meadows of wildflowers. Ancient forests splash the countryside with glorious colour, yellowhammers, chaffinches, larks and kites fly overhead, roe deer and hares run – and, of course, rabbits live on Watership Down.

One of the attraction of these Downs is that they are peaceful and undeveloped. There are no tourist buses, crowds, or tour groups. The great challenge for the interested is – that they are largely peaceful and undeveloped, with no tourist buses, crowds or tours! However, with planning, it is quite possible for the book’s many fans to enjoy the area.

There is a regular train service from Reading passing through Overton and Whitchurch. Both villages have excellent pubs and accomodation. With good local access to walks, you can then spend anything from an hour and a half  up to several hours exploring. However, if you are car-less, the ideal is to hire a local taxi. You can discuss your route and time scale, be taken to a specfic spot, left to explore with a map, and then collected. Don’t overlook the area’s other attractions –  Bombay Sapphire, famed for its gin, is at hand, and Highclere Castle is within easy reach. 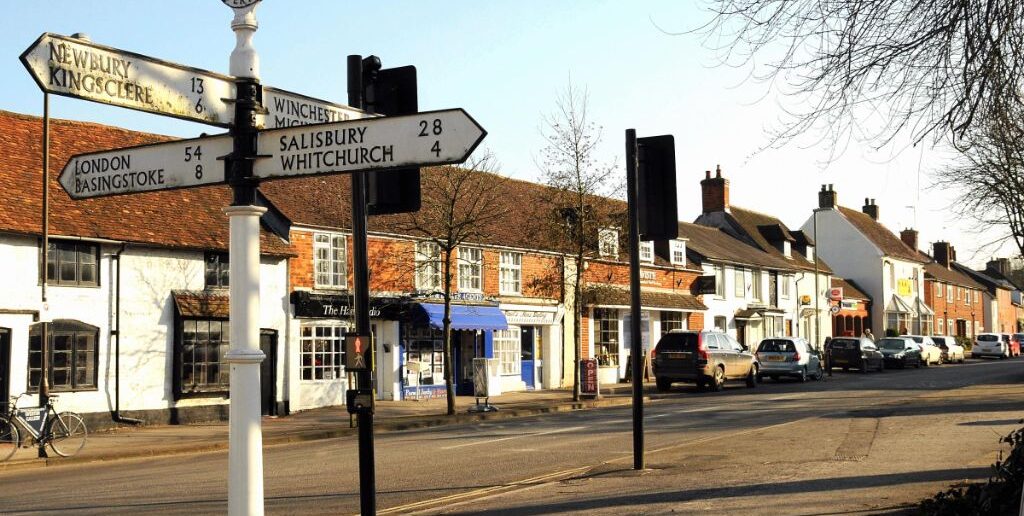 The village of Kingsclere (eat/stay in the excellent Bel & The Dragon) is another good spot. It has access to Fox’s Lane and trails, allowing you to take in Ladle Hill. You can cross the gallops, head to the Hill Fort, with its spectacular views, or explore some of the magnificent forests. The book’s Nuthanger Farm is a private residence and not open to visitors – but can be glimpsed from the road. The village of Ecchinswell is also another good starting point.

One of the best websites to check is that of the BBC’s Countryfile programme.

On top of the world