Lorna Hogg examines our fascination with steam engines which is no longer the preserve of schoolboys and ‘anoraks’..

Our love of trains has never gone away, and they’re increasingly popular as they become faster, sleeker and smoother. We still love steam trains, however, as witnessed by the tens of thousands of people who turned out to see The Flying Scotsman’s return to the tracks. These days, rail museums are popular attractions and increasing numbers enjoy steam train rides, and volunteer or fund-raise to restore old engines. If any more inspiration is needed  –  we have some world class engines and rail museums close at hand..

In the English Midlands, Derby’s Roundhouse was built in 1839 as a repair shed for steam locos. It was at the centre of  Derby’s  extensive railway works, spanning the 1830s to 1960s, in the city where three railway companies united to create Midland Railways in 1844. The Roundhouse, the oldest surviving turning shed in the world, allowed sixteen locos to be repaired and fitted with new parts, thanks to a central turntable allowing them to be moved in and out of the building individually.

Some 4,500 people once worked on the original 20 acres of the Railway Works, where thousands of locos and carriages were built. The 1960s saw major changes, however, and by the 1980s the Loco Works buildings were empty and derelict. Derby College has developed the site, restoring The Roundhouse, which is now a public space.

However, many of the  of the old railway buildings remain, including the Tri – Junction Railway Station, where you could even buy tickets for travelling dogs!  Visit the comfortable Midland Hotel, built for First Class passengers. It was said that conversation here centred on hunting and shooting, whilst in the nearby pubs, it was about shunting and hooting!  Wander around the area’s old pubs, administrative buildings and the railway village. It remains a popular residential  area, retaining front doors  painted in claret red, the colours of the old Midland Railway.

You can take a guided  45 minute tour around the Roundhouse, and old engine shed,  ending with a cuppa, for £6. Group tours are also welcomed –  tourism@derby.gov.uk. Check www.visitderby.co.uk for booking details and available dates, or book online. Tel.  0044 (0) 1332 643411 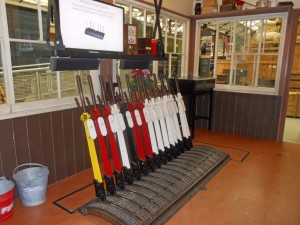 Work the signals at STEAM…

STEAM, based in the old railway yards of Great Western Railways in Swindon, Wiltshire, has so much to see that least three  hours visiting time is recommended – and you’ll probably need more! Unsurprising, as the history of  Great Western Railway life is reflected, and you can experience it through displays and audiovisuals, which include input from ex- rail workers, and some hands-on experiences.

Walk down from the modern Swindon station, past the old railway village, where many workers lived. Follow in their footsteps under the tunnel, into the yards,where up to 12,000 people once worked. Reconstructions, with figures based on real site workers, plus original equipment give an idea of the complexity of the work involved. Life in the works, from welding, assembly, painting, fit out and administration is all here, with some 400,000 artefacts, plus regular friendly ex-worker volunteers to answer questions. Discover women’s war work here, how  DIRT money got its name, why workers often became deaf and how all equipment, from pen nibs and string net luggage racks to rail sleepers was made here.

You can ‘drive’ on the cab of a train simulator, and practice changing signals (which are heavy!) and points. Descend into the inspection pit, and walk under the engine Caerphilly Castle,  before trying out one of Queen Victoria’s sumptuous royal saloons –  and a 1930s buffet car.

If you suspect that one of your ancestors worked here, visit the Wall of Names, or check the extensive research resources – before visiting the excellent onsite cafe, and shop.

A Day Ticket costs £8.50,  £6.80 for seniors.  Don’t forget that the Swindon Designer Discount Village is also based in the old railway yards, next door to STEAM. 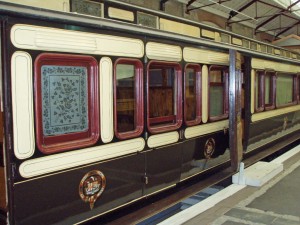 The National Railway Museum at York has 300 years of railway  history, and 1,000,000 rail related objects – and that’s just for starters. This is  home to some of  the world’s most famous engines. The 1938 steam engine speed (125mph) world record breaker ` Mallard’ is here, along with the iconic  `Shinkansen’, the 1974 Japanese Bullet Train. Art Deco designed classic, the opulent `Duchess of Hamilton’ and an early Eurostar are all on hand. There are knowledgeable and friendly guides, plus talks, displays and exhibitions to enjoy. This is also the normal base of  The Flying Scotsman’, which is now  back at part-time work on steam trips. Get details of appearances and trips on www. flyingscotsman.org.uk

York’s old railway engineering sheds are filled with carriages, platforms, history and artefacts ranging through signage and nameplates, signalling, knobs, knockers and uniforms, all detailing life on the railways. You won’t go hungry here, with choices including The Dining Car Restaurant, (set in a carriage), and the Mallard Cafe – plus knowledgeable and friendly guides throughout.

Access to railway carriages is a major attraction, and  the world’s finest collection of royal carriages in open for exploration. Sample Queen Victoria’s `Palace on Wheels’,  King  Edward VII’s smoking saloon, and a 1941 Royal Carriage. Try First, Second and Third Class carriages. ‘Travel’ in the Bullet Train, see a replica of Stephenson’s Rocket, and stand alongside the massive Chinese engine, at 15 ft.  the largest single unit loco in the museum. Equally impressive is the shop, with a wide choice of  books, illustrations – and Hornby trainsets. Admission is free

We’ve all heard of Stephenson’s ‘Rocket.’  Fewer people, however, may be aware that his next design:  ‘Planet’ was created in 1830, to run on the new Liverpool to Manchester Railway, and it covered 50 kms in one hour. Now you can ride for a short distance on a replica Planet, on that original railway, part of which runs through the Museum of Science and Industry, Manchester. It is the home of this version of  Planet, which recently had a television moment. The engine featured in the TV series Victoria,  the Queen and Prince Albert. Entry to the museum is free

There is also plenty for ‘steam heads’ on this island. Board the very modern Bangor train from  Belfast to Cultra, to the Ulster Museum of Transport. This a  first class museum, housing the Irish Railway Collection.  There is a  carriage from Ireland’s first railway, running between Dublin and Kingstown in 1834. However, the star of the collection is indubtedly Maedb, the fastest  and most powerful train built in Ireland, at Inchicore.  Just as interesting are the carriages and engines used on narrow gauge and industrial railways, plus the intriguing transport that moved our great grandparents.  Plenty of memorabilia is on display here, from nameplates, to interactive displays. As they say here, visiting museums is hungry work, and the Ballycultra and Midland Tearooms can help with hearty, homemade food.

The  Railway Preservation Society of Ireland holds regular steam excursions as well as diesel trips – but enquire early, as they fill up quickly.

Flying Scotsman fans should go to www. flyingscotsman.org.uk for details of her touring season.

Steam Dreams, at www.Cathedrals Express, offer a wide range of day trips on the Flying Scotsman – but these sell out quickly.