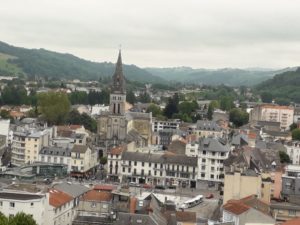 Everybody, it seems, has been to Lourdes, but most pilgrims leave without experiencing a number of its many non-religious attractions and those of the surrounding Pyrenees.  Buried beneath the countless shops offering religious mementoes – some tasteful, many tacky – and all the associated paraphernalia it is a pleasant town and hinterland  waiting to get out. Millions visit the town every year and there are more hotel rooms in Lourdes than anywhere else in France after Paris. Yet it has a local population of less than 15,000.

Most visitors make for The Grotto, The Basilicas, The Sanctuary, and take part in the candlelight processions and the interminable masses in different languages. But the castle overlooking the town, for example, was not exactly jam-packed with visitors on the day I visited. Which is a pity because it has a lot to offer: it features The Museum of Pyrenean Life with rooms kitted out as they would have been centuries ago, as well as examples of peasant dress from all over the region; and there is a very impressive model village. The site goes back to Roman times, and Charlemagne tried to take it in the 8th century. The keep dates from the 14th century, and some walls from the 11th or 12th century. Near the keep is a lovely botanical garden.

There are many other diversions, including the funicular to the Pic du Jer which offers an even better view of the town and is easily recognised by its large cross which is illuminated at night. It is approximately 1000 metres above the town.  At the summit a footpath leads to a viewing platform offering stunning views of Lourdes, neighbouring Tarbes, Pau and the Pyrenean peaks.

Near to the town is a Lake Lourdes offering many activities – pedalos, kayaks, bike trails, golfing, and fishing as well as walking tracks. Nor surprisingly Lourdes is not short of restaurants and other eateries offering fayre to suit all tastes. I found a superb, reasonably priced restaurant in Les 100 Culottes near the market. It specialises in seafood and pork dishes and is well worth a visit. (25 Place du Champ Commun 65100, Lourdes. Tel: 0033 507 455356. Closed Sunday). 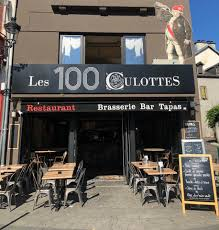 If you visit Lourdes as one of the many packages available from a number of travel companies you will not have to look for a hotel. But if you organise your own accommodation it’s good to know the town is packed with choices.. from basic B&Bs to the immensely grand. I opted for something midway, the four star Grand Hotel Gallia & Londres. This is a centrally located, old world, family run hotel exuding comfort and fine service. It has an elegant, beautifully panelled dining room that offers a splendid backdrop to its gourmet offerings. An historic note: the hotel was established by a member of the Soubirous family to which Bernadette belonged. Not cheap but recommended if you don’t mind paying extra for comfort and service for your few days in Lourdes. (26 Avenue Bernadette Soubirous, 65100, Lourdes. Tel; 0033 562943544)

Bernadette and the apparitions 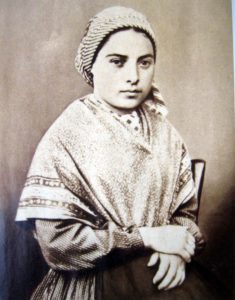 On the 11th of February 1858, 14-year-old Bernadette Soubirous, a miller’s daughter from Lourdes, is said to have witnessed an apparition of Mary the Mother of Jesus while gathering wood. Bernadette said she first saw a vision of Our Lady surrounded by brilliant light. During the 9th apparition, the discovery of the ‘miraculous spring’ in the Grotto was made by Bernadette. Its waters are said to have healing powers and many miraculous healings to this day are attributed to it.
Bernadette was Canonised in 1933.

Excursions to the neighbouring Pyrenees
There are a number of interesting towns in the Pyrenees to visit from Lourdes and you cannot fail to be impressed as you pass through a string of spic-and-span centres, characterised by steeply-roofed timber dwellings. One the most interesting is Cauterets which is only 30km due south. If you are not driving you can get a train or bus.

Cauterets is a small, but charming town, popular both in the winter as a ski resort and in the summer for tourists exploring the many attractions of the region. At one point Cauterets was the premier spa town in France frequented by the rich and famous. Visitors included Victor Hugo, Claude Debussy and Beaudelaire. The elegant Boulevard Latapie Flurin with its Belle Epoque splendour is worth checking out. Another interesting architectural gem is the bus station located at the entrance to the town. This looks like a giant mountain chalet and was the Norwegian pavilion at the Paris Exhibition in 1889.
The town is well served by eateries. One I can recommend is Regent just off the main town square. (5 Place Marechal Foche 65110. Tel; 0033 562925010).
Another popular excursion from Lourdes is Gavarne. You walk through the village and at the end the view will knock your socks off: this is the Cirque de Gavarnie, a natural amphitheatre which has been attracting visitors since the 19th century. The ‘colosseum’ is 5km in diameter with its ‘walls’ reaching up to 1500m high, containing some of the highest waterfalls in Europe. Numerous surrounding summits are all over 3,000m high. It comes as no surprise that this is a UNESCO World Heritage site. The aforementioned Victor Hugo described it thus: ‘The most mysterious building by the most mysterious architect. It is the colosseum of nature’. There are numerous walking and biking trails through the forests skirting the foothills of the mountains. And if you’re feeling energetic or adventurous you can follow some of the slightly more demanding ‘off road’ trails – the reward is likely to be some of the most breath-taking views of your life. Hiking fans can continue up to the foot of the Grande Cascade, one of the highest waterfalls in Europe.
So the suggestion is if you are planning to visit Lourdes in the future, either in a package deal, or under your own steam, ensure you make time to visit some of the surrounding Pyrenean towns and villages such as Cauterets and Gavarne.