In the emerging scene that was the showband era in Ireland back in the day Joe wasn’t just a vital cog in it all but was also perhaps its biggest attraction. Yes, Brendan Bowyer and the Royal Showband were huge and ‘The Hucklebuck’ remains an evergreen classic; but Joe had lasting success and popularity and to this day remains much loved and fondly remembered. Indeed, that expression; “There’s no show like a Joe show” really does sum it up and, having seen him perform many times back in the golden days of the showband scene, I can vouch for that fact. Indeed, if you were going out at the weekend and were hoping to be where the best looking women were going to be then you checked to see if Joe and the Drifters were playing anywhere in your locality in the West of Ireland and you made that your go-to venue on the basis that you might be in with a chance (wishful thinking, most of the time!).

Joseph Francis Dolan had a bit of a rocky start to life. His father passed away when he was just ten years of age and while still in his teens he was orphaned when his mother also died. Indeed, it was she who encouraged his interest in music and got him to take up the piano.

However, it was his distinctive voice that was his calling card. It was a high range, known as a ‘melisma’ technique that was instantly recognizable but out of the reach of most singers (although Demis Roussos had a similar reach). From the very outset Joe was destined to be different on the Irish scene.

Despite his burgeoning musical talents, Joe began his career in the less glamorous life of a compositor for the Westmeath Examiner (a compositor was a person who set out in metal the pages from which the newspaper would be printed off; I know this because I worked in the Tuam Herald newspaper in Galway for six years!).

However, it didn’t take too long for Joe and his brother, Ben, to feel the draw of the music scene and by the early Sixties they were a fully fledged musical combination called Joe Dolan and the Drifters. Their first single was called ‘The Answer to Everything’ and was an instant success, reaching number 4 in the Irish charts. 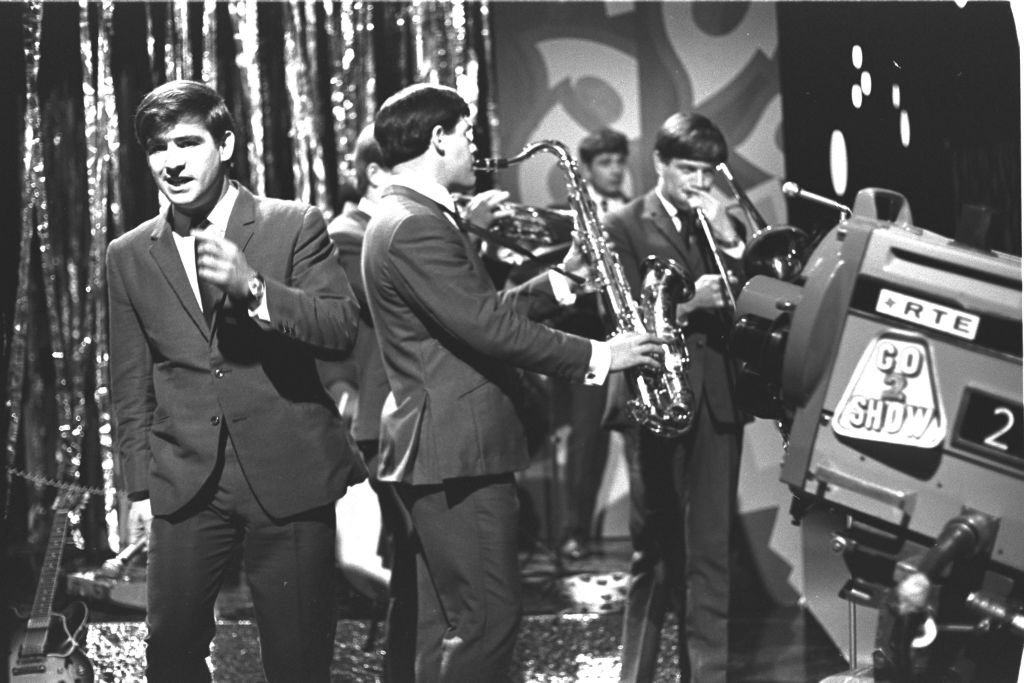 Part of Joe’s band at that time was a young lad called Tommy Swarbrigg who, with his brother Jimmy, went on to also have big success. Tommy was trumpet player in the Drifters and, as he described it to me, “It was a dream come through to be part of all that. Joe just wasn’t big in Ireland but he was big outside of Ireland as well. It was unbelievable and we had a ball”. In fact, long before Brendan Bowyer and the Royal Showband established a very successful residency in Las Vegas Joe was given that opportunity but decided to turn it down. I’m sure that was a big decision at the time but, as it turned out, there was bigger success around the corner.

He was constantly on the radio in the late Sixties with records like ‘Tar and Cement’ and ‘Love of the Common People’ but it was in 1969 when he hit the jackpot. His recording of the Albert Hammond song, ‘Make Me an Island’ not only stormed the charts around Europe but also made it to number 3 in Britain (kept off the top spot by Stevie Wonder and Cilla Black). Another Albert Hammond song ‘You’re Such a Good Looking Woman’ also made it into the British Top Twenty the following year. Around that time Joe was approached by and signed to the MAM Agency (whose major star was Tom Jones) and by chance Joe’s next successful collaboration was borne out of that. A young Italian songwriter called Roberto Danova was in the MAM offices in London pitching some of his compositions when he got talking to Joe’s manager, Seamus Casey, who was there also and Danova offered some of his songs to the Irishman. As Roberto told me recently; “I knew Joe’s voice from hearing it on Radio Luxemburg but I thought he was an American blues singer. I couldn’t believe it when I heard he was from Mullingar in Ireland! So, I used to record the backing tracks in London and then Joe would come over and lay down the vocal tracks and that turned out to be a very successful process”. 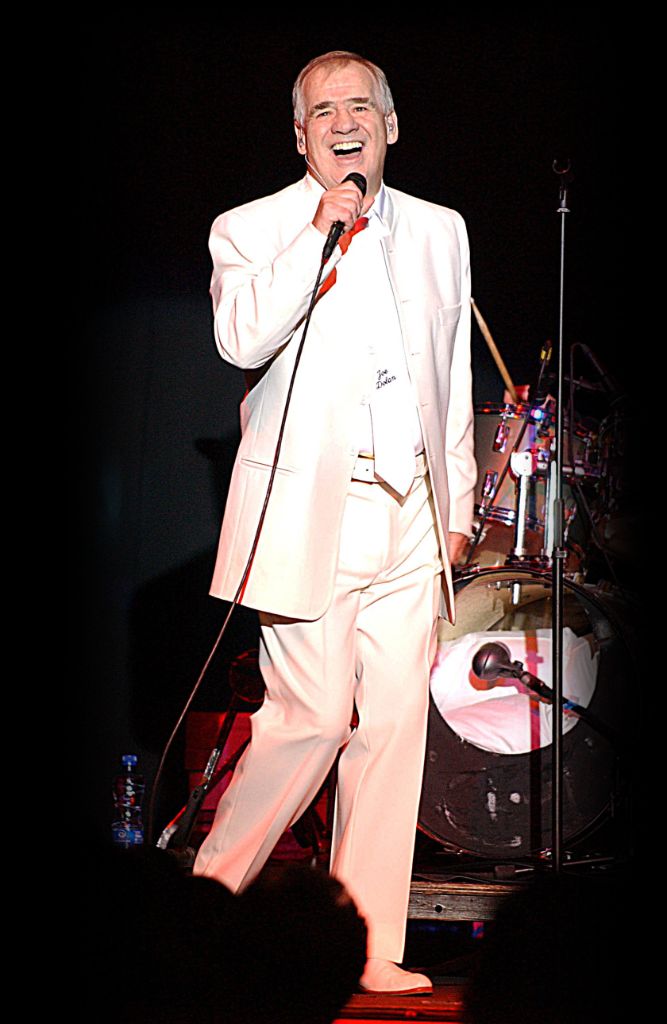 Their first collaboration turned out to be ‘Sweet Little Rock ‘n’ Roller’ which also subsequently became a hit for Showaddywaddy. However, Joe’s biggest hit with Roberto Danova was in 1975 with a song called ‘Lady in Blue’ which was a million seller and was also a number one hit in places like Canada and South Africa. Joe followed that with more international success with songs like ‘More and More’ (Danova again) and ‘It’s You It’s You It’s You’.

Ironically, Joe’s last big hit was a pairing with Dustin the Turkey in 1997 and a reworking of his earlier hit ‘Good Looking Woman’. Happily I don’t remember it but it did have one important landmark in that it insured that Joe was unique amongst Irish artists in having a number one hit across four separate decades, from the ‘60s, ‘70s, ‘80s and finally the 1990s. Not a bad strike rate.

I got to know Joe back in the day and, in fact, had one minor run-in with him back in the 1970s which, in retrospect, was amusing. Back in the day I used to promote music concerts in the West and annually we had an awards festival in which we would assemble the cream of the Irish music industry. That was actually easy to do at the time because many of them wanted to showcase their talents to a new audience and also because it gave entertainers a rare opportunity to catch up and get to meet each other socially, something that was rarely possible on the touring scene at the time. The awards concerts were run in conjunction with the Tuam Herald in which we (the ‘we’ being myself and Tom Gilmore) would get readers to vote for their favourite singers, bands, records etc.

Anyway, one year,I think it was 1978, Joe was voted best vocalist, except we had a slight problem. Joe wasn’t available to show up on the night so, guess what, we had a slot but no star man. My solution was that we give the award to someone else (I won’t say) who was willing to show up in Tuam. Happy days. However, a few days later I got a phone call from Mullingar requesting that the award be sent on. I explained, bluntly, that somebody else was now the recipient and that no award was available. Anyway, a short while afterwards a couple of friends of mine were in the Dolans’ pub in Mullingar and mentioned that they knew me. Joe was there. Apparently, at the time they had one of those stags’ head launched on a plinth in the bar and Joe pronounced that he had every intention of replacing the stags’ head with mine whenever he got his hands on me. Fortunately he never followed up on that threat and the next time I met him his irritation had dissolved and we had a good chat.

I suppose it’s the mark of any great artist that you are respected and admired by your peers. Damon Albarn of Blur was a fan and at the 2009 Oxegen Festival he dedicated ‘ The Universal’ to him, Joe having recorded the song himself. Robbie Williams was another admirer; indeed, Robbie’s father, also Joe, used to open as a support act for the Drifters when they played in Manchester and the young Williams met him as a child.

Joe had many firsts to his name, including being one of the first Western acts to play in Soviet Russia in 1978. However, his most peculiar claim must have been to have had the first hip bone replacement sold on eBay back in 2004! He had a hip replacement back in the day and was persuaded on the Podge and Rodge show to put his old hip up for sale for charity. It sold to a lady down in Cork and he duly signed it: “Mind my hip”. 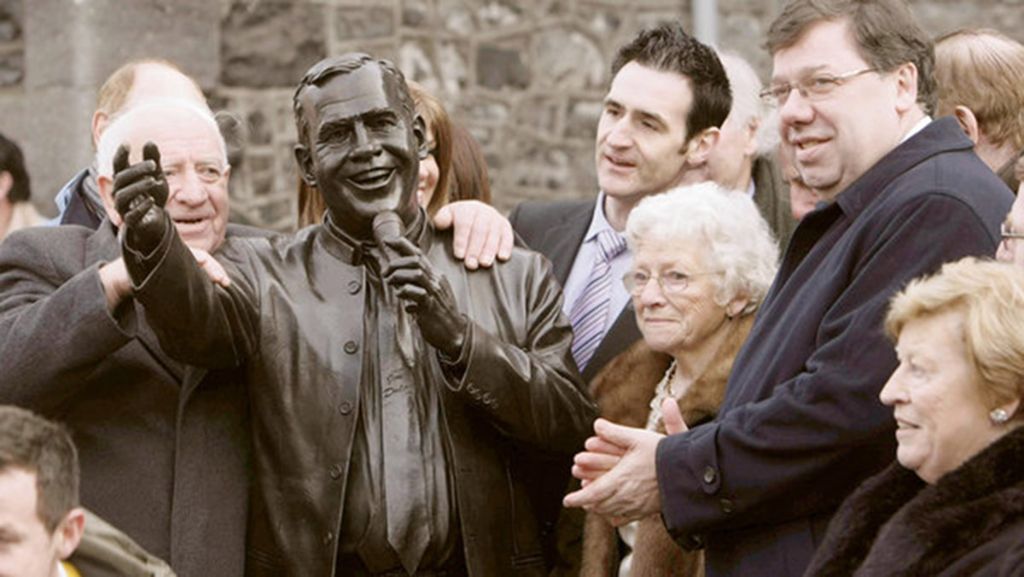 The Joe Dolan statue is situated at the Market Square Mullingar

Unfortunately, he died in 2007. In fact, he got ill just down the road from me in Foxrock in Co. Dublin where he lived with his partner, Isabella.

The trouble with angels

Looking for an Affordable Homecare Solution?