My mother and other ICA members including Mrs Farrell, Mrs Kennedy and Mrs Foley from selected guilds of Carlow Federation  were invited to attend a Summer school in Garryvoe during nice weather in 1946. According to her diary Mam attended an ICA Council meeting on Saturday June 1st 1946 (she often spoke about it) but I am unable to recall the venue at present, anyway I can furnish a photo copy of her condensed hand-written report. Although it’s not mentioned she always told me that there was great excitement when it was announced that one of the national ICA guild organisers Phyllis O’Connell from Tipperary ‘was on four wheels at last’ due to an ‘anonymous’ gift. arrangements for the Summer school were made also. Those wishing to participate would get to and from there on their own steam, those who could teach a craft/s did so, were permitted to learn a new craft if desired and every member in attendance went on a rota (drawn up by the organisers) to do cooking, baking and housekeeping duties for the duration of the Summer school. Apparently everything went to plan and Mam and her companions enjoyed meeting so many new friends and the discussions provided very interesting fodder for many a guild meeting that followed. 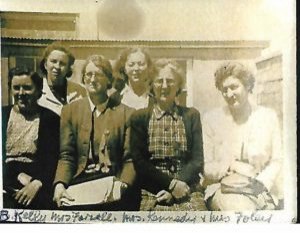 The ‘Carlovians’ who attended that summer School

Mrs Nora Manning Robertson of Huntington Castle a prominent member of Clonegal guild ICA collected the four Carlovians plus their luggage, conveyed them in her car to the train station and they were on their way to a most enjoyable break where some lifelong friends were made. During their sojourn there Mam taught leather glove making and Moccasin slipper making, she learnt rush-work and hedgerow basketry,  two beautiful new skills which she carried on and spent many hours teaching for years afterwards.

A photographer arrived unannounced one day while they were domiciled in Garryvoe  and Mam bought two photos that she positioned in a prominent place on the rather large mahogany side-board in the parlour, unfortunately some of the ICA ladies were out collecting rushes from the marshlands and old man’s beard from the hedgerows so they missed the photo shoot. Included in the large photo are some ladies that Mam and I would meet, know and respect for years afterwards (but she was unable to name the two ladies who are in the back row of the small photo). Alice Ryan, Kay Donnelly, Sheila Connolly, Ann Roche, Muriel Kehoe, M/s King and Phyllis and Helen O’Connell spring to mind as Organisers and some of them are in the large photo.

On November 18th 1947 an entry penned reads- Mrs Hamilton attended a meeting in the hall and on December 2nd 1947, Mam attended a meeting in Hunting Castle and an RDS lecture there on December 5th, that lecture must have been expected to be of great importance or interest as Grandma Mary Kavanagh and her sister Sarah Kavanagh travelled ten miles from the Wexford side in a pony trap and stayed overnight in our house in order to attend. All members were engaged in basket making after the business/agenda was concluded on December 16th that was the last official meeting held during 1947 but on December 31st and again on January 1st and January 3rd 1948 Peter Murphy (Cross Country Quiz fame) collected Mam and other members who could sing and brought them to a carol singing practice at the Castle in Mrs Robertson’s car. The carol service was part of the programme for the ‘little Christmas’ children’s party that was held annually in Huntington Castle and organised by ICA members including Mrs Robertson

Another lady who attended was Joan Sheehy, although Mam had never mentioned her I think she was from Tipperary, remained a member of ICA and was teaching handcrafts when I attended a six weeks E.S.B. Scholarship course at  An Grianan Termonfeckin January 4th to February 14th 1960. Joan Sheehy was then house keeper to Fr James Crowley CC Termonfeckin parish. On the night of Tuesday Jan 5th those attending the course were advised that after tea-time a lady would be coming to the ‘Bruan’ to teach all 14 of us glove-making at 8pm and the suggestion was that we should be courteous and attentive teenagers.

Joan Sheehy came early on her bike to the Bruan, this large room was usually utilised when the ESB gave demonstrations on the use and operation of electric sewing machines, indeed we had done dressmaking there during the afternoon under the tutorship of Miss Mary Delaney. However as our gloves would be hand-sewn the stress would be on the importance of electricity in providing adequate lighting while work was in progress. There was a huge box strapped on the back carrier and the hedgerow basket that was attached to the handle bars of her bike was full to overflowing, she was after-all catering for 14 raw students! By the time that one hour had passed Joan had succeeded in assisting the successful laying, pinning, outlining and cutting out of all components for a right hand glove from white Chamois skin, she then advised us to reverse the pattern and repeat all steps for the left hand glove within thirty minutes as we now knew what we were doing and she wanted to get us familiarised with Double Fourchettes and Quirks during the last thirty minutes before supper would be served at 10pm.

Before leaving after supper Joan informed us that she expected to see us all the next night Jan 6th at the same time even though it was a holy day of obligation, of course we complied but some of the girls faced a real struggle when it came to understanding which part/side of the Quirkes and Fourchettes needed to be set and stab-stitched to a finger/thumb of the glove to be assembled. Seated in the middle of the back row I quietly worked away on my gloves as I had made gloves and lambskin mittens under Mam’s tuition at home.

On Thursday night Jan 7th Joan Sheehy arrived at the usual time bearing a large envelope, greeted us as usual and walked straight to the back row of chairs, handed me a large photo then pointed to my mother and asked if that lady was related to me. I was totally taken aback not knowing what to expect next but I managed to reply yes that’s Mam, she then took hold of my left hand and raised it announcing that she had recognised the hands last night that had taught her to make leather gloves and slippers at the ICA Summer School in Garryvoe in 1946!!

I will now have that photo scanned plus the photo of the four Carlovians who attended that summer School also part of Mam’s report of the council meeting held on June 1st 1946 in the hope that others may have memories of the dedicated ICA members, organisers and crafters and the masterpieces they produced by the light of candles, oil lamps and Tilleys before the electric light reached them in remote areas of Ireland. Unfortunately the complete hand written report could not be scanned as there was water damage caused when the fire brigade attended to a chimney fire in the Kelly homestead some years ago.