Bob Dylan is now 81 but still trucking. He played the 3Arena last November. It’s part of his Never Ending Worldwide Tour, the one that kicked off in Milwaukie last November. It was his first time in Dublin for five years. When Covid hit, I thought we’d never see him on these shores again.

There’s always something happening with Dylan. He won the Nobel Prize in 2016. The fact that it was for his writing rather than his music stunned many people. He’d never been given due credit for this. I wasn’t that surprised. Maybe the surprise wasn’t that he was given it but that he accepted it. He’s famous for turning thing down.

In 2020 he started selling the rights to his music. That surprised me more. He hardly needs the money. Universal gave him an estimated $300 million for these rights. A year later he got a purported $200 million more from Sony in another deal. Not bad for a man who’s spent his life writing about the poor.
I had never missed a Dylan concert in Dublin. That doesn’t mean they’re all great. Some of them have been abysmal. A lot of the time he doesn’t seem to respect his audience. Neither does he move to the songs. I recently read that he suffers from arthritis. That made it seem not quite so blameworthy.

Is he doing the concerts for our sake or his? You might ask that of any artist, but he seems to make no secret of the fact that it’s himself he’s pleasing most. Every gig is transactional for a musician in some sense but Dylan gives off the vibe of ‘Listen to me if you want. If you don’t, go home.’ It’s not exactly Dale Carnegie.
The present tour, which finished with the Dublin gig, is called the ‘Rough and Rowdy Ways’ one, after his recent two CD album. It wasn’t a good one. The songs on the first CD are forgettable and often lifeless. The second one comprises just one 17-minute track about the John F Kennedy assassination, ‘Murder Most Foul.’ He wrote much better about the theme of assassination in songs like Only A Pawn in Their Game all those years ago. Why re-heat the soufflé unless you’ve got something to add to it? This song has little or no air to speak of and drags on interminably. I rarely listen to people who knock Dylan but it’s difficult not to if they’re talking about songs like this. He lets himself down on it.

Is this the same man who wrote:

Ain’t it just like the night
To play tricks with you
when you’re tryin’ to be so quiet
We sit here stranded
we’re all doing our best to deny it,
And Louise holds a handful of rain
tempting you to defy it…

Or that haunting line, ‘The ghost of electricity howls in the bones of her face.’

I sometimes wonder why I keep buying his records. Maybe it’s for the same reason I keep going to his concerts. It’s what the young people are now calling FOMO – Fear of Missing Out. I couldn’t take the chance of missing a good one. I’ve stuck with him too long. The ‘Never Ending’ tour will have to end sometime.
I first saw him live in Earl’s Court in London. It was 1981, the year Diana Spencer married Prince Charles. Photographs of them were everywhere but I didn’t look at them twice. I was on Bobwatch. 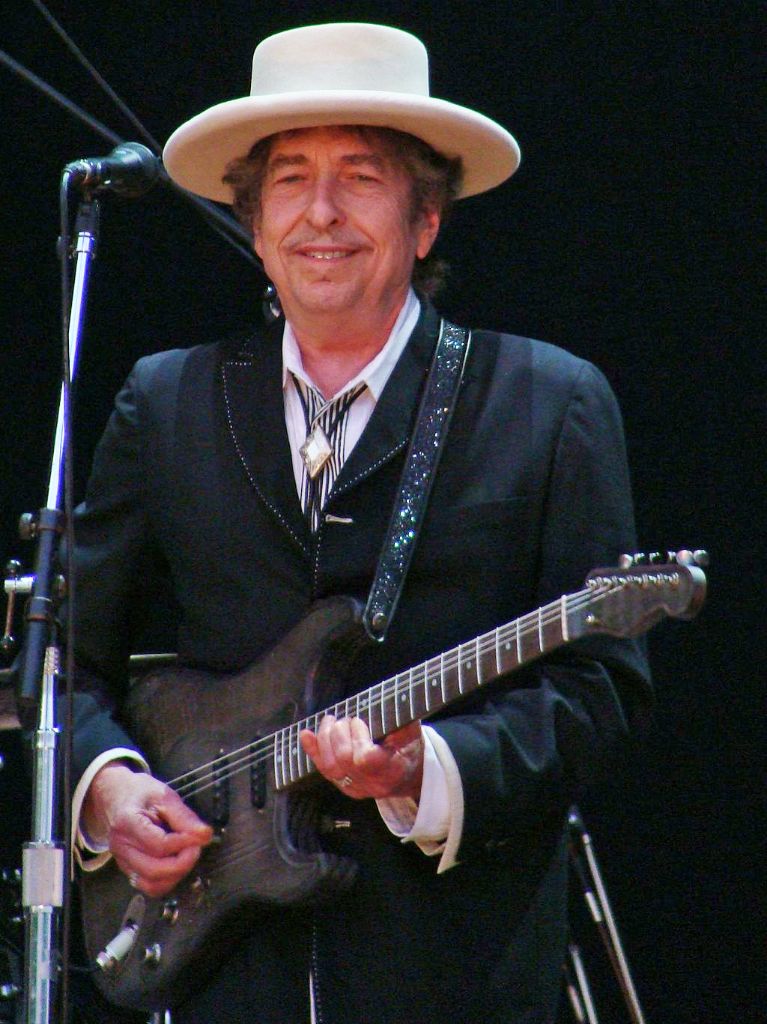 The only other performer who held that kind of resonance for me was Leonard Cohen. Throughout his career he was often compared with Dylan. They came out of the same barrow, pioneered the same singer/songwriter style that was popular during the folk boom, endearing themselves to the ‘youthquake’ movement of the sixties. Both had many peaks and valleys after that but then they had that Indian summer. Cohen died in 2016. Dylan – who must have taken double the amount of drugs Cohen did in his life – still motors on, apparently indestructible (though definitely looking his age).

I interviewed Cohen in 1988 when he was promoting his I’m Your Man album. He was a perfect gentleman, unlike what I would have expected Dylan to be if I ever got to talk to him. That’s unlikely. An interview with God would be easier to negotiate. (I hear you ask: Is there a difference?)

At one stage of our conversation I asked him what was the difference between himself and Dylan. ‘Bob Dylan is a planet,’ he said humbly, ‘I’m just a comet. He’s a supermarket. I’m just a shop on the corner of the street.’

They met in Paris once outside a restaurant. They were both doing concerts there at the time. Dylan asked Cohen how long he’d spent writing Halleluah. Cohen said, ‘A couple of years.’ It was actually seven. At one point he was banging his head off a hotel floor in his underpants trying to get the rhyme right. He then asked Dylan how long he’d spent writing Just Like a Woman. Dylan said, ‘Fifteen minutes.’

Maybe that outlines the difference between them. One man is an artist, the other was a craftsman. Cohen’s concerts were brilliant but buttoned down. Dylan’s ones are usually all over the place.
There was a time when going to a Dylan concert meant you were hip. Now maybe it means you’ve had a hip replacement. Only those of us of certain age – or should I say an uncertain one – go to see him nowadays. Sometimes I wonder why. He rarely connects with the audience. He doesn’t introduce his songs, doesn’t react when we applaud, hardly seems to even notice us being there.

At one of the concerts I went to some years ago he didn’t even face the audience. He stood sideways at his keyboard the whole night. I’d have been as well off listening to one of his CDs at home. In other ones he stood there with a hoodie that seemed to have been bought in Guineys for three euro. He looked like a terrorist as he murdered the old classics.

He was often half way into a song before I knew what it was. Tommy Tiernan jokes, ‘It’s not only us that doesn’t know what songs he’s singing anymore. Bob doesn’t know either.’
Sometimes I felt like a masochist going to see him. It was like a woman continuing to date a man who constantly abused her. I was like a moth being drawn to a flame. But I never complained about a Dylan concert the way other people I knew did. You paid your money and you took your chance.
His voice got croakier when the new millennium came in, which was saying something. Often he was out of tune. I didn’t mind that. It was Bob Dylan, after all. He could do what he liked. It was his world. The rest of us just lived in it.

I’ve been buying his albums since the early seventies. I have them all, the good, the bad and the ugly. As well as the bootlegs that have been coming out with astonishing frequency over the years.
Some years ago I found a CD dealer in Canada who had bootlegs of nearly all his concerts. These weren’t the officially released bootlegs from his record label. They were ones made by fans in the stands. Considering the fact that he did approximately a hundred concerts a year since the sixties, that was theoretically in the region of 4000 concerts. ‘I’ll take them all,’ I told him.

It was a joke, but I did orders large consignments from this man. It was exciting getting them in the post. I used to bring them up to the attic to play them so as the other people in the house wouldn’t complain about the noise. Being unofficial recordings, they were often of poor quality. Yet in a way that made me like them all the more. Often his voice was drowned out if someone who was beside the person doing the recording started talking or laughing or spilled a drink on the floor.

Such incidents became part of the tapes. I loved them for that. It made me feel I was at the concerts. Suddenly I didn’t have to leave the house to hear my hero live. I just had to put on my headphones, open the window of the attic and turn the volume up to Loud. I blew my eardrums off listening to him. It’s a miracle I didn’t go deaf.

In recent years Dylan has turned from a growling wolf into a wispy little pup. Like Rod Stewart, he’s started doing albums of old classics that had been sung by Sinatra and people from that era. If someone told me Dylan would do ‘Some Enchanted Evening’ when he was singing ‘like a dog caught in a barbed wire’ (to use Anthony Scaduto’s phrase) I’d have told them they were mad. But he made a great job of them.
One year he came to Vicar Street. Tickets were like gold dust. I heard of one girl who flew over from Germany and sat outside the venue with a placard saying, ‘Ticket wanted. Any price.’

Nobody was parting with them so I couldn’t make that one. I heard afterwards that the concert was a sensation. Bono even sang at it. I would have given my soul to be there. Vicar Street was such an intimate venue it would have been like having him in your kitchen.

I hope Dylan goes on for a long time more even if he infuriates me more than he entertains me these days. He changed all our lives way back when and that should count for something. And he’s still writing classic songs. Listen to Not Dark Yet if you don’t believe me. Okay, so it was a few years ago, but not that long.
I don’t play Blowing in the Wind much anymore. I prefer Idiot Wind. You haven’t lived until you’ve heard him doing that at Fort Collins in a concert he did with Joan Baez. Check that one out too if you get a chance.