The community of Lismore didn’t allow a global pandemic to stand between them and their support for their global neighbours. The St Carthage’s Cathedral community switched their fundraising soup lunch to a take-away alternative. But Lismore’s Christian Aid organiser is adamant she’s no ‘lockdown hero’.

Maureen Doherty begins our interview by insisting that the take-away soup lunches were the brainchild of parish treasurer, Sandra Willoughby and she spends the next few minutes trying to convince me that I should interview Sandra instead. She said:

“It was Sandra’s idea to offer take-away soup. She said that if we bought in waxed paper cartons we could continue with our fundraising despite the restrictions.”

But eventually Maureen relents, conceding that she has been the Christian Aid organiser for Lismore for the last 17 years. During that time, she and the other members of St Carthage’s cathedral community have raised more than €22,000 for Christian Aid’s work, with most of the money coming from the weekly soup lunches held during Lent and Advent.

In the early days, the lunches were held in people’s homes but in 2015 they moved to the Red Hall, a former Presbyterian Church, on East Main Street.

Maureen keeps a list of volunteers who can be relied upon to make soup. She said:

“I ring round the people on the list. Some people are parishioners and others are unconnected with the cathedral but they always respond positively, turning up with turines of home-made soup. Some people bring home-made bread too.”

Maureen explains that some of the soup is even made with home-grown vegetables which flourish in Ireland’s sunny south-eastern corner. Each week, she would ensure that at least five different varieties of soup were available.

On the days of the lunches, an A-board set up outside the Red Hall would alert the people of Lismore that lunches were on offer inside. This year, the volunteers sold around 50 cartons of soup each week in exchange for a donation to Christian Aid.

Maureen’s enthusiasm for the soup lunches is clear, as she explains:

“It’s important to raise funds for such a good cause but the lunches are a great social occasion too and they help to build a sense of community. Before the pandemic, they provided social interaction for many elderly people as well as a good introduction to village life for newcomers.”

“The lunches are well supported by the Church of Ireland parishioners as well as the wider community of Lismore.”

Maureen worked as a nurse and midwife before training as a podiatrist, working at the Royal London Hospital in Whitechapel until her retirement before moving to Waterford where she has family links.

She was born in 1936, before the partition of India, in a ‘hill station’ called Murree in what is present-day Pakistan, while her British army father was stationed there. She lived there for only two years and remembers little of the experience but her years in London left a lasting impression:

“I loved living and working in the midst of such a rich, multi-cultural community. There were people from all over the world, Muslims and Jews, people from everywhere and it left me with the feeling that we are all one. Nobody is a foreigner.”

During her years in the ‘East End’, she was inspired by the charitable efforts of the Sikh community. She said:

“I love the Sikh tradition of providing a ‘langar’ or communal meal to anyone who needs it.”

Does Maureen see a parallel between the Lismore soup lunches and the Sikh ‘langar’?

Maureen’s ‘nobody-is-a-foreigner’ creed chimes with Christian Aid’s vision of a world in which everyone, regardless of their faith or race, is entitled to live a full life, free from poverty. The funds raised by Maureen and the others in Lismore are already reaching some of the world’s poorest and most vulnerable communities, people struggling as a result of poverty and climate change.

Today Maureen is enjoying the simple pleasures of life in rural Waterford, walking her beloved dogs and watching the birds in her walled garden, a place she describes as ‘paradise’. Until last year she was also tending a small flock of alpacas, as she explained: 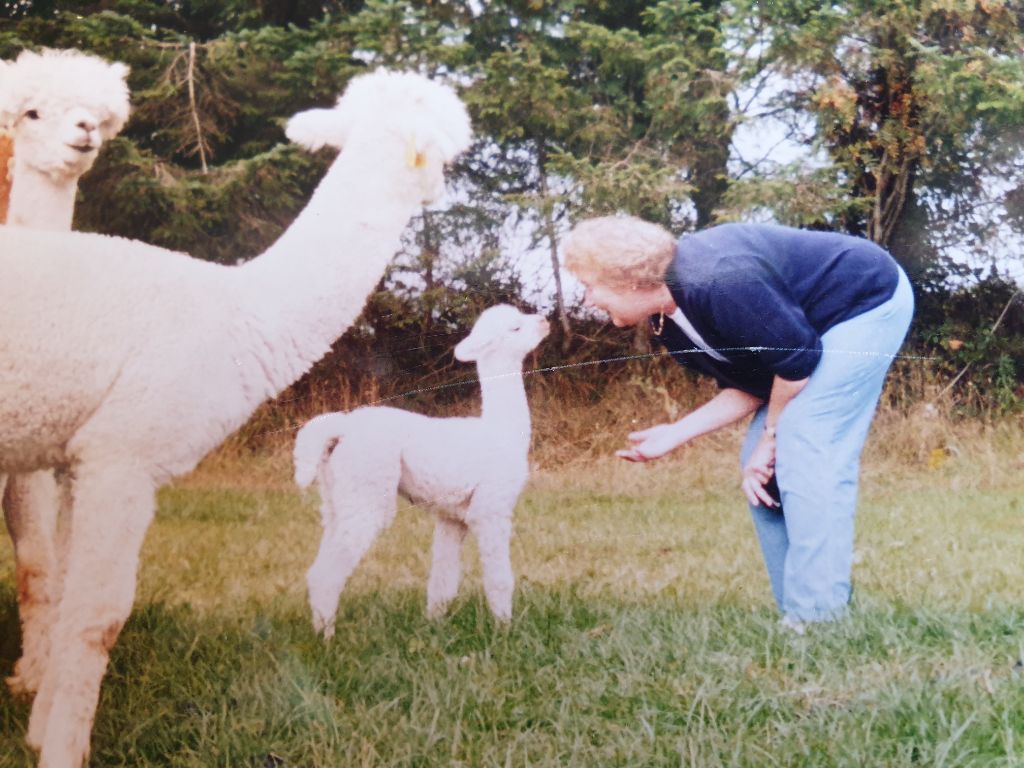 Maureen Doherty with her alpacas

“I couldn’t find anyone to spin their wool, so in the end I had to let them go. But I found a lovely petting farm to donate them to, so I’m happy that they’re being well looked after.”

Christian Aid Ireland Chief Executive Rosamond Bennett thanked Maureen for her many years of support for the charity’s work:

“We’re very grateful to Maureen as well as to Dean Paul Draper, Sandra Willoughby and all the members of St Carthage’s Cathedral community for their support for Christian Aid. It’s great to see our supporters finding imaginative ways to continue with their fundraising despite the pandemic.”

What is Maureen looking forward to next?

“The take-away soup has helped to keep the money rolling in during the pandemic, but I miss the sit-down lunches because they were always very happy occasions. I enjoyed the great atmosphere, the chatter and the buzz so I hope it won’t be too long before we can get back to normal.”

Maureen’s journey has taken her from present-day Pakistan via the East End of London to a village in County Waterford. She has brought with her a compassion for her fellow humans, a strong sense of community and a love for life. She concludes our interview with this reflection on her life so far:

“I’m a very ordinary person who has had a very lucky, blessed life. I often wonder why some people have everything and other people have nothing.”

Up to 20,000 people in Ireland may have the silent disease Hepatitis C – as the State’s target to eliminate the curable virus lags 21 years

More Doro Smartphones to be won in our July competition

Gold’s Value as a Safe Haven Seen in Global Pandemic