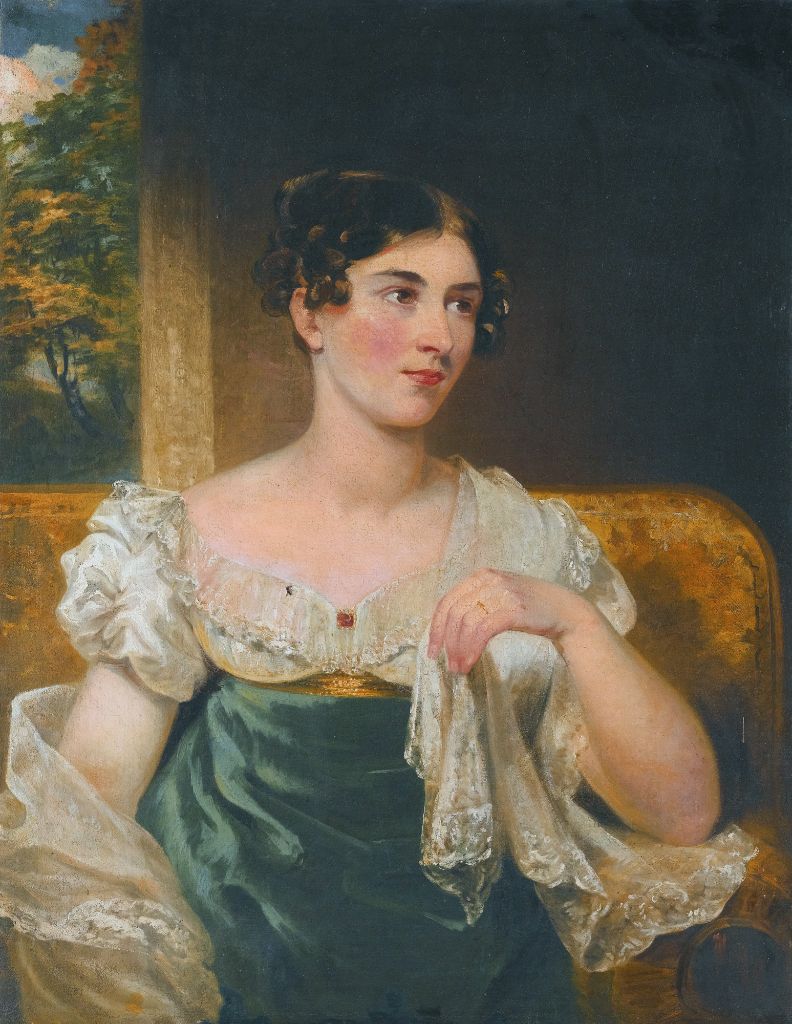 Born in 1800, Harriet Smithson was an actress from Ennis, Co Clare. Both her father and mother were actors and she made her stage debut in Dublin aged 14. Her performance received rave reviews and for the next few years she travelled the length and breadth of Ireland in various productions, playing anything from light roles to Shakespeare.

Ambitious for greater challenges, she was attracted to London and made her first appearance in  Drury Lane in 1808.  After a shaky start her confidence grew and she joined the Drury Lane Company in 1820 and was soon playing  leading roles to acclaim from  the critics.  But The Times critic was not impressed, describing  her  as  ‘as a face and features well adapted to her profession but [an actress]not likely to make a great impression on a London audience, or to figure among stars of the first magnitude.’

She made her Paris debut in 1827 in Sheridan’s The Rivals but received negative reviews. She fared better in another Sheridan vehicle She Stoops to Conquer  where she was highly praised for her acting ability.

Later that year she left a lasting impression on the Paris critics and public when playing Opheilia in a production of Hamlet. As one newspaper reported:

‘Miss Smithson acted the scene in which, robbed of her sanity, she takes her own veil to be her father’s body with utmost grace and truth. The whole passage which seemed long and relatively insignificant and even exaggerated in reading, had tremendous impact on stage. The most remarkable feature of her acting is her pantomime; she adopts fantastic postures; and she uses the dying fall in her inflections, without ever ceasing to be natural..’

In the audience on that first night of Hamlet was, arguably, after Beethoven, the most original composer of the nineteenth century  – Hector Berlioz. (1803-1869). Berlioz’s father was a doctor and it was expected Hector, too, would take up medicine. He did attend medical school for a time before, to the consternation of his family, he decided on  music as a profession. He was accepted as a student at the Paris Conservatoire  but his refusal to follow the traditional rules and teachings of the ultra  conservative  professors soon had him labelled an enfant terrible.

But he came round to towing the establishment  line which  enabled him to win France’s  premier music prize – the Prix de Rome – in 1830. In his lifetime  opinion was divided for many years between those who thought him a genius and those who  viewed his music as  incoherent, particularly when  the  vast instrumental  forces  he  often called for in his works  — including armies of brass and drums of all sizes –  often resulting in an  earth-shattering  blaze  of sounds which audiences  had never  heard before.

Berlioz recalls in his memoirs: ‘I come now to the supreme drama of my life. An English company had come over to Paris to give a season of Shakespeare at the Odeon. I was at the first night of Hamlet. In the role of Ophelia I saw Harriet Smithson. The impression made on my heart and mind by her extraordinary talent, nay, her dramatic genius, was equalled only by the havoc wrought in me by the poet she so nobly interpreted.

‘I read Moore; his melodies draw tears from me from time to time. He is her compatriot: Ireland, always Ireland! That is all I can say’

His recollections were, to put it mildly, selective. According to friends  he was completely besotted with Smithson and today he would probably be arrested for stalking.  Apart from writing her almost daily letters and sending her flowers  he even rented an apartment close to her own so that he could follow her movements.

For years  she ignored his extraordinary advances, but eventually in  1832, after  numerous rejections, she accepted an invitation to attend  one of his  concerts. They met after the concert and quickly became lovers. Berlioz soon proposed marriage and her initial reaction was lukewarm, and both families and friends were against the union. Berlioz persisted and they were married at the British Embassy in Paris on 3 October 1833. Liszt  was a witness. Just over a year later the couple’s only child  Louis was born.

The first few years of the marriage  were happy and Berlioz  was enjoying huge success across Europe both as a composer and as a conductor. His works were  applauded for their dramatic intensity and originally.

His most celebrated composition, then and now, was the Symphonie Fantastique, an  episodic work said  to have been  inspired by his early infatuation with Smithson. Fellow composers and critics have been in awe of him for  the last one  hundred and fifty years or so,  despite falling out of favour  in the decades following his death. César Franck once said that ‘Berlioz’s whole output is made up of masterpieces’. And there’s a story that Paganini fell at his feet and declared him the rightful successor to Beethoven. In more recent times George Bernard Shaw said: ‘Call no conductor sensitive in the highest degree to musical impressions until you have heard him in Berlioz and Mozart.’ 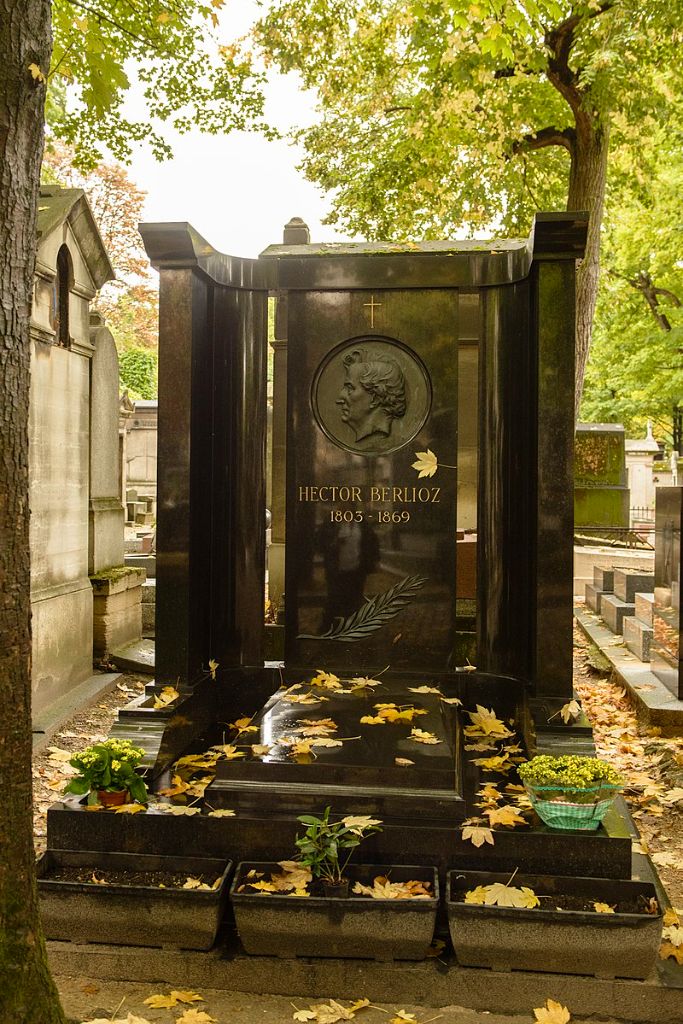 United in death.. the grave of Hector Berlioz, buried with his two wives, Harriet Smithson and Marie Recio, in Montmartre Cemetery, Paris

But while Berlioz was feted far and wide, Smithson’s  career was going from bad to worse, not helped by  her organising and appearing in  a number of  financially disastrous productions.

She became  jealous of his success and  there were stories that she often physically abused him. While he continued to support her financially their relationship was now toxic and he embarked on a series of affairs before becoming seriously involved with  the opera singer Marie Recio who would become his second wife.

Smithson  eventually retired from the stage in 1836.  She left their apartment  in 1843, ten years after they were married. Over the next few years her health deteriorated and she suffered  a series of strokes.  She died in 1853. She was  buried at Cimetière Saint-Vincent, Paris but  Berlioz later had her body re-interred at the Montmartre Cemetery where they both rest today, along with his second wife.

Like Smithson Berlioz’s final years were marred by illness no doubt brought on by an exhausting series of  European tours . He also had to  endure the crushing loss of Smithson – despite their battles, bitterness and break-up he always held a candle for her – as well as the sudden death of his second wife. If that were not enough his beloved son Louis died abroad with yellow fever.

Berlioz’s output was enormous. His music can be challenging because it is so original and but  his output is well worth exploring. Here are a few suggestions.

Symphonie fantastique and Harold in Italy.