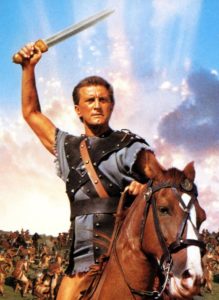 People sometimes speak of acting as being the career choice of tenderfoots. Not for Kirk Douglas. He talked of a 1991 helicopter crash in which he was involved as if it was a scene in a movie. Two people died in it. He was a mere 75 years of age at the time, a veritable stripling. ‘I try to stay in shape,’ he said, ‘There are no roles for fat leading men.’

We were all gobsmacked when Bob Hope and George Burns reached the century.  Asked what he wanted for his 100th birthday, Burns quipped, ‘A paternity suit.’

Both men died a few months after that benchmark. Douglas was having none of that. He got to 101, then 102…and you found yourself thinking:  This man can go on forever. But he went to his reward on February 5th last.

He had four sons, one dying of a drug overdose. Michael is obviously the most successful. Kirk said of him once, ‘Michael didn’t have the advantages I had in life. He was born rich.’  And elsewhere, ‘If I knew how much of a big shot he was going to be, I would have been nicer to him as a child.’

The remark was typical of his wit – and sagacity. Having worked his way up from being a ‘ragman’s son’ (the title of his 1988 autobiography) to a member of Hollywood’s royalty, he never forgot where he came from. Nor the value of a buck.

He wasn’t a stick-in-the-mud but he knew the truth of that old dictum, ‘Early to bed and early to rise, makes a man, healthy, wealthy and wise.’  I remember reading somewhere that when guests were overstaying their welcome at his house one night, and getting a bit too merry on drink , he went upstairs, got into his pyjamas, came back down and, with a twinkle in his eye, started flicking the light on and off repeatedly to give them a not-so-gentle hint to depart.

He was born Issur Danielovitch in Belarus 1916. Today he’d probably have stayed with that name. ‘Old’ Hollywood preferred to sanitise people, to strip them of their ethnic origins. But his Russian background was detectable in that chiselled jawline, those passionate eyes, a voice that sounded as if his voice was full of sandpaper.  And the trademark dimple.

Another year, another Late Late season..

No show like a Joe Show.. Michael Lyster remembers the great Joe Dolan