As Eurovision celebrates its 50th birthday, Shay Healy recalls his triumph as the writer of Johnny Logan’s winning What’s Another Year

As the ‘what’s’ Another Year’ plane took off for Amsterdam I found myself in an unusual situation.  As well as being the songwriter of Ireland’s entry to the contest, by default I had become Press Officer for the RTE delegation so I was obliged to present the best side of the Irish team and to stay close to Johnny Logan in case he hit any snags.

We soon discovered that we were tipped as possible winners of the competition, but I dismissed the idea and settled down to an intense week of dinners, receptions and parties.

It’s mad to think that the Eurovision Song Contest is 50 this year! Historically, the contest still has no peers and over those fifty year has seen the pictures go from black and white to vivid color, from analogue to digital, from electricians climbing up on a ladder, to the computerised mega show it is today.

Sadly in 1981 orchestras were phased out and replaced with backing tracks. I hate backing tracks in competition because everything is too rigid. No natural swing. Metronome is King and that’s not good for music.

Besides the excitement singers with orchestra would give the judges a better chance to compare songs and find a worthy winner.

We satisfied ourselves that the technical requirements for our song and our lighting cues were correct and then called for conductor Noel Kelehan who raised his baton and conducted us into the pub next door. Which became a regular stopover for us for the rest of the week.

Another important item on the agenda was, which country would have the best craic and Ireland off to a glorious start. With Johnny Logan’s piano player, Andy O Callaghan at the piano, we had a talented, consummate musician who knows so many songs, from Skibbereen to Status Quo.

Dymphna my wife, was the first to make friends with the Turkish delegation. We were delighted to find out that they were just like us! The Turks gave up on her name, and rechristened her Dumptruck. We happily stayed up till dawn, drinking and carousing with our new best friends. 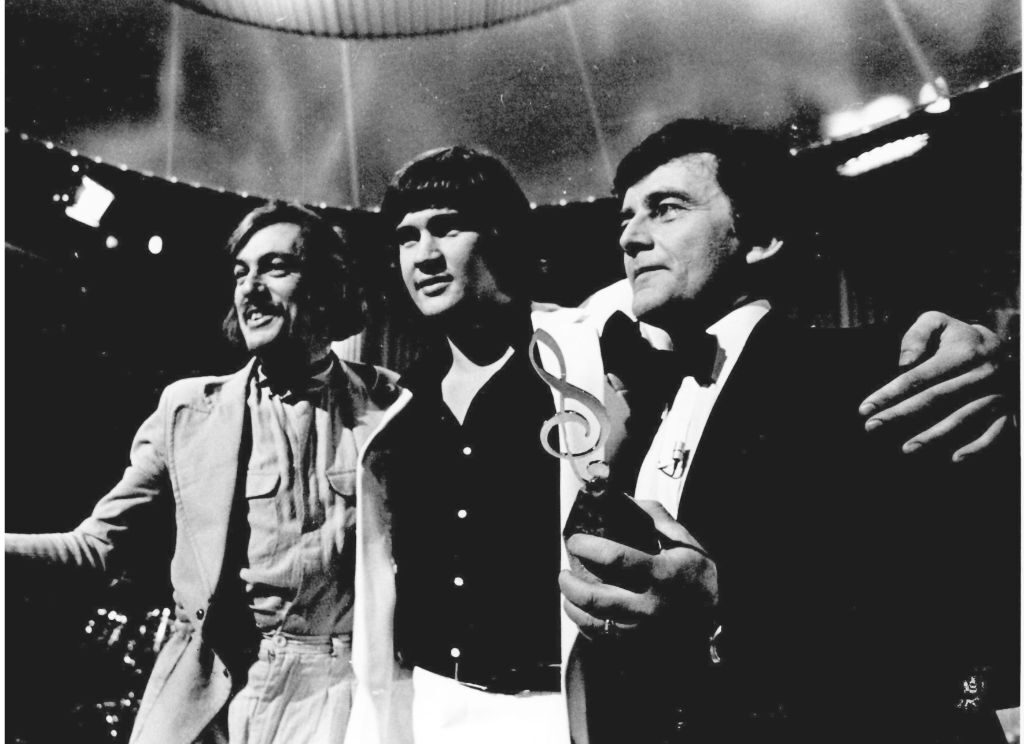 The word spread:  every night, in the run up to the final, the lounge in the hotel was jammed with Andy filtering through the good singers, playing a blinder. He looked like he was about 11 and innocent. No way! But who was that standing behind the piano. Why it’s Louis Walsh, the man who discovered Johnny Logan. Wondered what became of him?

When we first arrived in The Hague people were getting a laugh from a t-shirt I was wearing, which said on the back ‘IT IS IMPERATIVE THAT I WIN THIS CONTEST’. Roy Esmonde our photographer friend suggested that we should do a thumbs -down pic in case we lost, and a thumbs-up in case we won.

Back at home all our families were gearing up to watch the show. I was particularly anxious about my dad, who had suffered a minor heart attack two weeks prior to the contest so he was being minded. And then suddenly it’s on. You’re here and the contest is on in a couple of hours, the place is alive, with everybody from stagehands to the orchestra brass section, all contributing their own small tile to the mosaic of the whole picture.

I suddenly remember there were 24 other writers feeling the same as me. We found out that although the Eurovision is a song contest, the writer is neglected and left almost excluded.

Enough of the complaining, let’s go up to the auditorium. The Halle de Congress was a vast space. Johnny sat at the edge of the stage, in jeans and jumper noting the people coming in so that he could have some mental picture of his audience when he sang and had to face the bright lights. The only bit of advice I gave to Johnny was, ‘Stay on your stool until you reach the ending of the sax solo …and go for it on the last verse. Johnny gave a flawless performance and on cue he stood up from the stool and the boy became a man.

The place went bonkers! On stage there was lots of huggin’ and muggin’ through a maelstrom of producers, performers and musicians, Johnny and myself in the middle of it all. Then Johnny reprised the song, to an even greater reaction from the crowd, and then he whispered the unforgettable line ‘Ireland I love you’.

It was a rude surprise to find that Johnny had been swept off in a sea of flashbulbs and television cameras, and I was dragged upstairs to do an interview live on the air. When I got back down, the party was gone.  I made several attempts to find them, only to see them passing by in another corridor 40 feet away from me and by the time I got down that corridor, they were gone again.

I decided to abandon it and I set off to walk across this huge plaza and I could see the red light of the hotel that was housing the CBS winners party. An along the way I bumped into Pat Kenny and the late Aine O’Connor. We sat down on the side of the road and giggled like children. Security was tight and I almost wasn’t allowed in, because I was the writer. There was a slot outside the door into which you would slide an identity card. Inside four or five other CBS Artists, were carelessly thrown on the floor, discarded. That’s showbiz.  I finally linked up with the gang back at the hotel, Irish people drove from miles around and Mossy Stack from Tralee came on the four hour trip from Belgium. He was in plenty time, the sing song was only getting going. Across the room I’d lock eyes with Johnny for just a second, which was binding us together as Shakespeare said ‘With hoops of steel, we would always be brothers form now on.

The next night at the Ambassador’s residence, with far too many vodka and oranges in me already, I still insisted that I was going to make a speech. In the middle of the speech I began to cry, when I remembered something my 11 year old son Oisin, had said to me, ‘Dad, what’s it like being a star, and having a son who is a diabetic?’ Cue tears. I cried and I cried so they all shouted at me and went off and left me. My brother Fin was the only one loyal enough to stay. Now it was two real brothers, locked into an emotional embrace. My brother steered me into a small dark pub and we sat at the bar and drank more vodka.

Nothing could dissuade my brother from buying a teddy bear as a memento of two brothers on the lash. When the deal was concluded, we realised that the arse was already burnt out of the teddy!

Amsterdam airport was hopping after Johnny’s victory, with the new found freedom to spend. I bought several gadgets. Myself and Dumptruck didn’t hear the call for our plane until the very last minute when we were forced to run down the corridor, on this mad dash. DD ran into a plane of glass and cut herself badly on the head, but we still had to hustle her onto the plane with a towel wrapped around her head. Needless to say the rest of the troop didn’t let us off lightly. Then as we were about 20 minutes out from Dublin, I felt a tug on my sleeve from my brother with the squashed teddy bear. I leaned forward to him and I asked ‘what’s up’ to which he replied, ‘I wish the merry-go-round didn’t have to stop’.  He was right, it was only starting.

RTE had a limo waiting for us, full of champagne. As press officer for the Irish delegation I announced a Press Call at which Minister P Flynn was presiding.  Out the front, Johnny was being mobbed, the place was mayhem. The nice people from RTE told us there was a limo waiting for us outside the back. We were determined to go straight to Vincent’s Hospital, casualty, but we managed to side track the driver, to swing by Madigan’s in Donnybrook. When we walked in the door, the whole pub rose and gave us a standing ovation. 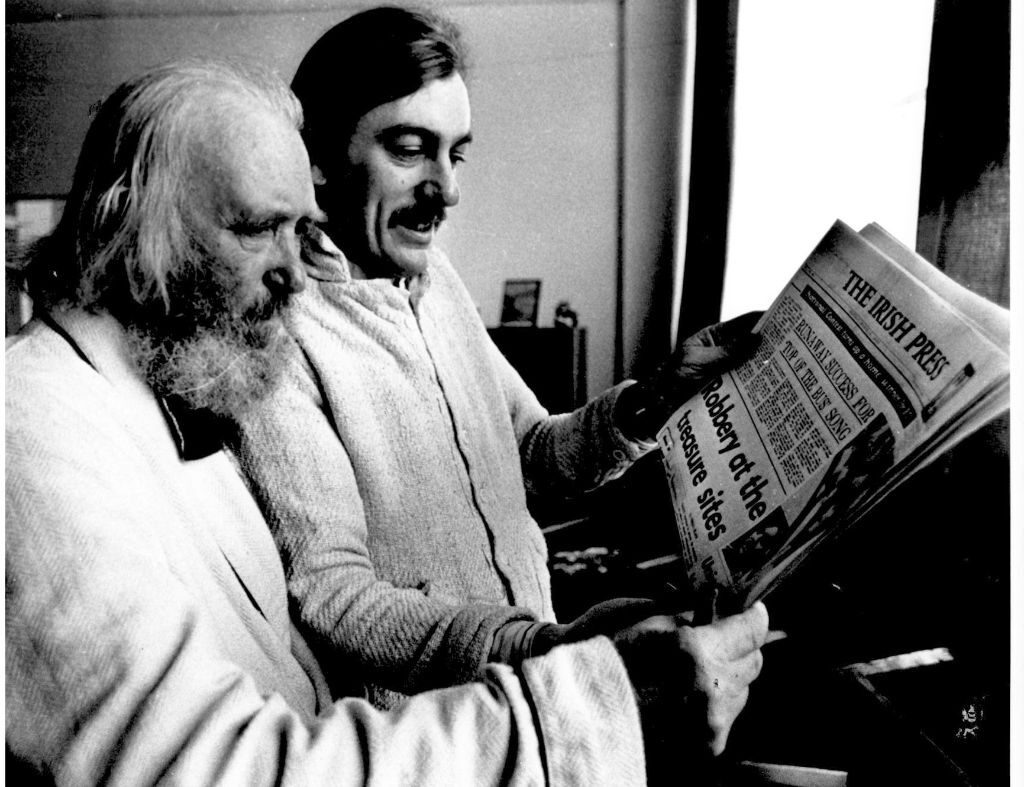 Shay and his father

That night a welcome home party was held, in Portmarnock Country Club, it was one of the first places in Ireland to have a big screen and it was a significant week also, for soap operas in Ireland. JR Ewing had just been shot in Dallas and the whole nation was trying to guess who was the culprit. Some genius had the idea of marrying two special moments on the television and in life. And so we celebrated, Johnny Logan singing What’s Another Year rotating with a clip of JR Ewing being gunned down in Dallas.  And or the rest of the evening we saw JR being shot followed by Johnny Logan saying Ireland I love you, followed by JR again..

The Eurovision song contest can be a terrible disappointment. Fast forward to 1984 and Linda Martin is representing Ireland singing a song written by Johnny Logan, Terminal Three was a famous member of the show band Chips and her fella at the time, Paul Little, was quietly confident. We were sitting in the auditorium when the contest began, and as we got to the end of the voting process, it looked like we would be winners. I even leaned across my wife to Johnny ‘This is your real destiny’, until up popped three little Swedish blond boys, in their cutsie trousers and tops.  The Herreys from Sweden beat us by three points! Luxembourg Square was the saddest place in the world and robbed of all the adrenaline of the night before, we collapsed onto the bus and headed for home, just one step away from greatness for a second time. I later heard this story from Tony Woolcott who was the managing director of CBS records: ‘Myself and one of the other executives had taxied out onto the runway of Heathrow airport, ready to take the private jet for the one hour jaunt to a victorious Linda. When I found out she hadn’t won, they turned the plane around and put it back in the hangar’.

Happy 50th Eurovision, I enjoy you now on a different level. I am astounded and delighted and love the flamboyance and the gaiety.