Conor O’Hagan covers the country in his latest group of walks, taking in counties Meath, Limerick and Clare 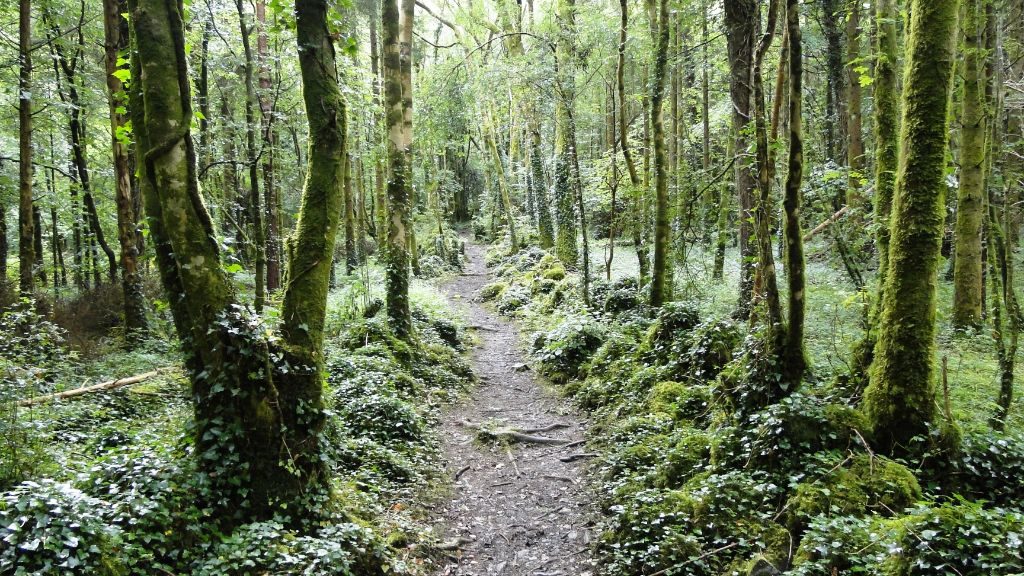 Situated in the south-eastern extremity of the Burren in Co. Clare, Dromore Woodland Nature Reserve is an area of approximately 400 hectares. It is owned by the Irish State and was established as a nature reserve in 1985 because of the diversity and richness of its flora and fauna.

This richness comes from the fact that it has many different habitat types including a river, lakes, turloughs, callows (flooded meadows), limestone pavement, fen peat, reed beds and rich woodland species. The reserve has historical and archaeological aspects – the 17th century O’Brien Castle is still standing by the lake edge. There is also the site of Cahermacrea Castle, the site of Kilakee Church, two ring forts and a lime kiln.

Two self-guiding nature trails of approximately thread the woodland and a section of the 140km Mid-Clare Way also passes through. This loop overlaps on part of the Castle Nature Trail and the Mid-Clare Way. The loop starts at the main car park – an Information Centre opens from June to September.

Start from the village of Ruan (10km northwest of Ennis town which is on the N18 between Galway and Limerick). Dromore Wood trailhead is only 2km from Ruan and is signposted from the centre of the village.

Starting from the car park follow the purple National Loop arrow along the tarred roadway back in the direction of the main vehicle entrance. You will be also following the Mid-Clare Way (marked with yellow arrows and the familiar trekking man logo). After 300m the loop swings right into woodland and by the ruins of Killakee Church.

Emerging onto the main roadway again, the loop veers right continuing in the direction of the entrance before turning left into woodland just before the exit. You will leave the Mid-Clare way here. After meandering through woodland – running parallel to the boundary wall – you exit the woodland and join a sandy laneway where you turn left.

Shortly afterwards, the loop rejoins the Mid-Clare Way and wanders along the wooded edge of the reserve for almost 1km. The loop then leaves the Mid Clare Way again to follow the Castle Nature Trail (one of two established loop walks in the reserve).

This 1km section of the loop takes you onto the shore of Lough Garr and Dromore Lough – at the end of which you rejoin the Mid-Clare Way for the final section back to the trailhead.

The final 400m of the loop passes by the imposing O’Brien Castle and along a boardwalk to reach the trailhead. 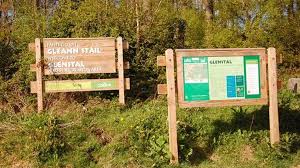 This loop gives fine views into north Co Limerick and South Tipperary and of Keeper Hill to the north. The return section overlaps with the Slieve Felim Way – a long distance walking route which stretches almost 36km from Murroe in County Limerick to Silvermines Village in County Tipperary. Near the end the loop descends into natural woodland where in Summer, the rhododendron is spectacular.

The Slieve Felim region is an area between Limerick City (in County Limerick), Nenagh, Thurles, and Tipperary (in County Tipperary) – and so called because it is dominated by the Slieve Felim Mountains. It is a place of quiet beauty and natural rural charm. Here the visitor can enjoy the numerous villages, or the unique atmosphere in a small country pub – and get close to nature among the countryside rich in fauna and flora.

With your back to the car park at the entrance to Glenstal Woods, start out along the surfaced roadway on your right. The road gently ascends towards Meentolla and, after 1km, reaches a crossroads where you veer right.

Travel 1km along this roadway to reach a barrier entrance to Glenstal Woods. Turn right here.

The loop now ascends gently for 1km before levelling out and giving fine views into north Co Limerick and South Tipperary. After descending into Gleno, it ascends again for 2km to reach its highest point at 350m – with spectacular views of Keeper Hill to the north (left). Shortly afterwards it swings south, circling the Slieve Felim Mountains and joins the long-distance Slieve Felim Way – denoted with the distinctive yellow arrows and walking man. Your loop overlaps with the Way on its return to the trailhead.

After a 4km stretch along the forested southern shoulder of Slieve Felim, the loop descends into more natural woodland. 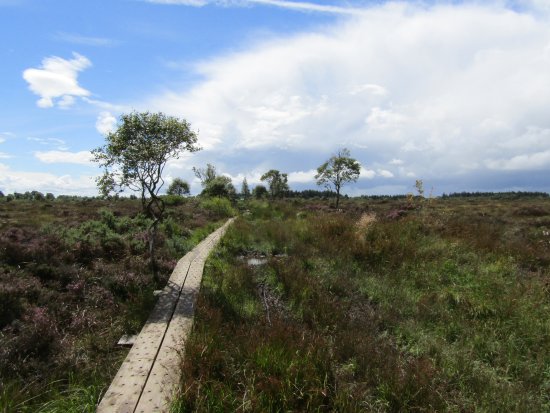 Throughout most of history Irish bogs were impassable. To cross the wet, boggy terrain people built bog roads or ‘toghers’. In the 20th Century, as the bogs were exploited for fuel, thousands of important archaeological finds were made, including swords, jewellery, trumpets and human bodies (preserved by the acid nature of the bog).
Another interesting use of the bog was to keep butter cool during summer and there have been many finds of butter kept in wooden container called ‘methers’.
Girley Bog is a site of considerable conservation significance as it comprises raised bog, a rare habitat in Europe and one that is becoming increasingly scarce and under threat in Ireland. The loop covers a variety of landscape of forest and bogland and has been developed as an eco-walk with interpretive panels throughout. The early section traverses coniferous forestry planted on high bog, the trees are fast growing species (sitka spruce and lodgepole pine) that originate in North America. The main element of the loop is within the bogland where there is a wonderful variety of birdlife, plants and animals.

Leaving the trailhead, the trail follows a forestry track for 600 metres to a crossroads from where the loop proper begins. Turn right here.

The loop travels another 1km to reach the end of an old bog road. Here it turns left onto a woodland trail.

Now the loop passes through deciduous woodland and coniferous forestry to exit onto a forestry roadway. Turn left here.

Follow the forestry roadway for 1km before turning left and joining an access road to bogland. Climb a stile at a gateway and follow a grassy track for 300 metres before turning left, and crossing a short section of bog before joining a bog roadway where you turn right at an interpretive panel. After a short distance the loop turns sharp right and follows a track through a line of trees.

Exiting the trees, the loop turns left onto an old bog road again and for the next 2km circles a raised bog area. The loop rejoins the outward section at the crossroads mentioned at B above, where it goes straight and covers the final 600 metres to the trailhead.