You might recall how, at some stage over the past 50 odd years, you took a journey with Michael Palin. Arguably, the journey has never really stopped.

From Pole To Pole, around the New Europe, across the great oceans and up to the Himalayas, he’s been there, and before all that there was the small matter of Monty Python and the holy grail and The Life of Brian and God knows what else. He’s been a fixture in our lives, and a welcome one. As he says himself: ‘I’ve been incredibly lucky.’

Michael’s seemingly endless travels bring him back to Ireland at the end of this month for The Thirty Years Tour, a stage show to mark the publication in paperback of his third and most recent volume of diaries, Travelling To Work, which covers the years 1988 to 1998. The show will have Michael, aided by archive footage, photographs and recordings, casting a long look back at what has been a truly remarkable life.
I joke to Michael (he laughed; he didn’t have to but he did) that when I looked up the ‘long’ version of his CV, printed on his website, it took me most of the night. ‘Sorry about that,’ he chuckles, but my comment wasn’t entirely tongue in cheek. Now aged 72, he seems to have lived three lives.

Born in Sheffield in 1943, his first stage appearance while at school resulted in him falling off stage. Chances are it got a laugh, and by the time he’d wended his way to university at Brasenose College Oxford, he was a regular thespian. At college he began writing comedy while reading history. Within a few years he had married wife Helen, met Terry Jones, a future Monthy Python partner, and was working for the Frost Report.
After all that, the graph just kept going up and up. By 1969 the first Python series was aired as the group became the Beatles of alternative comedy. Michael wrote and starred in the Python films which have become cornerstones of modern popular culture, then later we had his brilliant turn in A Fish Called Wanda, and then he turned himself into the David Attenborough of travel programmes.

It’s mind boggling, so it’s not surprising to hear that he’s happy with the way it all turned out.
‘There are moments where I could say my career could have gone more towards acting, I could have gone on to being a more ‘regular’ performer, but then I think, well, what has enriched my life is going off in all sorts of directions,’ he says. ‘Some of them have been cul-de-sacs, but not many.’

The most recent diaries begin at a time when Michael was about to embark on one of his most famous journeys, Around the World in 80 Days. It became a TV classic, but it’s remarkable now to consider that at least four people had turned it down before the opportunity landed on Michael’s desk. When he says ‘I’ve never regretted it’, it’s a stylish understatement. The show perfected the template: Michael as an engaged, humane and always interested travel companion for the viewers at home.

Looking back, he says people responded to seeing other people from different parts of the world but broadly living similar lives. ‘When we did the series we talked to people doing their everyday things, rather than trying to put a perspective on it, of experts talking about global warming’ he says. ‘It was really just about the people you find out there, whose lives can be just a daily grind like our own.’
Before that series he had made a programme about the Derry to Kerry train journey, something that allowed him to seek out information about his Irish-born great-grandmother. He says now that it is his family that imbued him with a work ethic which has stood him in good stead over the decades – even if it meant he ultimately parted from the script his parents had written for him. 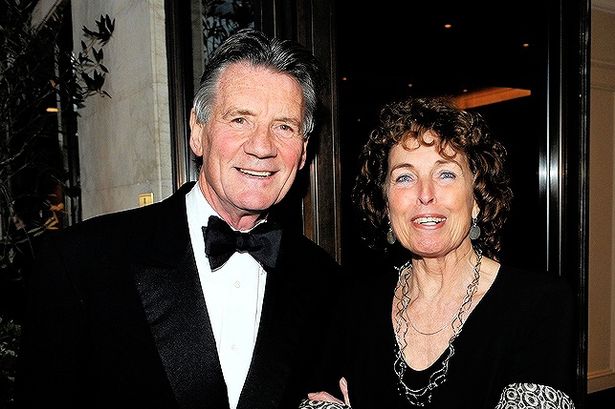 ‘My mother and father always had the virtue of work and doing things and being involved in things,’ he says, ‘but I think it was partly due to the fact that I didn’t fall into what my father perhaps hoped I would, which was some professional job,  I don’t know, whatever. I bluffed my way through university doing comedy and writing comedy material and then we got our first job in the Frost Report, and it was always a series of just bluffing my way through, saying ‘I’m sure we can write this up, I’m sure we can do this. There were no clear parameters.’.
He talks about the enduring ‘fear of the freelance’ and of getting to the stage where, in most areas of his working life, he doesn’t feel the need to be so competitive any more. Novel writing – he has already penned two – is the one area in which he still feels a drive to match and beat what else is out there.He prefers to keep looking forward, whether it’s from the Python reunion mega-shows or his own trip down memory lane.

‘I’ve had a fairly long life now in the business, getting on for 50 years, so there is an awful lot of material from the past that people want to know about,’ he says. ‘So if you’re not very careful you’ll spend most of your time talking about things you’ve done rather than concentrating on something new. So that’s why I’m quite enjoying doing this series of shows for the book and that will give me a chance to talk about that in my own way, talk with the audience, hopefully get their reactions, and then I can leave that and get on with something new.’
It promises to be a few evenings of glowing reflection, spent in the company of someone whose hugely likable screen persona seems to match the man in real life.

‘I don’t feel I have got to retirement age,’ he says in words that should inspire anyone of similar vintage. ‘When I was 65 I didn’t feel ‘well, that’s it, I’ll put my feet up’. Absolutely not. There is more and more to do.