November has swung around again and everyone begins to think of Christmas. Well, that’s not quite true. Even before Hallowe’en the yuletide preparations were well underway. The once popular yearly Church calendar of saints’ days is now replaced by the commercial exigencies of the supermarket. And no sooner have the witches’ hats, faux-cobwebs and plastic pumpkins been cleared from the aisles than the red-cheeked Santas and boxed fake pine-trees begin to make their appearance. Then comes the endless and inescapable playing of Christmas songs, ancient and modern. In these final months of the year, every time you venture out to get your few rashers and eggs you take your sanity in your hands.

But I don’t want this bit of scribble to turn into a ‘bah-humbug’ piece of curmudgeonry and bad-tempered writing. I enjoy Christmas as much as anyone else. It’s a great family time, particularly if some members arrive home from years in exile. And the giving and receiving of gifts is a wonderful experience, even if the gift makes one think immediately of a donation to the charity shop. So yes, it’s a great festival but, nevertheless, I think I may be permitted to voice impatience at some aspects which I find rather hard to take and I suspect others may share some of my views.

Our Christmases have by now become a mixture of diverse cultural borrowings. You might say that this is a reflection of the way our Republic of Ireland has become a nation of diverse peoples, far removed from when it saw itself as a homogenous Catholic nation. But this diversification of Christmas had begun long before we became a multi-ethnic society. By the time I came on the scene (I’m talking 1950s) the festival was already a compendium of myth and folklore, gathered around the story of the Nativity. And influenced by the imagination of Charles Dickens. 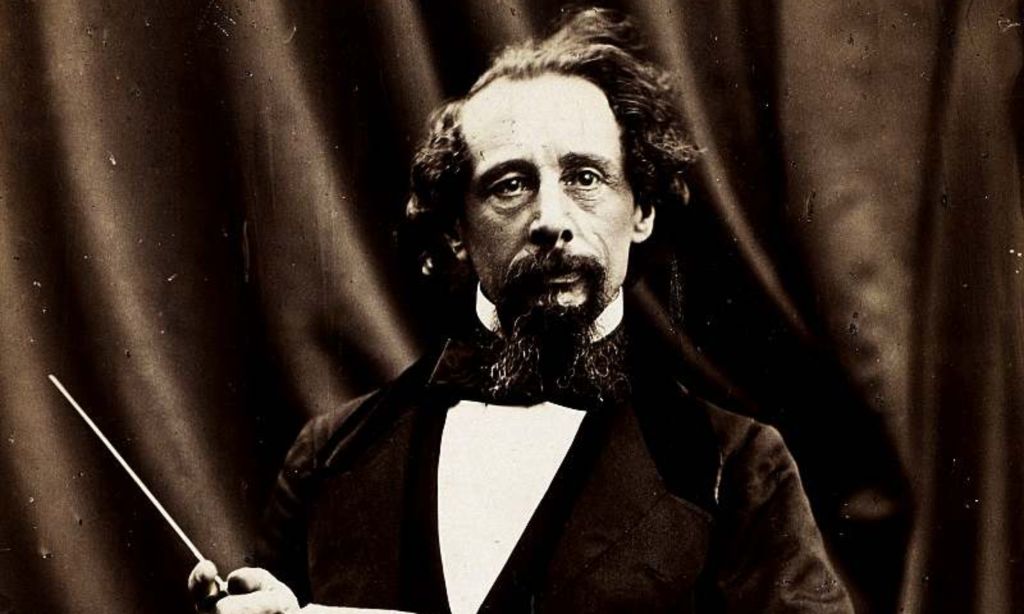 Dickens was a master of the English Language. But probably his story has lasted all the more because it neatly encompasses what we would like to think is at the heart of the festival itself: the defeat of ill-will by the supernatural power of The Good

Roman Catholic Ireland of the 1950s was a different society to the one we have today and St Luke’s story of the birth of Jesus was central to the celebration of Christmas. There used to be life-sized representations in Churches of the stable where the great event occurred and this continues to the present, though on a reduced scale. There also used to be much smaller ‘cribs’ in people’s houses: Joseph and Mary around the new-born child in the manger, as Luke had described, surrounded by animals, which Luke had not described. Neither had he said that the shepherds and the three wise men had arrived together to pay homage, but these were minor details. The story of the coming of the child who will save mankind is surely one of the most entrancing of all time, though somewhat overshadowed today by the commercial interests of the marketplace.

As to the imagination of Charles Dickens – once so dominant in the Christmas iconography of my younger days – his influence has by now faded, though a tincture remains. There are still many Christmas cards that bear the imprint of that long-gone Dickensian world of horse-drawn coaches rolling into town in a snowy blizzard. And there are still some jolly Pickwickian old gentlemen to be seen pictured sipping their mulled wine behind the mulled windows of wayside taverns. But they are a disappearing species, although Ebenezer Scrooge and his Ghosts of Christmas Past, Present and Future still survive in yearly revivals on stage and screen of Charles’ ever-popular seasonal story ‘A Christmas Carol’.

The mention of Santa’s reindeers reminds me that there is one iconic symbol of Christmas without which Christmas would not be, well … Christmas. Santa’s red and white outfit and flowing white beard reminds us of his great ancestor, Saint Nicholas,

How come this longevity? Well, it’s down to the wonderful writing of course. Dickens was a master of the English Language. But probably his story has lasted all the more because it neatly encompasses what we would like to think is at the heart of the festival itself: the defeat of ill-will by the supernatural power of The Good. And how there must be room for everyone at the table no matter how scant the fare.

Such was the influence of Dickens. In decline now, before an indiscriminate assortment of images that are not very specific to the celebration of the Nativity. The Christmas tree has gone so much from strength to strength that it alone on a Christmas card, even bereft of decoration, evokes immediately the whole festival in all its variegated jollity. It seems like it was always there amongst us, winking its electric lights and shining out its baubles. But it wasn’t. 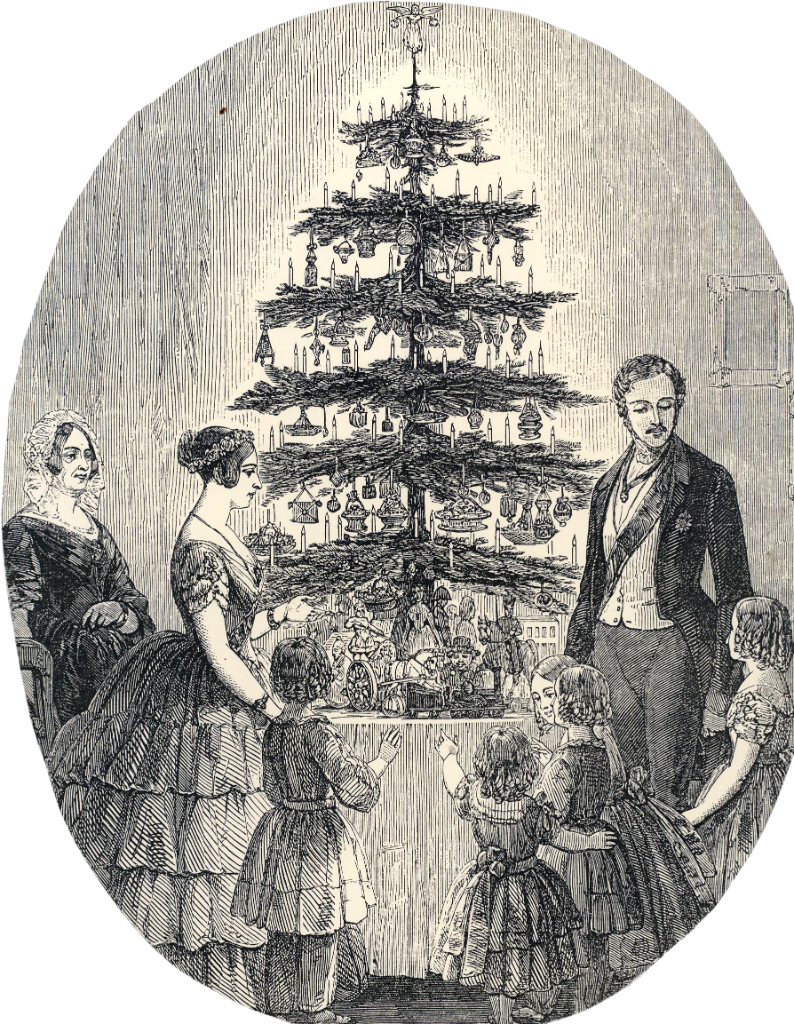 The only lasting mark Prince Albert left on English culture was the Christmas tree, a German custom that had long been part of the German Christmas and was an immediate success among the gentry of Britain and Ireland. Soon it became popular among all classes and has by now come to be the pre-eminent symbol of the celebrations

As is common knowledge, when Prince Albert arrived from Germany to woo the young Victoria, it was love at first sight. Much less successful was his hope to bring his wisdom to the English nation and to leave his mark on their political affairs. The British parliament soon put him wise on that score. The only lasting mark he left on English culture was the Christmas tree, a German custom that had long been part of the German Christmas and was an immediate success among the gentry of Britain and Ireland. Soon it became popular among all classes and has by now come to be the pre-eminent symbol of the celebrations.

And what is it that has kept Christmas cards so popular in this age of the email, the Zoom, the Skype and the WhatsApp? Yes, there are those who have changed over to the practice of sending digital greetings to their friends at Christmas, thereby saving themselves the bother and expense of sending actual paper cards with written good wishes. Nevertheless, packets of cards still appear on sale during November and are readily bought up. It seems that people are still intent on imparting a personal touch to the act of greeting others, especially their nearest and dearest, and do not favour sending a generic email message that has a ‘business-like’ feel about it; one which says: ’I’d like to wish you a Happy Christmas but in the shortest and least bothersome way possible’ (my addition in italics). Sometimes the sender even forgets to use the Bcc computer option which hides other recipients and one sees that the exact same message has gone out to several other ‘friends’. So much for sincerity! An actual card, with even just a sentence or two, is always much more appreciated. In the matter of Christmas good wishes, emails just don’t cut it.

Now please give me leave to mention my own particular bête noir: Christmas lights. And yes, I do understand the atavistic need we all have to brighten these winter days, the darkest of the year. And no, I am not criticising the City Fathers’ attempts to bring some cheer to the city centre. I am talking about the increasingly garish electrical adornment of suburban houses. This type of outdoor decoration began with the placing of a few electric bulbs in the front garden, in a tree or a bush perhaps, ‘to brighten things up’. Fine. However, of recent years, and under the influence (I think) of American TV and movies, electrical lighting has started to cover the whole front facades of suburban houses, complete with neon-enabled ‘on-off’ colours which have a terrible effect on those of us whose eyes have become somewhat sensitive over the years. Santa and his reindeers and elves often feature too, cascading down a roof illuminated by a host of white electric mini-bulbs simulating snow. It will be interesting to see if these expensive demonstrations of ‘good cheer’ will survive our 2022/23 cost-of-living crisis when even boiling an egg will become a BIG DECISION, thanks to escalating electricity bills.

These displays are a long way from the era in which it was the custom to place a candle in the front window to guide the wayfarer along dark winding rural roads and perhaps to the offer of a bed for the night. Suburbia put paid to that kindly notion, but yet the occasional candle is still seen in housing estates windows. Old customs die hard. Sometimes too one sees the seven-branched candle-stick, a symbol of the Jewish people and a reminder that Jesus himself was a Jew. Perhaps too this can be a poignant reminder of sufferings endured in the past and of the need for us to be men and women of good will towards others.

The mention of Santa’s reindeers reminds me that there is one iconic symbol of Christmas without which Christmas would not be, well … Christmas. Santa’s red and white outfit and flowing white beard reminds us of his great ancestor, Saint Nicholas, who saved the three poor sisters from being sold into slavery by providing them with dowries so that they could be decently married. I always liked that story and I find in our Santa the embodiment of that generosity – a virtue which we hope will outlast the season and stay with us into the New Year, no matter how many disappointments land on us. As for Santa’s reindeer, the temptation is to think that these are (like Prince Albert’s tree) some kind of cultural import. Not so. The bone fragments of reindeer consumed by humans have been found in Ireland, dating back to our ancestors of 35,000 years ago when land bridges linked us to other territories far and wide.

I have not enough space to consider traditional Christmas carols, though their history is as interesting as any other. It’s true to say too that most of the lyrics are wonderful (‘… when the snow lay round about, deep and crisp and even’) although their constant playing three or four weeks before Christmas Day takes a good deal of the shine off them and, as mentioned, makes shopping in the local supermarket something of an ordeal. But it is the endless playing of popular Christmas songs that is a particular penance.  I always had a soft spot for Brenda Lee, and still have, though having to listen to her endlessly Rockin’ around the Christmas Tree for weeks every year has put a severe strain on our relationship. And I do not trust myself to put down on paper anything about that chap who sings that he wishes it could be Christmas every day. Is he mad or what? 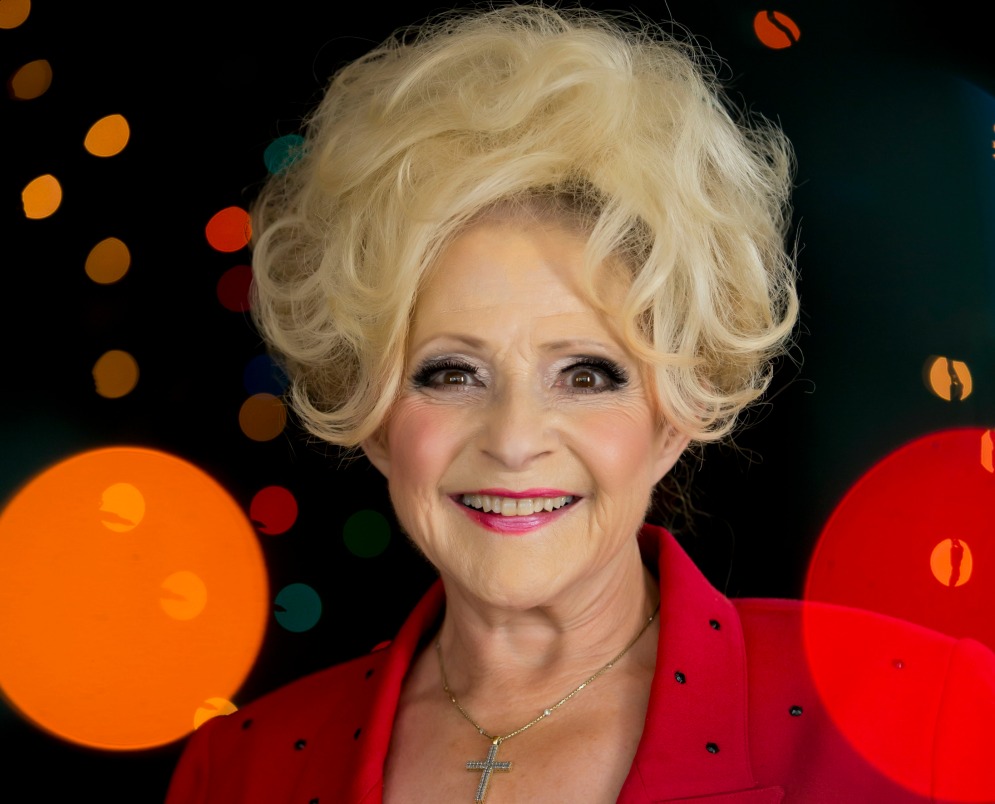 I always had a soft spot for Brenda Lee, and still have, though having to listen to her endlessly Rockin’ around the Christmas Tree for weeks every year has put a severe strain on our relationship

Finally, I want to thank you so much for taking time to read this piece. Despite the objections and reservations outlined above, I want it known that I intend to enjoy my festive season, as always. And that I wish the blessings of the season on each and every one of you and on your families and friends.