Was a time, growing up, when there seemed to be only two posh hotels in Dublin, The Gresham on O’Connell Street and The Shelbourne on St.Stephen’s Green. This curiously came back to me with the announcement in December that John le Carré had died. I recalled that the former British secret service agent and author of those Cold War espionage novels booked into the Shelbourne when he came to Dublin for the filming of  The Spy Who Came In From the Cold – perhaps his best novel.

Also in town for that film, Richard Burton and his new wife Liz Taylor opted for the Gresham.

The Burtons arrived in Dún Laoghaire on the mailboat and were whisked into the city in Liz’s Rolls Royce, driven by her French Basque-béreted chauffeur and bodyguard Gaston Sanz.

Their Gresham suites occupied an entire floor of the hotel. At the time their first marriage was less than a year old. On arrival they were none too impressed by the Gresham’s luxurious double bed. Simply, it was not wide enough. A much wider bed was hurriedly made to fit their requirements. They stayed for 10 weeks as the film progressed at the newly opened Ardmore Studios in Bray and at various Dublin locations masquerading as post war Berlin. 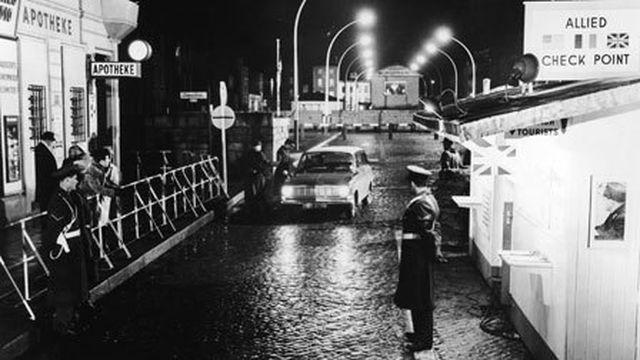 Smithfield, Dublin becomes a Berlin checkpoint for the Spy Who Came In From The Cold

Money was poured into building a section of the Berlin Wall, complete with watchtowers and Checkpoint Charlie with large signs ‘You are now leaving the American Sector’ in English, German, French and Russian.

Burton played the novel’s anti-hero Alec Leamas, a British spy in Cold War Germany. During one scene Burton was required to fall off the Berlin Wall which, by all accounts, was a difficult scene requiring him to perform lots of falling ‘takes’. Liz wanted to have a look but when she arrived on the cobbles in her Rolls Royce everything came to a halt as onlooking Dubliners surged over the film set cordons to see her.

During their stay Elizabeth Taylor’s Rolls Royce was again in the news, this time more seriously for an awful accident. With chauffeur Gaston Sanz at the wheel and Liz sitting in the back seat the Rolls struck and killed 78 year old Alice Maud Bryan while she was out for a walk on the Stillorgan Road. No duel carriageway then – just a narrow and windy road. Liz Taylor, Richard Burton and the chauffeur offered the Bryan family a message of ‘sincere and profound sympathy’. Two years later in

1967 the couple would return to the Gresham for just one more time when Liz gave evidence at the inquest into the death of Mrs Bryan. No criminal proceedings were ever issued but Liz Taylor left Dublin, never to return.

Just before he died John le Carré, appalled by the Brexit vote, told his friend and fellow writer John Banville that he was applying for an Irish passport. He told him ‘I am a European and I would like the passport of a European,’ He talked on the late Marian Finucane’s Radio 1 radio show of his Irish grandmother, Olive Wolfe, from Inchanattin, Rosscarbery, Co, Cork.

And which of our two posh hotels is the oldest? The Gresham Hotel on O’Connell Street opened in 1817. It was followed in 1824 by the Shelbourne on St.Stephen’s Green. Dublin’s oldest hotel, opening in 1809, is the Castle Hotel on Great Denmark Street, a very comfortable 4 star hotel. Alas, four stars doesn’t make it to the posh list.

Another report to gather dust? 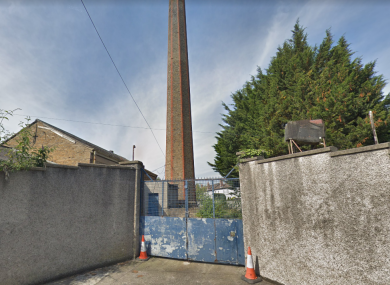 The Donnybrook Magdalen laundry before it was demolished

As if our year long Covid lockdown was not depressing enough, the 3,000 page report of the Mother and Baby Homes Commission was published. It joins a seemingly endless record of church and state abuses, The Ferns Inquiry, 2005;The Murphy Child Sexual Abuse Report, 2009 and The Magdalen Commission Report, 2013. This latest report caused some dissension by suggestion that along with church and state, we  were all more or less to blame – society in general and the victim’s families included. Was liability being blurred and softened – a let off for church and state? Certainly there were very different times then. But we also need to consider the hierarchy and pecking order in those oppressive times. The Church and its dogmas were very powerful influencers on a largely poorly educated population and what education they did receive was conditioned at the hands of nuns, brothers and priests. In Ireland that was mostly Catholic but other Christian denominations were involved too. The first Magdalen Asylum in Dublin was on Lower Leeson Street, founded in 1765 by the Anglican Church of Ireland.

If a touch of bitterness might be creeping in here is because my own family was affected. It began before I was born. I only discovered in my mid-thirties that one of my aunts was missing. She lived  in a small room, one window, one bed, chairs, a small TV, a little table and surrounded by holy pictures at the Crescent on Donnybrook Road, one of four Magdalene laundries in Dublin. It was run by the Religious Sisters of Charity, the same nuns that introduced me to my first schooling – junior infants or ‘low babies’ as it is called. Before she died a cousin and myself went to visit her, we asked if she would like to be buried with the rest of her family, she declined. She was buried in Donnybrook with her fellow Magdalens.

Thankfully, in the case of my family, something resembling good happened. My aunt’s son remained in the family. As a child I believed he was my youngest uncle. As a young man in a small community he was bound to feel some uncomfortable pressures and like untold numbers of Irish he left Ireland and began a good new life in England. He married and raised a family of his own and lived into a ripe old age doting on his many grandchildren. He did return a few times to visit his birth mother in Donnybrook. He died a few years ago at his home surrounded by his English family.

Just a year ago An Bord Pleanála approved plans by the Pembroke Partnership for an apartment complex on the former Magdalene Laundry site in Donnybrook. The developers, in light of the sensitive nature of the site proposed an art work installation and a wall plaque acquiescing the site’s former use. The complex will retain the chimney stack, a protected structure honouring the women who were forced to work here.

The nuns sold the property for millions. These nuns also ran another Dublin Magdalene laundry at their St Mary’s High Park Convent in Drumcondra.

Thankfully we have come a long way and Ireland is a much more mature and caring place. But we should remember that it was only in 1972 our constitution was amended – that ‘the special position of the Holy Catholic Apostolic and Roman Church’ would in future include ‘other named religious denominations’ and that even today our national TV and Radio station still broadcasts the Roman Catholic Angelus- ironically, the announcement of a virgin birth. 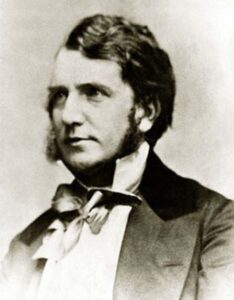 We have got used to celebrating Dublin’s Bram Stoker Festival. But are we neglecting a man who employed Brams as an unpaid theatre critic of the Dublin Evening Mail- he might have deemed free admission to the theatre as payment enough. That newspaper was co-owned by Sheridan Le Fanu also a writer of Gothic tales, ghost stories and predating Dracula by 25 years with Carmilla, a lesbian vampire, no less.

Joseph Thomas Sheridan Le Fanu was Dublin born at 45 Lower Dominick Street into a literary family of French Huguenot, Irish and English ancestry. His father became the Church of Ireland chaplain to the Royal Hibernian Military School in the Phoenix Park. Living here the young Sheridan would have got to know the Phoenix Park, the church and village of Chapelizod and the then largely rural countryside that is today a built-up Ballyfermot with an open space called Le Fanu Park on Le Fanu Road. All these areas became part of his stories, most famously in The House by the Churchyard. This haunted Georgian house, still there and maybe still haunted, adjoins Church Lane adjacent to St. Laurence’s parish churchyard in Chapelizod.

The night I won the Eurovision Song Contest