Think of the English countryside, and rolling acres, medieval cathedrals, pretty stone villages and ancient sites spring to mind. Look no further than Wiltshire, home to Stonehenge and Salisbury Cathedral. Its big skies, ancient inns and pubs, rolling chalk hills, bustling market towns, and world famous gardens and houses offer multiple choices. It also has a few surprises – where else can you shop in the middle of a prehistoric stone circle , watch cheese mature in a cave, go lion spotting at a stately home, or test out a Tudor bed?

Easily accessed from both Bristol and Heathrow airports, you can choose from luxury hotels, top rated B&Bs, or even go glamping . Alternately, with Wiltshire’s range of ancient inns and comfortable Georgian stage post hotels, you can travel the old coaching routes in style. Car hire is ideal to maximise sightseeing, but many market towns have rail connections and good deals.

From Bristol airport, it’s an easy trip to neighbouring Somerset and Cheddar. Deep in the magnificent steep sided Gorge, overlooked by agile mountain goats, lies Gough’s Cave, dating from the Ice Age. Its dripping stalactites form fantastical calcite shapes, many beautifully spotlit. Look out for Cheddar Man, at 9,000 years old, Britain’s oldest skeleton. The cave still matures some of the local cheddar cheese, as it has done for centuries. Nearby, recently re-designed Cox’s Cave also uses spotlights to enhance the range of mineral rock colouration.

Stroll down the village to The Cheddar Gorge Cheese Company and its working dairy. Learn about `cheddaring,’ watch, from the viewing gallery, how one of the world’s most famous cheeses is made – and of course, sample some before buying!

A short drive takes you the beautiful Somerset city of Wells, with its spectacular twelfth century cathedral, noted for medieval sculptures on its West Front. Stroll outside to see its working clock, installed in 1390, and also Vicars’ Close, the oldest surviving residential street, with original buildings, in Europe.

Another highlight is the nearby Bishop’s Palace, famous for its moat and mute swans. The magnificent rooms are open to the public, but you can simply enjoy the peaceful early morning or late evening views by walking around the moat, admiring the lawns, buildings and mediaeval drawbridge.

Wells has several comfortable coaching inns and Georgian hotels, and the fifteenth century Swan Hotel knows how to welcome travellers. Some rooms have cathedral views. Recently sympathetically restored, it also has excellent locally sourced food – dinner there is popular.

The magnificent Stourhead, Wiltshire’s most famous garden, lies a short drive away. Once described as a living work of art, it is instantly recognisable from films/TV series ranging from `The Pallisers’ to `Pride and Prejudice’ (2005). Try to arrive early for their uncrowded best. Allow several hours, for a House and cafe visit, before leaving for another top Wiltshire site nine miles away – Stonehenge.

Stonehenge, the most famous prehistoric stone circle in the world and a UNESCO World Heritage Site, dates back some 5000 years. To ease inevitable crowds, visitors now go by shuttle bus to view the monument. You can disembark early to walk the final steps. Try to book your pre-timed ticket as near to sunrise and sunset as possible, the most atmposheric times. Don’t miss the excellent audiovisual about how the landscape and monument have changed, or the Exhibition. Stonehenge also has an excellent cafe. The car-free can take the Stonehenge Tour, picking up from Salisbury rail station and city centre, to the stones.

Nine miles will take you to Salisbury, imortalised in the paintings of Constable and Turner. Quintessentially English, the spire of this thirteenth century cathedral, the tallest in England, rises 404 feet above the Plain. Salisbury grew rich from the medieval wool trade and has retained its town centre, with bustling shops. It also has a Cathedral Close filled with elegant houses. Mompesson House, and Arundells, (once home to former UK Prime Minister Edward Heath), plus their gardens are well worth visits. Theatre lovers should check out the excellent Salisbury Playhouse.

The Cathedral has the added attraction of its own original and well preserved copy of the 1215 Magna Carta, now on public view. No interest in ancient documents? Well, this one has inspired several international constitutions, guaranteed equal rights under the law and set the weights and measures we know – just for starters.

Early sunny mornings and evenings display the Cathedral’s stained glass windows at their peaceful best, and if you’re lucky, you might also hear the Choir. Nearby is the excellent Salisbury Museum, reflecting the town and region’s landscape and achievement from earliest occuptation.

The welcoming White Hart Hotel, an ancient coaching inn re-designed in the 18th century, is five minutes walk from the Cathedral. Salisbury’s restaurants include the popular and informal Italian style Leonardo’s, a perfect end to a full day.

It’s less than 30 miles on to the atmospheric Avebury. Less crowded and more peaceful than Stonehenge, a massive ditch surrounds the world’s largest enclosed stone circle. No surprise that it is most atmospheric at dawn and sunset. After your stroll, enjoy a snack at the National Trust Cafe, and ponder the purpose of its Neolithic and Bronze Age stones.

Avebury Villege has achieved more modern fame, thanks to television. Its Manor House, dating from Tudor times, has been decorated in styles of various periods, reflecting its occupants – and you’re encouraged to try them out. So, lie on the Tudor bed, listen to the gramophone or read the Library newspapers. Don’t miss the beautiful garden and dovecote.

The medieval village of Lacock may look familiar. Not surprising, as it has been the backdrop to film and TV productions such as `Pride and Prejudice,’ Èmma’ `Cranford’ `The Mayor of Casterbridge’ `Tess of the D’Urbervilles’- and even `Downton Abbey.’ Invest in a guidebook at the National Trust shop, (the Trust now owns the village), and wander around, identifying your favorites scenes!

The beautiful Lacock Abbey, once a Nunnery, was later adapted into a family home, and is filled with centuries of history and achievements. William Henry Fox Talbot is best known as the creator of the first photographic negative – you can look out from the window space where it was created, and visit the Museum. It’s a also worthwhile exploring the Stable Yard and The Cloisters, familiar to Harry Potter film fans!

Lacock isn’t the only local film set. Down the A4 to Chippenham lies Corsham, where `Remains of the Day’, and `Poldark’ cameras rolled. Nearby also is Castle Combe, dubbed the prettiest village in England, and also home to market scenes in `War Horse.’

Chippenham is an old market town, and staging post, and The Angel Inn, now BEST WESTERN PLUS Angel Hotel, dates from the seventeenth century. Comfortable and atmospheric, it has a modern extension and pool to the rear. However, some of the most sought after rooms, unsurprisingly reached by winding and creaky corridors, are to be found in the original inn over looking the town square.

Chippenham is also near to one of the most popular restaurants in the area,`La Flambe’ in nearby Sutton Benger. Offering a superb French twist to local produce, it’s the (affordable) perfect end to your Wiltshire journey… 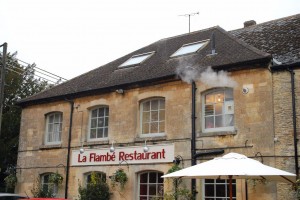 If you’re looking for a added extra, why not try…

SHOPPING…. the McArthur Glen Designer Outlet Swindon offers good bargains. Dents is famous for gloves, so pick up some excellent value at their factory shop in Warminster.

TRAINS…. Train buffs will enjoy the Steam Exhibition at the old railway works in Swindon

HOUSES AND GARDENS… You’re spoiled for choice here – Bowood, Longleat and Wilton House have gardens designed by Capability Brown. Great Chalfield Manor, near Melksham, is an enchanting old Manor House with an Arts and Crafts garden.

Longleat has it all – magnificent high Elizabethan house, plus a world famous Drive-Through Safari Park, and is worth a full day trip.

The gardens at Iford Manor were created by Harald Peto who created Romantic Italianate style gardens, terraced and set against valley views.

HORSES…. explore the white chalk variety, famous to Wiltshire, and carved into its chalk hills. Nearby Westbury and also Pewsey have good examples, and can be reached by train.