Maretta Dillon chats with Irish wildlife cameraperson and television presenter, Colin Stafford-Johnson, one of the world’s most acclaimed and internationally awarded filmmakers. His shows include: Secret Life of the Shannon; Wild Ireland, Edge of the World; Living the Wildlife and Wild Ireland. Colin began his career filming tigers in India earning acclaim and respect for his fascinating portrait of one tiger – Broken Tail. 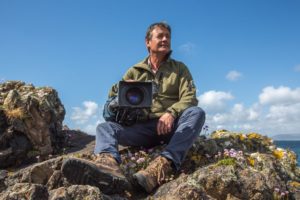 Tell me about Living A Wild Life tour. What’s it all about?
On the night there will be a chat for an hour with lots of film clips that I have taken over the years. I spent a long-time filming tigers in India. That was my bread and butter for years. Then I came home and began making wildlife programmes here. So, the first hour tends to more sort of overseas. And then the second part would be more Irish based.

Is it just you on stage?
Just me. We did some shows last year and they sold out. So, it’s nature and travel. You don’t have to be a massive wildlife buff. But I am encouraging people to come along and talk about wildlife. I’m always trying to get the message out there. People are interested in the Irish stuff because they can relate a lot more to it. They can see how their actions may affect the creatures that live around them.

You have a really busy life.
It’s topsy turvy always moving here, there and everyplace. I bought that bag over there about six years ago and I don’t think it’s been empty yet. There’s always been something in it. So tomorrow (Colin is heading to Iceland) it’s a cold place so it’s full of cold gear but then it could be a warm place and it’s my warm place bag.

Your home is in Mayo.
I was actually brought up in Cabinteely in Dublin. That was my home. That was where I was raised. We had a garden centre and nursery business there. My dad (Barney Johnson) was the first TV gardener in Ireland. I really left Dublin when I was about 20. Lived in the UK and then overseas for years traveling around the world.

What made you take up filming?
I only really discovered that was what I wanted to do when I was about 24 or 25. I had taken a few years off after school to travel around the world, go backpacking and that sort of stuff but always with nature as a focus. Those trips really changed my view of the world. I could see how quickly things were changing – this was in the mid-80s. Half the world’s rainforest has gone since I left school. That rate of change had never happened before.

I’m not like some crazy wild passionate filmmaker necessarily. Wildlife is much more the thing. That’s where my interest lies. Filming is just a tool for me.

How did you learn to become a wildlife photographer?
I did a degree in the University of Derby in the UK which was the first degree of its kind in the world. It was a degree in biology and filmmaking and taught by people from the BBC Natural History unit. Most importantly, really in this business, I made connections because it’s really about being in the right place at the right time and getting to know people in the industry and all that sort of thing. 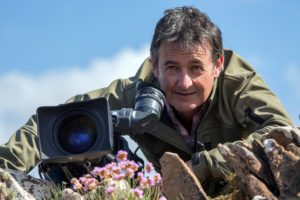 What are you working on now?
The next is a series for the BBC called First Year on Earth which is about young animals growing up around the world. I followed a sea otter up in Monterey, California and now I am following an arctic fox cub in Iceland. I’m hoping it’s still there because you never know. The first year of life is a difficult time. A month ago, I left eight little fox cubs. When I get back, I am trying to follow one of them, the white one.

Would you say that you are reasonably hopeful about the state of the environment?
Well, I mean in Ireland in the last 20 to 30 years we’ve done a really bad job. But you know there is growing awareness out there. I think we’re getting cleverer with how we are doing things but it’s just that it’s always a battle. You slow down the rate of loss a little bit sometimes. There’s still the potential to make everything much better. Decline isn’t inevitable.

I mean farmers did what they were asked to do in this country which is make the land much more productive, but the result is that what’s productive for farm animals is not productive for wildlife. We need to get a bit cleverer with how we use our land. We don’t really have any proper land management strategy. That’s not very sensible. Other areas which are economically poor for farming might be great for wildlife.

So, you don’t think that it is a losing battle?
I’ve worked for years in India. It’s an extreme example but I followed one tiger. I met her in 1999, she became the world’s most famous tiger. They reckon she raised between 40 and 50 million dollars in terms of tourism. I met the man who shot her sister who got a hundred dollars. The Indian government get the economical argument now around preserving wildlife and habitats.

Back to the tour. Do the audience get to ask questions?
Oh. Absolutely. There is a Q&A at the end with lots of questions. In Ireland, the audiences are very interactive particularly kids. So that’s encouraging.